Some might call the 2021 Toyota Tacoma — the current platform is now five years old — a little long in the tooth, but if it ain’t broke why fix it? Sure, the mid-size pickup might not have the latest bells and whistles but remains as versatile as ever, happily performing double duty for work and play.

“The Toyota Tacoma is the truck with a global reputation for adventure — the product of more than 80 years of designing and building trucks designed to conquer anything the terrain and the weather can throw at it,” says Toyota Canada vice president Cyril Dimitris in a press release.

“The adventure starts now, with 16 models across three body configurations and multiple trim levels — all ready to keep up with active Canadians who demand 110 per cent from their truck.” 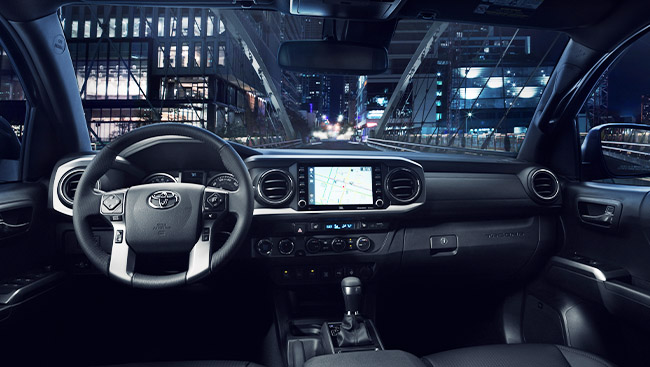 At the core of its capability is the tried-and-true 3.5-litre V6 engine making 278 horsepower and 265 lb-ft of torque. Manual transmission enthusiasts will be pleased to hear a six-speed stick option is sold, somewhat of a rarity in 2021 but a welcome one, although Darpan’s media loaner for the week utilized the six-speed automatic gearbox.

All models feature a 4x4 system, limited slip disconnecting differential and two speed transfer case to ensure traction is always there when needed. The independent double-wishbone front and multi-leaf rear spring suspension rides comfortably on paved roads, even during towing, and transitions seamlessly to rougher terrain if the need arises.

On the subject of hauling, a factory-fitted Class IV weight distribution hitch, seven-pin wiring harness and Trailer Sway Control Technology iare standard. The Tacoma is rated to tow up to nearly 3,000 kilograms. Styling-wise the exterior may not be as fresh as it once was, however the vehicle doesn’t look too dated compared to other market competitors thanks to the ahead-of-its-time design. For example, the smoothly sculpted body panels and bumpers, protruding grille, flared wheel arches and available LED head and foglamps.

Loading and unloading the pickup couldn’t be easier. The Easy Lower & Lift Tailgate can open and close using just finger pressure (no more slamming!) and the composite bed is made out of a fibre-reinforced, sheet-moulded material that Toyota says is dent and corrosion resistant, and has a greater impact strength than steel. Indeed, I loaded some bicycles and outdoor gear for an afternoon of fun and not a scratch was seen afterwards. 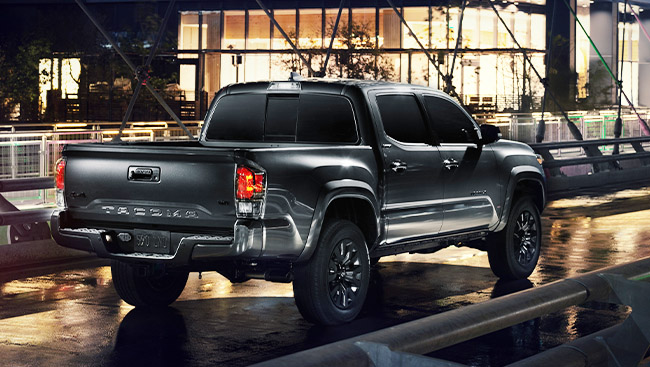 The interior is quite nicely equipped for the segment: a seven-inch (upgradable to eight-inch) Display Audio infotainment touchscreen sits in the middle of the dashboard, and is Apple CarPlay and Android Auto compatible via plugging in a USB cable. The front seats are heated, and a sliding rear window is a blessing for getting some air circulation especially in the summer months.

Our vehicle’s particular configuration, which was the four-door Double Cab new-for-2021 Nightshade edition with a short five-foot cargo bed (two-door Access Cab and a six-foot bed is also offered on different grades) had some extra goodies including blacked out details, premium JBL stereo, 360-degree camera and leather seating.

While a fourth-generation Tacoma isn’t likely to be announced for another year or two, the 2021 version continues to deliver the goods, whether you intend to use it on the job, out on the trails, or preferably, both.