Mitsubishi’s bread-and-butter Outlander was overdue for an overhaul for some time now, the third generation introduced nearly a decade ago. This year it got one, and is the first to benefit from the Renault-Nissan-Mitsubishi as the crossover is built on the Rogue platform.

"Based on the product concept 'I-Fu-Do-Do,' which means authentic and majestic in Japanese, the all-new Outlander has been crafted into a reliable SUV with significantly upgraded styling, road performance, and a high-quality feel to satisfy the needs of customers who want to expand their horizons and take on challenges of every kind,” says Mitsubishi Motor Corporation CEO Takao Kato in a media release.

Big optional 20-inch wheels alloy wheels installed below flared fenders, as well as the jet tailfin C-pillar, provide a sporty look. And at the back the somewhat conservative Hexaguard Horizon aesthetic language is introduced: embodied by a rounded liftgate cut out reminiscent of overseas models like the Pajero and Montero that wear an external spare tire, and the long, flat taillamps. 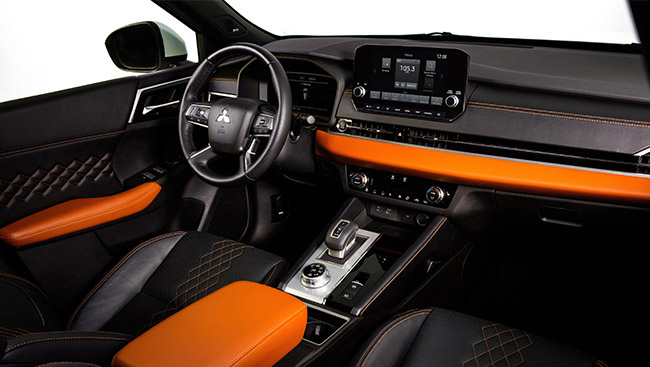 Most impressive of all regarding the latest version is perhaps how upscale the interior has become. The horizontal theme carries over here where the dashboard runs nearly the width of the in cabin. Premium two-tone quilted leather upholstery covers the seat cushions and door panels, and a “floating” centre console houses an innovative shifter utilizing a sliding mechanism for gear selection.

While classified as a compact crossover, the amount of space inside is quite generous and there is standard third row perfect for impromptu family getaways. The two sets of rear benches fold in a multitude of ways and permit only one side to be stowed meaning a passenger or two to still be seated at the back if a long piece of cargo is loaded, for instance.

Mitsubishi recently announced the later arrival of the highly anticipated 2023 plug-in hybrid variant, however Darpan evaluated the gasoline offering propelled by a 2.5-litre four-cylinder engine developing 181 horsepower and 181 lb-ft of torque. Mated to an eight-step CVT the SUV is quiet, easy to drive and handles admirably boasting a stiffer underlying structure featuring a much higher torsional rigidity.

Known for its traction-friendly Super All-Wheel Control system, the new Outlander adds brake active yaw control for the rear axle too so braking force may be applied to each corner independently to optimize grip in turns. Also helping maintain stability during slippery conditions is the model selector — available settings include Eco, Normal, Tarmac, Gravel, Snow, and Mud — that tailor driving dynamics for different surfaces. 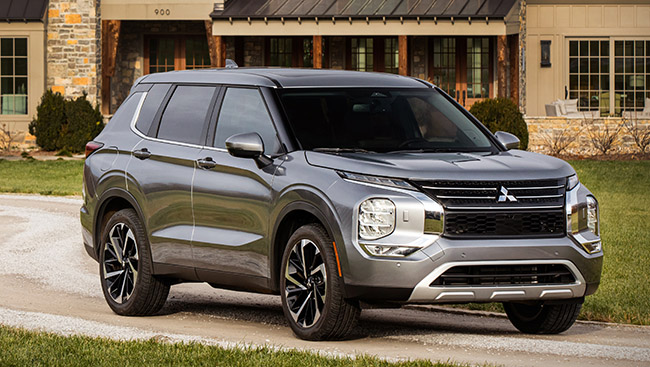 When travelling down a steep decline, hill descent control automatically kicks in slowing the vehicle down leaving the person behind the wheel free to concentrate solely on steering.

Top-of-the-line Touring grades, for example the unit Darpan tested, include for the first time a fully digital 10.2-inch LCD instrument cluster. The on-screen information can be customized to show different virtual gauges, music selection, trip computer and so on.

The Tesla Model 3 will no longer top the list of Canada's most rebated electric car. Transport Canada says the popular battery-operated vehicle was removed from the eligibility list for the federal zero-emission vehicle rebate in late November. The carmaker just raised the base price for the Model 3 to $59,990, well above the $45,000 qualifying price to get the $5,000 rebate.