Benjamin Yong, 12 Jul, 2018 03:50 PM
The wave of pure electric, hybrid and other fuel efficient vehicles continues to get bigger, as evidenced by the Automobile Journalists Association of Canada seventh annual EcoRun event held in June.
Taking place for the first time in Atlantic Canada, the intention of EcoRun is to showcase the newest green wheels on sale in dealerships, as well as comparing real-world fuel consumption to statistics published by manufacturers and Natural Resources Canada (NRCan).
“It’s a true joy to be in Moncton today, as this event wouldn’t have been possible a few years ago. New Brunswick has obviously embraced eco-friendly vehicles with a lot of charging infrastructure throughout – it’s been the fastest growing electric vehicle market in the country, and one that's fully connected,” says co-chair David Miller, referencing the availability of not just Level 2 but also Level 3 fast chargers capable of bringing battery energy level from zero to 80 per cent in 30 minutes.
“But this event isn’t just about pure electrics and plug in hybrids. Automakers are doing an admirable job in lowering fuel economy throughout their product lineups, and that’s despite a lot more SUVs and trucks.”
Indeed, the segments represented ran the gamut and included a total of 19 entries comprised of subcompacts, full-size sedans and even a minivan. Journalists were assigned six models each, one for every leg of the 570-kilometre journey taking participants from the starting point in Moncton, through several cities, and eventually to Fredericton. Below are four standout examples I had a chance to drive over two days.
2018 Lexus LS 500h
Lexus’ flagship entered its fifth generation this year, more luxurious than any iteration previous. The hybrid version is especially cutting edge, using a powertrain derived from the LC 500h Coupe combining a 3.5-litre V6 gasoline mill and two electric motors to produce a net 354 horsepower.
NRCan rates the LS 500h at 9.1 L/100 km in mixed city and highway conditions, and drivers cumulatively managed 8.0 L/100 km.
2018 Hyundai Ioniq Plug-in
The plug-in was the third and final piece to arrive in Hyundai’s trio of Ioniq cars that also feature standard hybrid and pure electric offerings. The 1.6-litre internal combustion engine and electric motor are mated to a sporty six-speed double-clutch transmission with optional paddle shifters, giving a bit of an extra kick to the combined 104 horsepower and 109 lb-ft of torque output. In zero emissions mode, this Ioniq can travel nearly 50 kilometres on a full charge.
NRCan rates the plug-in at 3.35 Le/100 km in mixed city and highway conditions, and drivers cumulatively managed 3.0 Le/100 km. 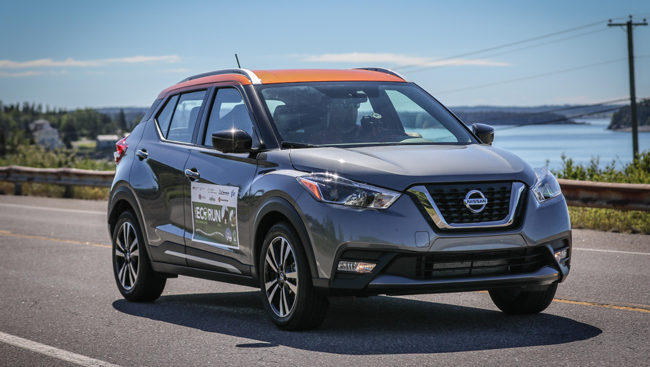 2018 Nissan Kicks
Entering the small crossover fray is the Nissan Kicks, a quirky, manoeuvrable CUV slotting underneath the Qashqai and aimed at young urbanites. Practical and attractive, the Kicks doesn’t try to get too fancy, running a 1.6-litre four cylinder and CVT under the bodywork. Nevertheless, the fuel thrifty setup in a relatively lightweight package does the job at being friendly on the wallet and the environment.
Overall, among all the vehicles journalists managed to achieve an average of 4.86 L/100km vs. NRCan’s official 6.45 L/100 km, or an improvement of 1.59 L/100 km.
2018 Toyota Camry Hybrid
Transformed from sensibly styled to sexy new four-door for 2018, the Camry is lower and wider than before and highlighted by a fresh lower grille dominating most of the front fascia. The next-gen Toyota Hybrid System and 2.5-litre four-cylinder Dynamic Force Engine work together to generate 208 total horsepower, and a continuously variable transmission boasts a sport setting that can use battery reserves to boost performance.
NRCan rates the Camry Hybrid at 5.1 L/100 km in mixed city and highway conditions, and drivers cumulatively managed 4.8 L/100 km.
Prev Next

Over the past 10-years I have become a real fan of the Cadillac line of vehicles as they are attractive and excellent handling and ridding vehicles.

“We call the Velar the avant-garde Range Rover. It brings a new dimension of glamour, modernity and elegance to the brand. The Range Rover Velar changes everything,” says Land Rover chief design officer Gerry McGovern.

Bigger and bolder than ever before, the gorgeous vehicle has striking bodylines. If you’ve seen the sedan variant, the story is much the same save for, of course, the tail section.