By Benjamin Yong, 21 Jul, 2015 11:39 AM
The white sand, aqua blue water, and tall palm trees of Florida’s South Beach provide an ideal backdrop for almost any work or play situation. And, as it turns out, it’s also a great place to stage a sport utility vehicle launch.
I know what you’re thinking – an SUV in Miami? Really? Not just any SUV, however, but Honda’s brand new subcompact crossover, the HR-V. Will Smith’s 1997 pop hit ‘Miami’ leaked out of massive speakers atop a balmy rooftop in March, where journalists received their first real up-close experience with the uniquely sized and positioned vehicle, which Honda hopes becomes an instant hit.
“We are targeting 12-month sales of 10,000 units. It will introduce a new generation of buyers to the Honda brand,” says Jean Marc Leclerc, vice president of auto sales and marketing, who referred to the HR-V as the “most powerful new weapon in the light truck arsenal.”
Honda, along with a handful of other manufacturers like Mercedes with the GLA and most-recently Mazda and their CX-3, are responsible for creating the tiny SUV automotive segment. Size-wise, the HR-V (2,610 millimetre wheelbase) is neatly nestled in-between the Fit (2,350 mm) and the CR-V (2,620 mm), and aimed at singles, dual income no kids couples, and empty nesters wanting a fun, sophisticated ride that doesn’t compromise versatility.
Hayato Mori, senior product planning and business development senior manager, calls the latest offering a mix of a coupe, SUV and minivan, taking the best traits of all three. Indeed, on the outside, the blacked-out headlight-grille combo and hidden rear door handles give it an instant sporty appeal; the slightly raised stance and fender flares suggest weekends driving to mountain bike trails; and the wide tailgate and cargo area says “Take me on Costco runs.”
Miami’s twisted highways, long, beachfront straightaways, and urban roads provided a great testing ground for this vehicle-of-all-trades. Accompanied by two driving companions, I took first shift behind the wheel. The heart beating underneath the hood of the HR-V is a 1.8-litre four-cylinder i-VTEC engine pumping out 141 horsepower and 127 lb-ft of torque. Depending on the trim (LX/EX/EX-L Navi), you can have front or all-wheel drive with a continuously variable transmission or six-speed manual transmission (base LX and EX only). 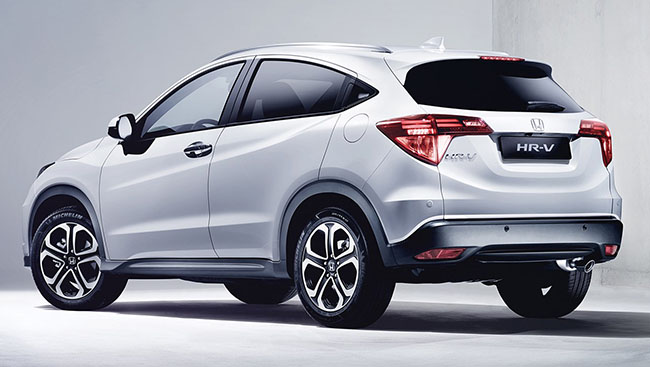 During the presentation, Mori mentioned that one of the many goals of the design was to strike a balance between fuel economy and power output. Two-wheel drive variants with the CVT are the gas thriftiest of the bunch, netting an estimated 7.6 L/100 km of combined highway and city driving. With the six-speed, consumption rises a little, to 8.3 L/100 km. Finally, the all-wheel drive with the CVT holds a middle average of 8.1 L/100 km.

Taking out a manual EX, I was delighted at how crisp the shifts felt. The manner in which the lever satisfyingly clicks into each gear is reminiscent of Honda’s racier models like the Civic Si. Handling definitely feels more car than van or even regular-sized crossover-like, something that was thoroughly evaluated during an emergency manoeuvre initiated entering an onramp to avoid a confused motorist. The four-wheel disc brakes with ABS and electronic brake distribution are also excellent.
A unique feature is the auto brake hold, operated by a switch underneath the electronic parking brake on the centre console. When on, the driver is free to take his or her foot off the pedal and the brakes will continue to be automatically held until the accelerator is tapped. Even during our short stint with Metropolitan gridlock, it proved its usefulness.
As a passenger on the return drive, I revelled in the 998 mm of rear legroom, while playing with the second row Magic Seat – identical to the one found in the Fit – which allows for a variety of folded configurations to accommodate large or oddly-shaped objects. For instance, a surfboard can be squeezed in when you activate what Honda has named “Long Mode,” where you tilt both the front and rear passenger seat at the same time. Folding both rear seats is known to as “Utility Mode,” yielding a maximum 1,665 litres (1,631 if AWD) of carrying capacity. There’s even a “Tall Mode” where the base of the rear seat flips up to make room for something like a potted plant.
The 2016 Honda HR-V is built in Celaya, Mexico, and goes on sale this summer. Pricing starts at $20,690.
Prev Next

015 Jaguar XJL Portfolio AWD, the L denoting the long wheelbase version of Jaguar’s full-size flagship four door, simply has to be seen, and sat in, to believe just how long it is: 5,252
millimetres in length, with 1,120 mm of rear legroom, which is 129 mm more than the standard wheelbase.

After testing a car, I always ask myself if I could live with the car, would I buy this car, and is it fun to drive. In the case of the Camry it is yes in all categories. I have to say that I was pleasantly surprised at how much I enjoyed all the aspects of the Camry as it does a lot of things well.

First thing you see opening the door of the Beetle is the interesting two tone cloth and leatherette seats. The checked beige/brown cloth is interesting; during the time I had the car, people's feeling were mixed as to its appearance