Hyundai is really mixing things up in an otherwise fairly mundane passenger EV segment with the launch of the all-new IONIQ 5. Looking like nothing else on the road, the crossover sports neo-classical design, a car-esque driving experience and can travel further on a single charge than expected at its modest price point. Read on.

“IONIQ 5 introduces the Hyundai brand to a whole new set of buyers, says José Muñoz, Hyundai Motor America president and CEO, in a press release. “Once behind the steering wheel, they are going to be shocked by the range, power, comfort, interior space and advanced technology. Owning one is going to be a new experience and lifestyle that only the IONIQ brand can provide.” 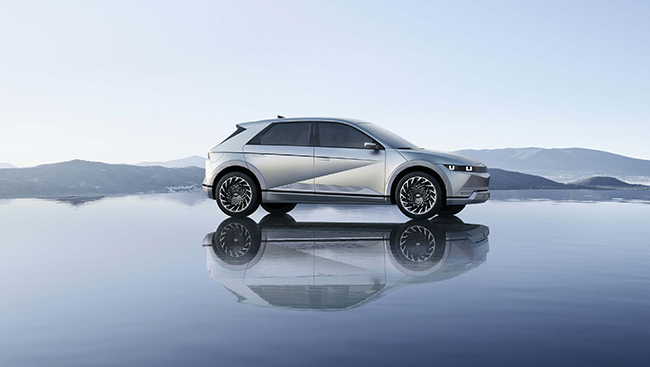 Aesthetically, the vehicle is surprisingly similar to the the manufacturer’s 45 concept — paying homage to the 1974 aircraft-inspired Pony Coupe Concept — debuted at the International Motor Show in Germany two years ago.

Intended capturing a sense the past, present and future, highlights of the exterior include the dot-matrix-like rectangular Parametric Pixel LED headlamps, angular V-shaped front bumper hiding daytime running lights along the top edge, and 20-inch aero-optimized wheels resembling rollers you’d see on a vintage European five-door. Though the hidden door handles are neat and reduce drag, they can be finicky when popping in and out and can pinch a finger if not careful. 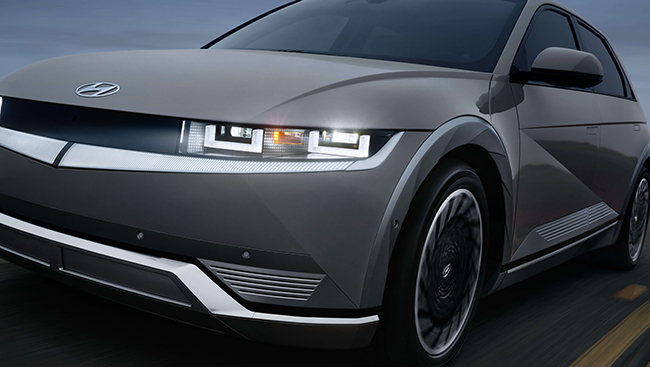 An extra-long 3,000 millimetre wheelbase — the longest in the North American product portfolio — not only allows for super-short overhangs resulting in a cool stubby appearance, but significantly opens up the interior space. And because the battery pack is mounted under the car, the cabin boasts a flat floor so passengers can stretch out their legs. The 5 also introduces the innovative Universal Island, a sliding centre console that can move forwards and backwards up to 140 millimetres meaning drivers can exit out either side.

Two 12.3-inch adjoined screens make up the instrument cluster and infotainment system. Operation is seamless (the decision to use a switch rather than rotary knob for tuning is perplexing, however) and similar to other current Hyundai and Kia offerings on the market, with the exception of a company-first augmented-reality head-up display. Projected onto the windscreen, functions such as turn-by-turn navigation become much more dynamic. 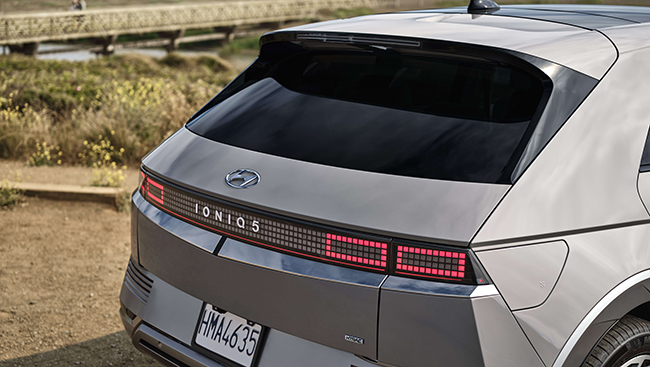 Customers can choose from a variety of trims combining different powertrain and battery setups to suit individual needs and budget. Darpan was loaned the Ultimate AWD grade packing dual 239-kilowatt electric motors and the higher-output 77.4-kilowatt-hour pack, together yielding 320 horsepower, 446 lb-ft of torque and a maximum range of approximately 400 kilometres. EVs have a reputation for being quick, and this pocket-rocket of an IONIQ delivers.

As mentioned unlike most SUVs, this smaller crossover handles like a hatchback thanks in part to the stiff underlying E-GMP platform it’s built upon. Parking is no problem as well, and there are many onboard technologies to help with that for example the 360-degree Surround View Monitor. The rear camera could use some kind of a self-cleaning feature, however, as oftentimes the picture was blurry after a rainy drive.

One additional thing to note: the paddles behind the steering wheel aren’t for shifting as the transmission is a single-speed. Pulling on them activates varying levels of regenerative braking, from zero to three, the latter strong enough to enable one-pedal-style driving. The 2022 Hyundai Ioniq 5 starts at MSRP $47,550.

The hybrid is powered by an ultra-efficient combination 2.0-litre four-cylinder internal combustion engine and two electric motors, sending 181 net horsepower to all four wheels via an electric all-wheel drive system, mated to a continuously variable transmission. Especially during these uncertain economic times where gas prices are at record highs, this fuel-thrifty setup is a welcome one.

Most compact SUVs seat five people. But there are a few that also come with a third-row seat to boost capacity up to seven passengers. While that third row is pretty small, it does give you an easier-to-park and less expensive alternative to a three-row midsize SUV. If this is an appealing option for you, check out the 2022 Kia Sorento and 2022 Volkswagen Tiguan.