Darpan News Desk IANS, 15 Nov, 2016
Salman Khan Productions is now going to create history. Hopefully, in more ways than one. On Monday, Salman Khan agreed to collaborate with Toronto-based Indian tycoon Ajay Virmani to make a historical film entitled Lions Of The Sea.
The film is based on the celebrated 1914 incident when the Japanese ship Kamagata Maru sailed with over 349 Sikh passengers to Canada but was denied entry.
Irrfan Khan will star as the Sikh lawyer Gurdit Singh who fought for the Kamagata Maru passengers’ right to enter Canada. 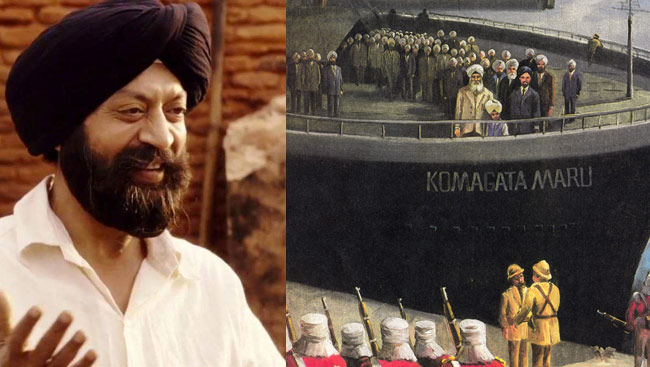 At a time when Donald Trump has unleashed an unprecedented backlash against ethnic races and the politics of racial exclusion in America, the saga of the valorous Sikhs who attempted to sail into Canada 102 years ago, acquires a a renewed relevance. Or, so Salman Khan felt when he heard about the Kamagatu Maru project and immediately expressed a desire to climb on board.
Says Ajay Virmani, “It’s an honour to a partner with Salman and SKF once again to ensure this historic story, which has challenged many racial laws in the western world is finally told.
The issues of racial acceptance and due processes are at the heart of the story and continue to be relevant in today’s world. We were pleased and humbled that the Right Honourable Prime Minister Justin Trudeau earlier this year recognized and apologized in the House of Commons for the unjust treatment committed against these migrants.
We are excited to announce this production will commence in 2017 as we celebrate Canada, its diversity as well as its 150th anniversary. This film will be co-produced by Vinay Virmani and Pauline Dhillon,” says Dr. Ajay Virmani of First Take Entertainment.”
Prev Next

How Salman Khan And Nephew Ahil Are Creating Trouble For Arpita

How Salman Khan And Nephew Ahil Are Creating Trouble For Arpita

John Abraham does not want to comment on the controversial episode when he stormed out of Comedy Nights Bachao Taaza as he was miffed with Krushna Abhishek’s acts on the show.