Troy Ribeiro IANS, 17 May, 2018 01:48 PM
Director: David Leitch
Cast: Ryan Reynolds, Josh Brolin, Morena Baccarin, Zazie Beetz, Julian Dennison, Karan Soni, T.J. Miller, Stefan Kapicic, Brianna Hildebrand, Eddie Marsan
Rating: ***
Like its previous edition which released in 2016, "Deadpool 2", too will elicit bipolar reactions. For, the story is absurd, funny and completely crazy. The great counterpoint in the film by far, is the complete abstinence from the development of the character as a protagonist. If you've liked the character so far, this new version will not disappoint you.
Also a little knowledge of the history in the Marvel Comic Universe will enhance the film's effectiveness for you. One tends to laughs more fully at the jokes when the underlying references are made.
"Deadpool 2" isn't as brilliant and cutting as any other Superhero films based on Marvel Comic characters, but it is a recognition despite its bizarre flavour.
The film takes off from its previous edition which was an origin film. Now, after a failed assassination of the head of a New York drug cartel, Wade Wilson aka Deadpool (Ryan Reynolds) returns home to his girlfriend Vaneesa Carlysle (Morena Baccarin) to celebrate their anniversary. The two decide to start a family but unfortunately his house gets raided by the drug lord's goons and Vanessa is killed. Wilson chases the criminals through the streets and engages on the road till a truck hits the drug lord and kills him.
Then, disappointed with life Wilson decides to commit suicide but illusions of his ex-girlfriend leave him confused. It is only after he goes to live with Colossus (Stefan Kapicic) and Negasonic Teenage Warhead (Brianna Hildebrand) at the X-Men Mansion, that he finds a new motivation to do something for the world. 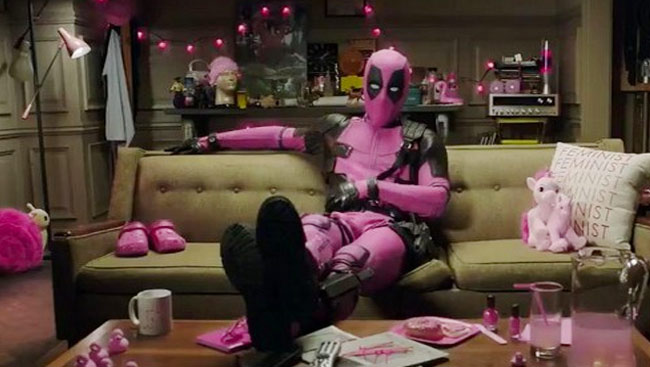 The task is to sober the young mutant Russell (Julian Dennison), who is struggling with problems of anger and he thereby seeks a meaning to his existence. In the middle of their association steps in the time traveler mutant Cable (Josh Brolin), who comes with reasons to assassinate Russell.
How Deadpool organises a team of mutants to fight Cable and save Russell, forms the remaining crux of the tale.
Deadpool with his charismatic irreverence was created to fit Ryan Reynolds, who repeats as Wade Wilson. He makes his character acceptable and funny. Josh Brolin as the villain Cable, is charismatic and he manages to convey the canvas of the character.
The best new figure is, undoubtedly, Domino embodied by Zazie Beetz, who fits perfectly in this world. Actors like Morena Baccarin and T.J.Miller return to continue with their roles. They are as passable as Bill Skarsgard, Terry Crews and Eddie Marsan.
After a brilliant opening credit, which keeps up with the counterpart of its predecessor, an absolutely chaotic film is developed, in a good way. Of course, you don't expect a clearly structured work in this series. But somewhere between gratuitous violence, the breaking of the fourth wall, action and emotional drama, there is a certain value-additions within irreverence and comedy.
What remains are some incredibly original ideas, which probably provide the biggest laughs of the year. Between the billing with other superhero movies and some extremely self-ironic jokes, the film is mounted astutely. However, the film could be annoying for an audience not conversant with the latest superhero films as the jokes and innuendoes would be lost.
Overall, despite a weak script, there is action aplenty throughout the film, but that doesn't bog down the viewing experience like many overcooked comic-book sequels. Also, the pendulum of the narrative swings from bloody mayhem to lewd comedy and back seamlessly and there are moments too where the film turns mushy. It is also advisable not to leave the theatre at the beginning of the final credits.
Prev Next

Narrated in a non-linear manner, "Daddy" is a biopic of Arun Gawli, a mill worker's son who became a gangster and then metamorphosed into a politician.

This is a brave and bright film with its heart in the right place and its gaze refreshingly free of a gender bias fixed firmly at the crotch level.

The major asset of the film is that it succeeds in maintaining interest and suspense despite obvious foreknowledge of the outcome.