Subhash K. Jha IANS, 01 Sep, 2017 02:07 PM
Director: R.S. Prasanna
Cast: Ayushmann Khurrana, Bhumi Pednekar
Rating: * * *
It's okay if you can't get it up.
There. I said it. It's taken Hindi cinema years and years to be liberated from the shackles of libidinous machismo. An actor called Ayushmann Khurrana has done.A He plays an ordinary guy with a routine problem with such conviction.
Ayushmann's Mudit in "Shubh Mangal Saavdhan" suffers from performance anxiety whenever he tries to make out with his bride-to-be, played with spunk and spontaneity by Bhumi Pednekar who is rapidly emerging as the voice of the mofussil woman.
In many ways, Bhumi is the hero of this remarkable film that's eventually bogged down by too many stereotypical characters associated with the small-town joint families.You know them, quirky, cantankerous, eccentric, whimsical but cute and honest.
Bhumi's Sugandha is one of the most sharply-written female heroes in recent films. Sugandha is deeply middleclass and proud of it. She resolves to marry the sexually dysfunctional (albeit temporarily so, but who knows!) Mudit not out of any false sense of bravado but because... well, this is the best she can get. And he is so goddamned devoted.
Once she makes up her mind to go with Mudit she will see her resolve to its logical (?) conclusion.
Screenwriter Hitesh Kewalya finds space in the cluttered canvas to give the couple breathing, if not breeding, space. Their first (aborted) sexual encounter in a cramped MIG flat in Delhi with sounds of songs and everyday conversation seeping subtly into their activity is done in a lengthy flurry of furious foreplay signifying nothing. It's a sequence filled with clumsy groping and slurply smooching played out with endearing honesty. 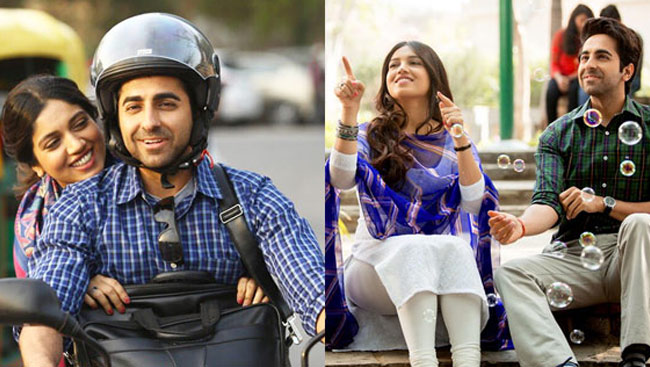 Another brilliantly written sequence of foiled passion has Sugandha trying to seduce Mudit at a picnic with a plunging neckline and groaning tips from an orgiastic song that goes "Come to me, Danny Boy".
Danny Boy's reactions of smothered frustration are priceless. Though the script constructs a case for the girl's bourgeois heroism (if you can't have cake have the crumbs) for me the real hero of the film is Ayushmann Khurana's Mudit. A man who loses his 'manhood' but holds on to his dignity even as the entire family scoffs at his condition, and emerges a hero in the most unforeseen ways.
Ayushmann expresses Mudit's erectile disenchantment with just a whisper of a look, a hint of despair... subtle sly and chic, this is an Everyman played with reined-in vigour and unostentatious valour. Though his character suffers from performance anxiety this is performance supremely devoid of any anxiety. Lamentably the script crowds Mudit's dignified anxieties with sniggering friends and scoffing relatives.
I wish the couple had been left alone by the screenplay to sort out their mutual problem. By bringing the entire family from both the sides into the picture to thresh out the problem on hand, the film ironically mocks the very malady that it so sensitively puts forward. Some of Ayushmann's scenes with his father and his future father-in-law with both the patriarchs trying to bully him out of his temporary dysfunction, are way too high-pitched and clamorous. It's like shooting down an injured birth with a canon.
The Big Indian wedding and the activities surrounding it ,have for some time now been a source of great colour vibrancy and irony in our cinema. But the wedding festivities have now become a cliché. We need to move on now.
"Shubh Mangal Saavdhan" serves a dish that's provocative and tongue-in-cheek. Director R.S. Prasanna steers the situations away from cheesiness even when a doctor tells Mudit: "You are making a big thing out of a small thing," and Mudit replies: "That's exactly what I am not able to do." 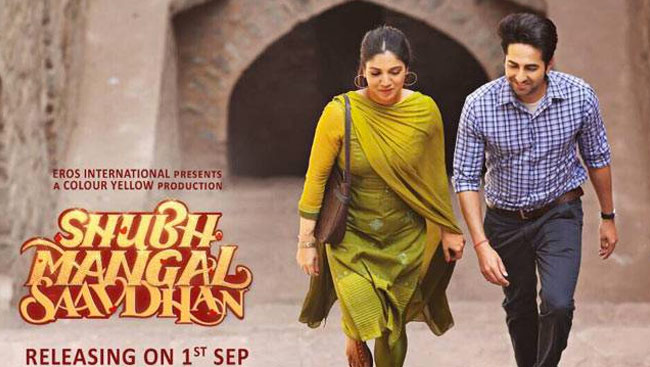 Ayushmann says such loaded lines and dips glucose biscuits into hot tea to explain his poignant plight to his wife-to be, with heartbreaking earnestness.
This is a brave and bright film with its heart in the right place and its gaze refreshingly free of a gender bias fixed firmly at the crotch level.
Prev Next

The major asset of the film is that it succeeds in maintaining interest and suspense despite obvious foreknowledge of the outcome.

Nothing is implausible if it works in cinema. After all, it is a part of getting the job done and hence, one does not complain when it comes to "Mubarakana" as it entertains you wholeheartedly.

A political drama with a detailed disclaimer about hurting the sentiments of anyone, Madhur Bhandarkar's controversial "Indu Sarkar" is a cleverly plotted propaganda film.