Troy Ribeiro IANS, 15 Aug, 2018 01:53 PM
Director: Reema Kagti
Cast: Akshay Kumar, Farhan Akhtar, Abdul Quadir Amin, Mouni Roy, Vinit Kumar Singh, Amit Sadh
Rating: * * 1/2
"Dreams should not die, and one should not lose hope," this is the underlying message of Gold, the film designed as a patriotic biopic. It is the story of how India won its first Olympic Gold medal for Hockey, post-Independence in the summer of 1948 in London.
Narrated in a linear manner, from the point-of-view of Tapan Das (Akshay Kumar) -- the hockey team's manager -- the film begins in Berlin 1936 when India won its third Gold medal for British occupied India.
While the Indians won the finals, it is the British flag that unfurls and the British Occupied India Anthem that is played at the awards giving ceremony. 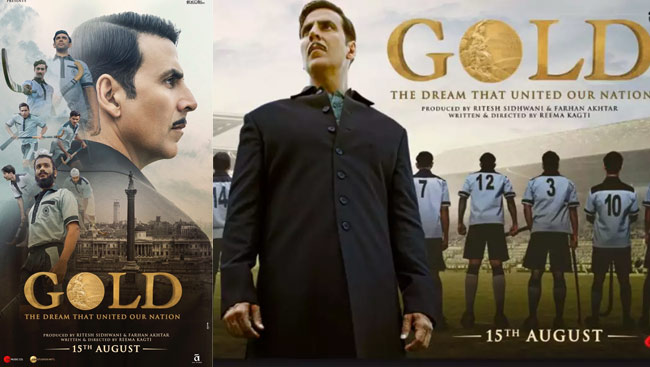 With the nation's freedom struggle in the backdrop and the pain of not hearing one's national anthem being played, it sows the seed to aspire for "Golda" for free India. How Tapan Das manages to put up a team and succeed in his endeavour, forms the crux of the tale.
This period drama, though well-captured, is over-fictionalised and peppered with internal politics, tension between players, a romance angle and unwarranted songs that makes the tale seem staid, run-of-the-mill, far-fetched and fictitious.
There are some beautiful game moments though, that spur you to cheer the Indian team. While the India-Pakistan relationship is beautifully handled, the playing of the national anthem at the end seems extremely forced. This makes the plot seem one-dimensionally patriotic.
With an inconsistent Bengali diction, Akshay Kumar is over-the-top as Tapan Das the down-and-out, eccentric team manager. Like his character, his performance too seems jaded. 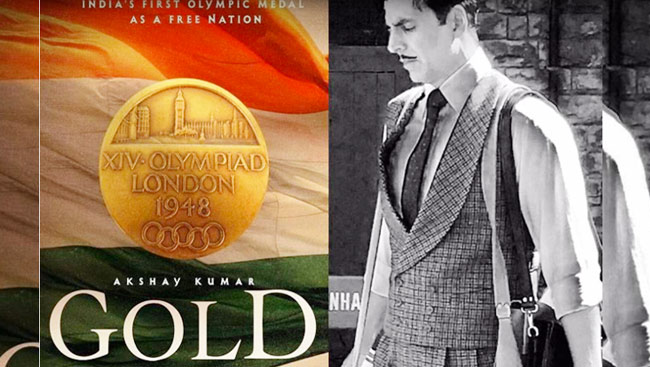 Mouni Roy as his wife Monobina Das is perfunctory in her disposition. There are a few shallow, unconvincing but obligatory scenes between the couple which clearly show that together they lack on-screen chemistry.
The others in the supporting cast are Kunal Kapoor as Samrat, the team Captain of pre-Independence India, Amit Sadh as Raghubir Pratap Singh, the Vice-Captain of the post-Independence team, Vineet Kumar Singh as Imtiaz Shah, the original Captain of the Indian team who migrates to Pakistan, Sunny Kaushal as Himmat Singh as one of the key players of the team. They all add a distinct flavour to their characters.
The background score by Sachin-Jigar is inspiring and hits the right notes. The tune of the title song - "Hum saab ko harke layenge, ghar layenge gold, gold," seems like a variant of Lagaan and other patriotic films.
Mounted with ace production values, Alvaro Gultierrez's cinematography is picture perfect as it captures the era and the performances to perfection. His frames are seamlessly merged with the stock shots by Editor Anand Subaya.
Overall, with an overload of patriotic films in the recent past, "Gold" fails to offer anything exciting.
Prev Next

"Satyameva Jayate" which means, "Truth always triumphs", is designed as an action thriller. It is a revenge story, where a son fights the system, and makes it his raison d'etre to restore his father's lost dignity.