Chilling out with Chillies

Arun Wali, 07 Jul, 2017 04:07 PM
Most Indians love their chillies. The credit for that stinging taste on the tongue and the fiery feeling in the mouth while eating a meal is thanks to the chilli powder used in preparing a dish. India is the world leader in chilli production with a market share of over half of the world’s chilli production. Indian chillies are famous for their colour and pungency levels. There are too many varieties of which only a few are mentioned here depending on their regional importance.
The Guntur Sannam, grown in Andhra Pradesh has a cult status as it accounts for 30% of the share of India’s total chilli exports to countries such as  Malaysia, Thailand, Sri Lanka, Japan, China, Germany and Canada. Even the vendor in the lanes of Guntur city selling mirchi bhaji (chilli dumplings) knows what he is offering to customers is world famous. Guntur’s cuisine is among the hottest in terms of its chilli content as it is capable of bringing tears to the diner’s eyes.
Kanthari chillies, grown in Kerala, turn white when mature. They lend a good flavour to dishes. Karnataka’s Byadagi chillies are similar to paprika. The chilli is long, has a thin skin and a crinkly appearance when dried. Less pungent varieties of this chilli are used for colour extraction as the red colour is popular among food and beverage processors. 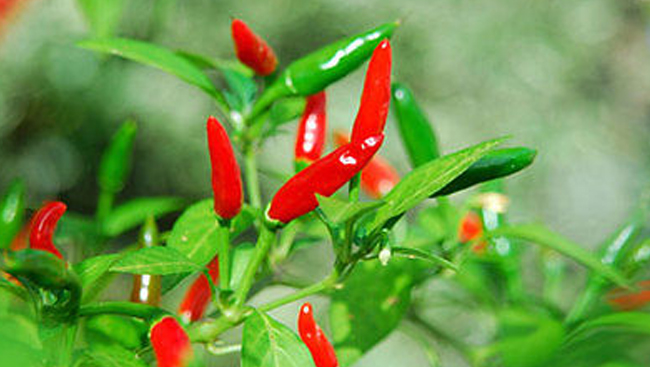 A meal in North-East India is considered incomplete if there’s no chilli chutney, preferably prepared with the indigenous variety of the Bhut Jolokia. Local people leaving the North-East for an extended time carry it in the form of pickle, paste or flakes, This famous chilli is called Umorok and Sap Malta in Manipur, Raja Mirchi in Nagaland and as Bhut Jolokia in Assam, the name by which it is globally known.
Restaurants in the North-East have two columns in their menu cards, one listing the ordinarily spiced dishes and the other reading “..with bhut jolokia” for diners possessing “six-packs” for this extra-spicy fare. The Guinness World Records in 2007 certified the Bhut Jolokia to be the hottest chili in the world. Powdered seeds of the Bhut Jolokia were considered by the Indian Army to make smoke grenades to disperse rioters. It is used in aerosol sprays with which women can ward off attackers.
Bird’s Eye chilli, also grown in the North-East, is tiny but packs a “sting like a bee” punch and can make Bravehearts cry. Hot sauces such as pepper sauce and Tabasco sauce are made with this chilli, besides being used in cooking and for making chutneys and pickles. 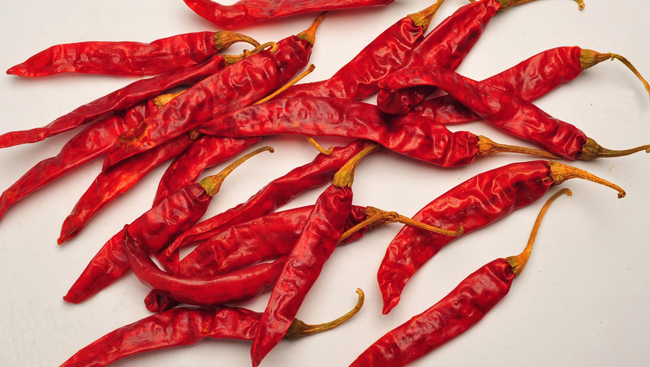 The dry chilli powder of the Kashmiri Mirch (chilli) is used for giving dishes a bright red colour and a mild spicy flavour. The powder provides colour to dishes in India and abroad. It measures barely 2,000 SHU on the Scoville Heat Units (SHU) which measures foods in terms of heat units measured per unit of dry mass. The bhut jolokia has an SHU of over 10,00,000 SHU.
The chilli is not indigenous to India. It was brought by the Portuguese to Goa, their colony in India, from South America in the 16th century. Within 100 years chillies were being used in all parts of the country. The sharpness in Indian food, before introduction of the chilli, was derived from black pepper. The Ain-i-Akbari, written in 1590, lists the use of black pepper along with other spices for the dishes cooked in the Mughal King Akbar's court.
The word chilli in most Indian languages is a variation of the name for black pepper. The chilli replaced black pepper in our cooking as the latter grows almost only in Kerala in South India while chillies can be cultivated anywhere in the country. The cuisine of Chettinad, a part of Tamil Nadu, is considered to be one of the spiciest cuisines of India as it makes generously mixes the red-hot chillies and the fiery milagu (black pepper) to provide the “heat” factor.
(Arun Wali is Senior Vice-president of AB Smart Concepts, a Hotel, Travel and Tourism consultancy company in New Delhi, India).
Prev Next

Attendees got a chance to taste a plethora of seafood options and also experience tours and seminars pertaining to the industry.

Giving Indian Cuisine its Due

The cuisine varieties of a pluralistic society are a reflection of the country’s 5,000-year-old history, agricultural assets, climatic differences and foreign influences.

Giving Indian Cuisine its Due

Pan-fry the marinated paneer slices on a grill pan or a non-stick pan till golden brown marks appear. Do not over cook and harden the paneer. Heat the sauce. Place most of the tomato sauce in an oven-proof flat dish or platter. Arrange steaks. Sprinkle the remaining sauce on the steaks. Sprinkle topping mixture.

Take your tastebuds abroad at Dine Out Vancouver

Take your tastebuds abroad at Dine Out Vancouver