Vic Sarin: A Life between the Lens, Frames and Stories

Art, cinema and ideas. We need these to keep the world hopeful, informed and curious. After all, these are what unite people across borders and various beliefs. And cinema, in particular, forms the basis of inclusivity of ideas and dialogue. Vic Sarin, a gem in this industry has contributed immensely to the glorious world of cinema with his expansive career spanning several decades. Each documentary, film, television series and production reflects a piece of his passion for exploring ideas and filming stories.
His celebrated works including Keepers of Magic, The Boy from Geita, and Hue: A Matter of Colour have received a wave of support and recognition from around the world. “The lens allows me to go into areas I cannot otherwise go and it’s the lens which allows me to go and experience something which I have never experienced before,” Sarin says while describing his journey and passion towards filmmaking.
Born in Kashmir, India, Sarin was always captivated by camera and pictures. “To me an image speaks [a] thousand words. One picture can change the whole world.” In our conversation, he recalls Bollywood classics such as Awaara and Mother India – movies which changed the way the world perceived Indian cinema, and also extended the stature of actors like Raj Kapoor and Nargis beyond Bollywood.

Cinema had left an imprint on Sarin quite early in his life. “I love the idea of how [the] magic of cinema affects people. We all know it’s artificial, we all know he’s (actor) not dying there and yet, we are moved by that,” he explains with amazement. “I did a film called Partition years ago and when you see a film like Partition [and] when Gian Singh (the protagonist) dies at the end, I remember how many people had handkerchiefs in their hands. They know that he’s an actor, he’s not dying. The power [of cinema] …that’s what I love. How you can get the magic capitulated [on] all these people, the manipulation the impetus… how strong it is.”
Professionally, Sarin began his career in Australia at the Australia Broadcasting Corporation making documentaries. Later, he moved to Canada where his career and work flourished further. In fact, it was here in Canada that Sarin’s work reached out extravagantly to the global audience through various film festivals and deservingly garnered him several recognitions including several Genie Award and Emmy Award nominations. 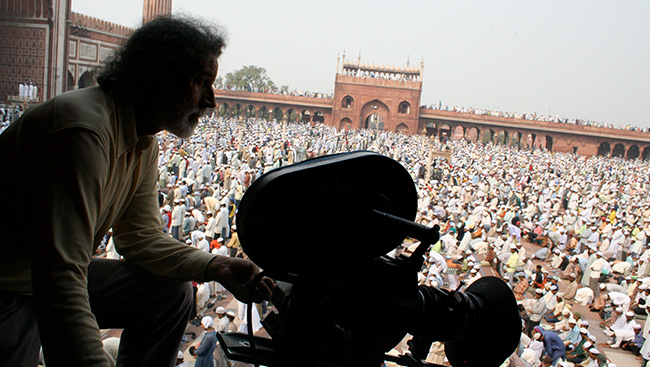 Amongst his prominent works, there are two that have personally impacted me – Hue: A Matter of Colour, and The Boy from Geita. Two very distinct and yet very strong subjects. Hue: A Matter of Colour is a documentary presenting personal journeys of people and their experiences being discriminated because of the colour of their skin by their own people. Based on the issue of colourism, the documentary traces stories in Asia, South America, the Caribbean, South Asia, and Africa.
The Boy from Geita, another one of Sarin’s compelling works, presents the life of a young Tanzanian boy who is persecuted because he is an albino. Albino killings are very much prevalent in some societies in Africa.
There are superstitious beliefs that the bones of an albino will make you wealthy and has magical powers. Across film festivals, the film received critical acclaim and stirred debate at various levels including Tanzanian authorities, who attempted to shut down the screening of the film at United Nations in New York City.
His latest documentary, Keepers of the Magic, is a project Sarin speaks passionately about. The film celebrates some of Hollywood’s legendary cinematographers, explores stunning moving images, and shares fantastic behind-the-scenes stories of some of Hollywood’s iconic works. In a way, it is a tribute to the excellent contribution made by the phenomenal cinematographers. The film is playing at film festivals across the world, keeping Sarin busy for the time being. However, this dedicated and passionate filmmaker says he has a few more projects lined up in the new future. We wish him the very best!
Prev Next

In a way, this deep sense of nostalgia was a motivating force behind Irani’s major characters and plots and Bombay was where the inspiration streamed in from.

Manny Dulay: Leading On and Off the Court

Manny Dulay has risen to the level of an elite student athlete while also being a positive influence for the community.

This 19-yearold gender equality activist is forging the path to a better future for girls and women here in Canada  and around the world.

Gill was named CEO in 2015 and brings over 20 years experience from the arts and communications s...

At the young age of only 16 years, this striker already has her eyes set on representing Canada one day.