The Toyota Corolla entered uncharted territory in 2018 by taking a page from the Prius’ playbook and going partially electrified for the first time. Now, the sedan gets a little more refined with enhancements to the infotainment and safety tech.

“Corolla drivers know where they’re going in life, and love the combination of driving fun and easy ownership that the world’s all-time most popular car delivers,” says Toyota Canada vice president Cyril Dimitris in a press release. “For 2021, we’ve enhanced every model with new features – making it a perfect time to enjoy the winning combination of the legendary Corolla and Toyota’s hybrid powertrain technology.” 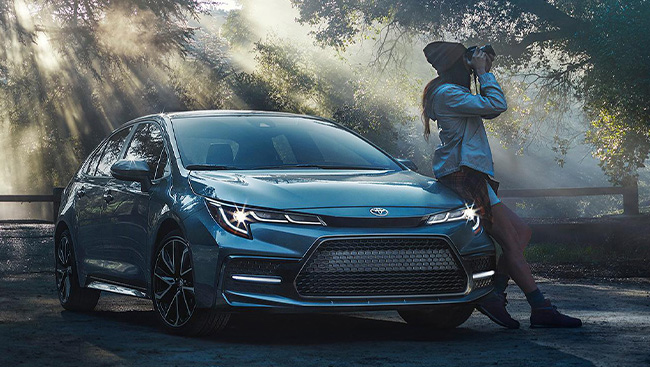 The refreshed four-door still retains its sleek looks courtesy of the 12th-generation platform offering standard sharp J-shaped bi-LED headlamps, a black mesh front grill and 15-inch aluminum wheels. It’s not quite as sporty as the hatchback, featuring bigger alloys and rear spoiler, which is unfortunately sold in internal combustion form only.
To be completely honest, I was surprised at how well equipped the interior of the Premium Package (+$2,000) grade we piloted was, packing vegan SofTex Leather seats, heated rear seats, ambient cabin lighting and a chunky leather steering wheel that feels great in hand.

I don’t love the easily-dirtied piano black trim, and would prefer a more intuitive infotainment system, though at least Toyota was kind enough to include a physical tuning knob. The latter gains Android Auto and Apple CarPlay compatibility allowing occupants to control their smartphone right from the Display Audio touchscreen. 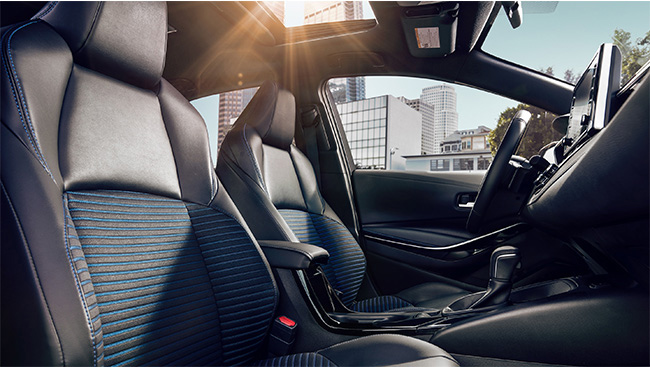 This Corolla’s powertrain is made up of a 1.8-litre four-cylinder internal combustion engine (ICE) complemented by two motor/generators, managed through an electronically-controlled continuously variable transmission. In total, the output is 121 horsepower and 105 lb-ft of torque.

No, fast is not a correct adjective to use here, however it’s fine for daily driving — the onboard nickel-metal hydride battery pack provides a small power boost to aid in acceleration — and a multi-link rear suspension setup affords above-average handling. A very limited pure EV mode can be toggled on via a switch on the centre console, battery charge level permitting, perhaps useful for cruising around the neighbourhood or circling for a spot in an underground parkade. 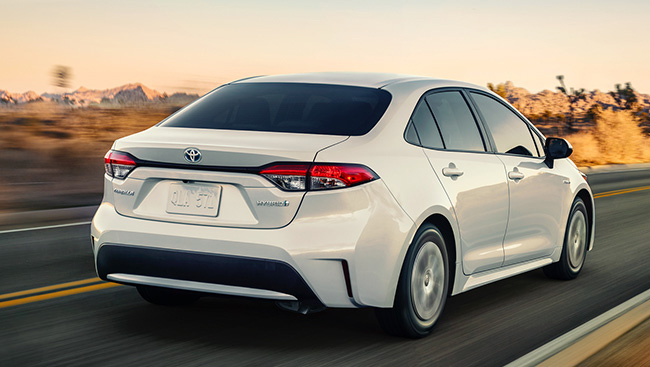 The real issue isn’t the performance, but rather how noisy the ICE is under load like when merging into traffic or climbing up a hill. While the car is premium feeling in a lot of areas, the lack of a quieter ride tarnishes the experience.

Fuel efficiency, as one would surmise, is quite good. Aside from the Hybrid Synergy Drive system the brand has been perfecting for quite some time, things like low-rolling resistance tires also contribute to the estimated 5.0 L/100 km combined city and highway fuel economy rating (I averaged a slightly higher number during real-world testing).
The 2021 Toyota Corolla Hybrid is built in Japan and starts at MSRP $24,990.