Save Our Doctors from Burnout

According to a ‘Physician Workload Survey’ conducted in 2018, 52 percent of physicians reported regularly feeling burnt out themselves, whereas 74 per cent of physicians reported frequently seeing symptoms of burnout in others. Reported burnout symptoms amongst physicians include irritability, apathy, chronic fatigue, and impaired memory. The rate of suicide among doctors is higher than that of any other profession. However, these statistics are most often overlooked, along with the mental health of medical professionals.

What causes physicians to feel stressed or burned out?

We all know how long it takes for a medical professional to finally receive that MD degree: four years of undergraduate school, another four years of medical school, and finally anywhere between two to seven years of residency.

Unfortunately, despite the years of effort and time dedicated to achieving this goal, many doctors aren’t rewarded with the type of career they desired. Extra workload, long work hours, societal expectations, and debt are a few of the reasons why many healthcare professionals face mental health problems. More than half of physicians have less free time outside of work than when they first began their careers, as per the Survey. “Taken all together,” says psychiatrist J. Bradley Hassell, MD, “The exceptional stress for a physician is comparable to being a PTSD victim, with trauma stacked on trauma.

It puts medical professionals at tremendous risk of suicide and burnout.” In the United States, between 300 to 400 physicians turn to suicide every year. 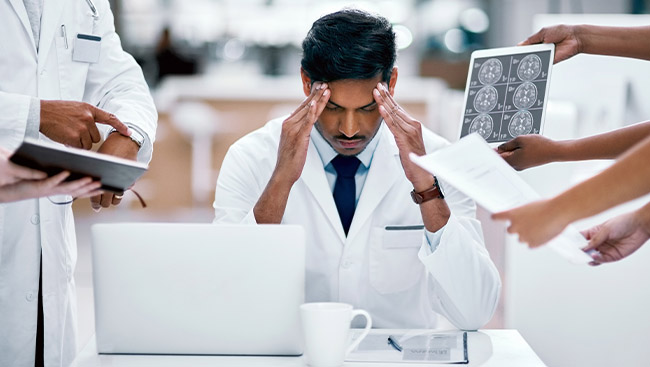 In light of these statistics, is the medical community really doing enough to help with physician mental health?

The stigma against physicians and mental health

During their residency, medical professionals tend to work between 80-100 hours per week, and then shift to 60-80 hours post-residency. With such busy work schedules, it’s rare for them to find time to focus on their mental health. In addition, the stigma against mental health, especially amongst healthcare professionals, forces many doctors to keep quiet about the issues they are facing.

More than half of physicians feel that mental health is a taboo topic to discuss, according to the Physician Workload Survey, and two-thirds would not even consider meeting a mental health professional at all.

A radiologist with clinical depression and inflammatory bowel disease offered the following insight: “I think physicians are held to standards which are not human, so we battle to be superhuman, to avoid litigation, keep employment, and pay off loans.”

Many physicians and professionals worry about losing their positions, prestige and practicing license if they decide to receive mental health treatment. Traditionally, physicians are expected to self-sacrifice rather than self-care, committing their lives to helping others; by admitting their mental illnesses, many physicians believe they are doing the wrong thing.

Dr. Hassell says, “the best motto for a physician – and anyone – who wants to improve their mental health is ‘an ounce of prevention is worth a pound of cure’.” The suicide rate amongst physicians would greatly decrease if doctors chose to seek help in the early stages of their illness, rather than waiting until the damages become irreversible.

Doctors from all around the world are using social media as a means to bring the matter into the public eye, and overcome the stigma surrounding it. Hashtags such as #doctorsmentalhealth have become prevalent in recent years. Another movement that has been gaining momentum is Crazysocks4docs, which was established by Dr. Geoff Toogood in response to the reactions he experienced after wearing odd colored socks to work one day. The talk behind his back was that he was ‘failing again’, whereas in reality, his new puppy happened to eat all of his socks (except for the two he was wearing that day). As a result, the first Friday of June every year is celebrated as Crazysocks4docs day amongst the medical professionals community, in order to address the stigma around mental health in doctors.

What can you do to help?

There are so many things that we as individuals, and as society, can do to help healthcare professionals with their mental health. The most important and foremost step would be to address the stigma that surrounds mental health amongst physicians. Regardless of the stigma, fear and perceived consequences, addressing mental health is the right and healthy thing to do. Encouraging physicians to speak with a mental health professional about burnout, stress, depression, and suicidal thoughts can save many lives. Simple acts can make a big difference. For example, if you have a doctor in your family, start up a conversation with them about their mental health.

When addressing such a sensitive topic, it’s important to show care, empathy, and make the person you are talking to feel appreciated.

Education is another essential component of reducing the stigma around the mental health of medical physicians. We, as a society, should acknowledge and care for the health of those who devote hours to our well-being. Educating ourselves, and those around us on the topic can make a big difference. So, let’s start right away by accessing the multitude of resources available on the Internet and social media, and using hashtags such as #doctorsmentalhealth to show that we do indeed care.

Additionally, reports suggest that Covid-19 vaccines are not only safe for people with heart diseases, but they are also very important. We are at a point where there is a growing risk of emerging variants, there heart patient being one of the most vulnerable populations in the society need to get their vaccine shots as soon as possible.

Support your happiness with positive psychology

To achieve a well-balanced and a meaningful life one needs to have a positive psyche and do away with all the negativity within. It is a known fact that humans respond well to positive emotions and stay motivated under its influence.

Support your happiness with positive psychology

Overcome your dental anxiety and fears

The more you procrastinate, the higher your risk of developing dental problems. Visiting your dentist regularly can actually make the entire process easier on many levels. Richa Vats, a doctor and Geriatric Dentist shares how to deal with dental anxiety and overcome any fears.

Overcome your dental anxiety and fears

When does a heat wave become a health hazard?

Soaring temperatures eased Wednesday in parts of British Columbia, Yukon and Northwest Territories, but were expected to remain in high in eastern British Columbia and the Prairies for several days.

When does a heat wave become a health hazard?

Pfizer recommends a 21-day interval between shots of its two-dose vaccine, and like several provinces, British Columbia does not offer medical exemptions for higher risk cancer patients like Martinson.