The farmers protests continues to see an impasse between their demands and the government. The government on Monday extended temporary suspension of internet services at three Delhi borders (Singhu, Ghazipur and Tikri) till Tuesday, 11 pm.

Over 15,000 attend ‘mahapanchayat’ in UP’s Bijnor, farmer leaders from Karnataka & Maharashtra also join them After Muzaffarnagar, Mathura and Baghpat, another kisan sit together was organized in Bijnor on Monday. Attended by over 15,000 farmers from western Uttar Pradesh, the gathering was also addressed by farm leaders from Karnataka and Maharashtra who emphasized that the protests were not confined to North India.

The Haryana government on Monday evening resumed mobile internet services, which had remained suspended due to the ongoing farmers’ protests, in seven more districts. The districts are: Ambala, Kurukshetra, Karnal, Hisar, Sirsa, Bhiwani and Fatehabad. The services will, however, continue to be banned in seven other districts — Jhajjar, Sonipat, Kaithal, Rohtak, Panipat, Jind and Charkhi Dadri.

In an order released in the evening, the state home department said the ban is continuing in the seven districts in view of law and order issues. Acoording to officials, Delhi Police arrests a protester who allegedly attacked and injured a CISF personnel during violence at Red Fort on Republic Day. According to Delhi police so far 44 FIRs have been registered and 128 people arrested so far in connection with 26th January violence.

Balbir Singh Rajewal of the Bhartiya Kisan Union says there will be a country-wide shake up on February 6th where roads will be blocked between noon and 3 pm.

Indian Prime Minister Narendra Modi is not backing down and is keen on pushing the agriculture bills. On Sunday he criticised last week's deadly riot in the capital. Thousands of farmers on foot and in tractors showed up in New Delhi on Tuesday, driving tractors into the public and ramming police personnel and leaving one person dead and hundreds of police officers injured.

The Budget focuses on increasing farmers' income, several measures have been taken in this direction. Farmers will be able to get loans easily. Provisions have been made to strengthen APMC markets with the help of Agriculture Infrastructure Fund: PM Narendra Modi pic.twitter.com/oo6ffc7eqZ

A tweet from an officer deployed at the protest reads: I was on duty at Red Fort yesterday when a huge crowd of farmers reached there with swords, stones, lathis & spears. As the crowd moved in our direction, a grill fell on my leg & another on my colleague's ribs. We couldn't move. It was a scary moment: Constable Ritu, Delhi Police.

Prime Minister Modi called the farmers' assault on the historic Red Fort an "insult" to the national flag.

Police arrested at least one journalist and filed complaints against others, stirring over the reporting of the protests. Mandeep Punia, is a writer for the Caravan magazine, was detained on Saturday at Singhu, one of the main protest sites. He was photographed being taken to court on Sunday, where he is expected to be charged on unknown offences, local media reported. Since Tuesday, at least five complaints have been registered against Indian journalists and an opposition Congress member of parliament on several allegations, including sedition and criminal conspiracy.

After students, Muslims, farmers and doctors, now journalists have had to take to the streets to protest.

Global media watchdog the Committee to Protect Journalists called for Punia and another journalist who was reportedly also captured to be released immediately.

“We are extremely alarmed by the authorities’ treatment of journalists and news organizations reporting on the farmers’ protests in India, which is an issue of national importance.” - @aliyazeba https://t.co/bJb7AFMgOh 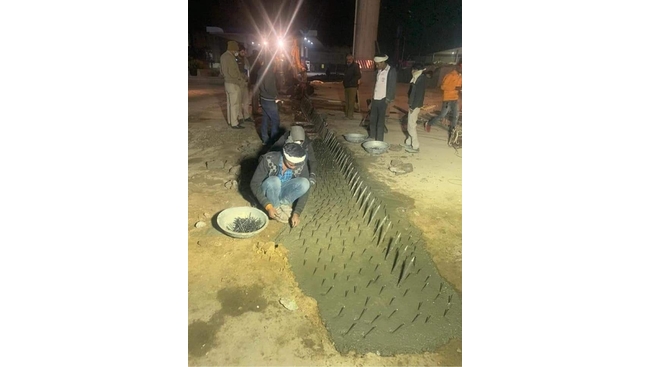 Farmers have long been seen as the heart and soul of India, and agriculture supports more than half of the country’s 1.4 billion people.

Meanwhile, the Farmers are sitting firm in the ongoing conflict with the Modi government. Bharat Kisan Union spokesperson Rakesh Tikait announcing that he is ready to die. He also claimed that the electricity and water supply have been cut at the site.

He has been bestowed with the Padma Vibhushan award posthumously and is recognized as the “Father of Fiber Optics” on a global scale.

On foot and in tractors, the protesters were part of a huge rally planned for India's Republic Day. Many protesters diverted from agreed routes and clashes broke out with police.

Tens of thousands of farmers have been protesting key highways connecting New Delhi with the country’s north for almost two months demanding a complete withdrawal of agriculture laws.