Chandigarh, June 3 (IANS) Shiromani Akali Dal (SAD) president Sukhbir Badal on Thursday demanded a high court monitored probe into the manner in which the Congress government in Punjab was playing with the people's lives by creating an artificial shortage of vaccines by selling vaccine doses at a hefty profit to private hospitals.

The SAD president told the media here that a case should be registered against Health Minister Balbir Singh Sidhu for diverting vaccines meant for the common man to private institutions even as he averred that the issue had the makings of a major scam.

He said the scandal had also exposed Congress leader Rahul Gandhi who had recently demanded free vaccines for all.

"Rahul Gandhi should say if he supports the Punjab government's move to force the common man to pay Rs 1,560 per dose."

Demanding that the Congress government stop this discrimination immediately, he said if this corporatization of vaccine distribution is not stopped the SAD would be forced to approach the courts for justice. 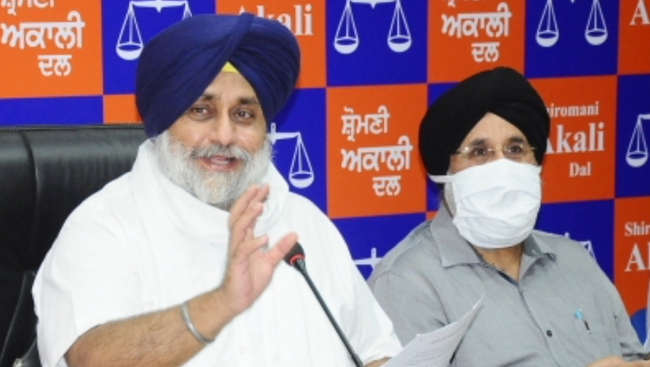 He also announced that once a SAD-led government was formed it would probe the entire issue and ensure exemplary punishment to those who had endangered the well being of the poor and underprivileged.

Badal said a Covaxin dose costing the state Rs 400 was being sold to private institutions at Rs 1,060. The private hospitals were further selling the dose at Rs 1,560.

He said in Mohali alone 35,000 doses were sold to private institutions to earn a profit of nearly Rs 2 crore in a single day.

Stating that it was immoral for the Congress government to make a profit from the sale of vaccines, the SAD president said the government was also punishing the people by forcing them to cough up Rs 1,560 per dose during a time of economic slowdown.

The electronic conversation took place as US President Joe Biden announced on Thursday that India will receive Covid vaccines directly from the US stockpile, the White House said.

The Chief of Army Staff (COAS), General M.M. Naravane, reached Kashmir on Wednesday on a two-day visit to review the prevailing security situation in the Union Territory (UT), the army said in a statement.

"There have been several unfounded media reports that have peddled misinformation among the masses regarding this exercise of national importance," a ministry statement said, adding that the total number of Covid vaccine doses administered in the country so far stand at 21,85,46,667.

Cong concerned about India's stand on Israel-Palestine conflict in UN

The Congress said that it was "appropriate for our initial statement to note that the intrusion by Israeli forces into the Holy Al Aqsa mosque during Ramzan prayers had ruptured the delicate peace in the region".

Cong concerned about India's stand on Israel-Palestine conflict in UN

The Delhi High Court on Tuesday suggested the young patients should be prioritised in the distribution of Liposomal Amphotericin B drug, used for treating black fungus, "as they hold promise of future over the older ones who have lived their lives".

Heart-breaking stories have now become common in India, as the second wave of coronavirus is wreaking havoc.