Has the real message of Vaisakhi been lost?

For many centuries, April has been the month when farmers in Punjab harvest their wheat crop and celebrate their earnings. The excitement of the hustle and bustle of transporting and selling the crop runs high. Without a good harvest, communities would perish, as wheat is one of the main sources of food and income in Punjab. The spring harvest has always been an important and decisive time in the region. So there was always great joy when a good harvest resulted at Vaisakhi time.

Since 1699, Sikhs have had a further reason to celebrate on this day. On April 14, 1699, the tenth Sikh Guru, Guru Gobind Singh ji, initiated the Khalsa Panth. The day signifies the transformation of ordinary individuals into a disciplined and responsible army of pure and fearless people, ready to protect the helpless and defenseless.

For centuries, the citizens of India had been living under constant fear and oppression of invaders and tyrant rulers. They had been continuously exploited and forced to adopt the religion of the people in power. During the Vaisakhi of 1699, Guru Gobind Singh ji, gave people the option to create their own destinies by standing up against the rulers of the day. Guru Gobind Singh ji institutionalized the sixth Guru, Guru Hargobind Singh ji’s, concept of Sant-Sipai, or Saint-Soldiers.

Guru Gobind Singh ji invited everyone to Anandpur Sahib on Vaisakhi in 1699. Eighty thousand people had gathered from all over the country. Standing with a sword in his hand, he asked for a head from the crowd for an unstated cause. One by one, five individuals came forward. These men came from different castes and different regions of India, a Khatri from Punjab, a Jat from Delhi, and three other low-caste Hindus respectively from Gujarat, Odisha and Karnataka. Then, through a unique ceremony of “Amrit Sanchar” Guru ji transformed them into the Panj Pyare, the ‘Five Cherished Ones’. Once complete, Guru Gobind Singh ji bent down on his knees and took amrit himself from the Panj Pyare. He set an example of equality and fraternity by transforming himself into a disciple as well (Guru-Chela). This event led to the emergence of the Khalsa Panth.

Guru Gobind Singh ji turned “sparrows into hawks” and taught them to fight against unjust and help the helpless and defenseless. On this auspicious day, Guru Gobind Singh ji assigned the 5 kakar, the identity of every Sikh, and a specific code of conduct (Rehat Maryada), creating the Khalsa Panth. That is why, Vaisakhi is known as ‘Saajna Divas’ or the ‘Day of Creation’. 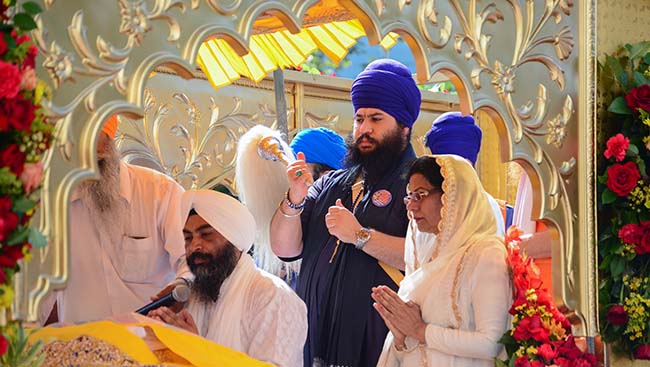 The religious significance mixed with the cultural festival of Punjab makes Vaisakhi an exciting and festive time. However, as time goes by, we are gradually losing sight of the fundamental importance and significance of this day. We keep forgetting the guidelines established by Guru Gobind Singh ji. The celebrations are getting more and more elaborate and Vaisakhi is turning into an event of hollow festivities, without any attention to what it truly stands for.

Dr. Jaswant Singh Sachdeva mentions in his article, ‘Celebrate but also Resolve to Follow its Intent’, “Certainly, in saying so, I do not intend to imply that one should not celebrate this festive occasion in great jovial spirit that it is worthy of. On the contrary, I would categorically state that this being the ‘Day of Creation of Khalsa’, the celebrations should encompass all the happiness and excitement that they can muster. But unfortunately, what is missing in all these celebrations is the lack of motivation to understand and then act on the message that was imparted to the Sikhs on this particular day.”

Vaisakhi is a day of reflection for all of us. It should be the day we renew our vows to uphold the golden principles of Sikhi, educate ourselves on the original significance of this day, make new resolutions, and reintroduce the Sikh-Rehat into our lives rather than running away from it. The need for Guru ji’s Sikhs is still there today. Vaisakhi should be the day when Sikhs intoxicate themselves with amrit and follow the path our Gurus have shown us. Only then will the festival of Vaisakhi have a real meaning for us.

EcoSikhs: Care for Nature, Care for All

After EcoSikh's tremendous work, World Sikh Environment Day is now celebrated in eight countries, with the involvement of several Gurdwaras and families participating. Sikh Environment Day aims to sensitize society/students of all ages, social, religious, and academic institutions and organizations.

EcoSikhs: Care for Nature, Care for All

7 Ways to make your Vaisakhi filled with colour and joy!

7 Ways to make your Vaisakhi filled with colour and joy!

Canadians will see more than 1.3 million new immigrants over the next three years. In 2021 alone, Canada welcomed more than 405,000 new permanent residents, which translates to be the most immigrants welcomed in a single year in the country’s history.

Pistachios, known for their cracking goodness, are also known as the green nut, the smiling nut, and the royal nut in different parts of the world. This underrated yet utterly wholesome nut is known for its unique health benefits and was preferred by legends and aristocrats throughout history. Here are some nutty good facts about California pistachios.

Our homes were naturally not kitted out to double up as offices. While some of us have been able to invest in ergonomic office furniture, many of us have simply lacked the space to create a home office set-up. As a result, we worked sitting on floors, from our couches or even sprawled out on our beds.

Over time, usage and demand for glass are increasing in the kitchen as health and overall wellbeing takes centre stage. We list five compelling reasons why glass works extremely well in the kitchen and outdoors.