EcoSikh is all about bringing the community together to fight climate change!

Global climate change is not just a buzzword. The potential future effects of global climate change are dangerous and can include several harsh conditions like frequent wildfires, drought in some regions, and an increase in the number, duration, and intensity of tropical storms. The entire world, including politicians, corporate, Governments, and NGOs are working together to draw stringent policies. In fact, media houses and citizens are constantly following news about the ongoing UN climate change conference also known as COP26. COP stands for Conference of the Parties, and the summit will be attended by the countries that signed the United Nations Framework Convention on Climate Change (UNFCCC) – a treaty that came into force in 1994.

One such community that is coming together to combat climate change is EcoSikh. Who are they and what do they do? EcoSikh was started in 2009 at Windsor Castle, UK, as a response from the Sikh community to the threats of climate change and the deterioration of the natural environment. The organization arose as part of the Long Term Plans for Generational Change program initiated in 2009 by the United Nations Development Programme (UNDP) and the Alliance of Religions and Conservation, UK (ARC) to help the world’s major religious traditions create long-term plan to improve their relationship with the environment and to guide their investment towards environmental protection.

EcoSikh connects Sikh values, beliefs, and institutions to the most important environmental issues facing our world. They draw on the rich tradition of the Sikh Gurus and the Sikh history to shape the behavior and outlook of Sikhs and the world, ensuring that our deep reverence for all creation remains a central part of the Sikh way of life. The man who started it all is Dr. Rajwant Singh who is the founder and president of EcoSikh. He is also the Chairman of the Sikh Council on Religion and Education (SCORE), Communications Director of the Sikh Human Development Foundation, and Secretary of the Guru Gobind Singh Foundation in Maryland. In the past, Dr. Singh has also held the presidency of the Interfaith Conference of Metropolitan Washington, where he convened faith communities in DC for joint discussions. Dr. Singh currently resides in the Washington, DC Metro Area with his wife and two children. 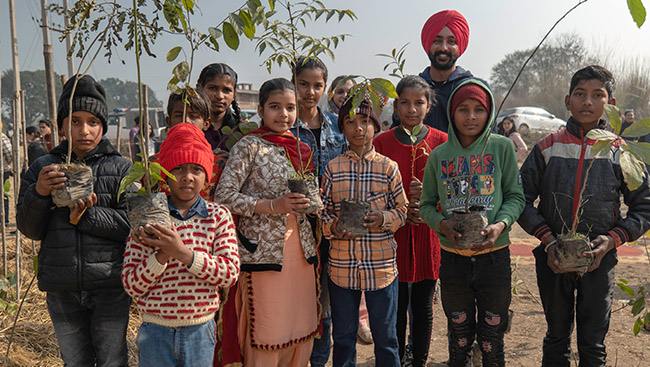 After EcoSikh's tremendous work, World Sikh Environment Day is now celebrated in eight countries, with the involvement of several Gurdwaras and families participating. The mastermind behind this project is Dr. Singh who thought March 14 was the perfect day to celebrate nature in the memory of Guru Har Rai. This event is celebrated worldwide in the gurdwaras and institutions with meaningful actions to protect and celebrate nature. Dr. Singh also announced one million trees to be planted as part of the 550th birthday celebrations of Guru Nanak Dev Ji and launched the Guru Nanak Sacred Forest project in 2019. Sikh Environment Day aims to sensitize society/students of all ages, social, religious, and academic institutions and organizations. 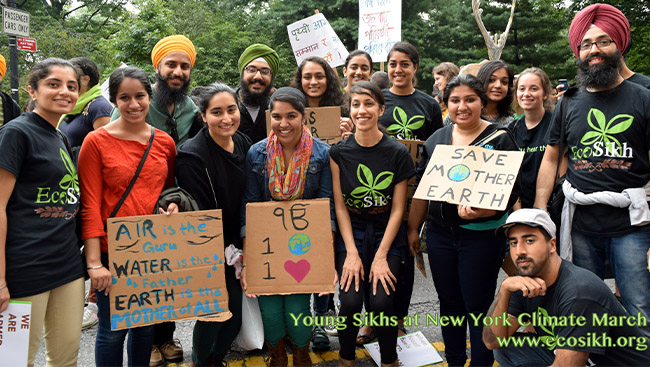 One of the biggest projects for EcoSikh is Guru Nanak Sacred Forests. The idea behind this project is the reforestation and conservation of biological diversity by planting micro forests (aka Guru Nanak Sacred Forests) in Punjab and other states and reviving native forest species of the region. This project was first kick started in March 2019 and as of today, EcoSikh has spearheaded 356 projects in several parts of Indian including Punjab, Haryana, Rajasthan, Gujarat, Maharashtra, New Delhi, Jammu and Kashmir, Chandigarh, and even one in Kasur, Pakistan. Overall, EcoSikh has planted 1, 95,720 trees under its Guru Nanak Sacred Forest project.

Other than tree plantation, the other thing EcoSikh is doing is that more than 100 native, rare and endangered, wild forest species have been conserved as live seed banks in these forests made with the Miyawaki Methodology (which means planting two to four trees per square meter.) The list of species is well researched through forest surveys; verified and validated by renowned experts, and by referring to various research papers. These forests are made with 100% organic material and have more than a 95% survival rate. They attract many native species of birds, insects, and small creatures who feel secure enough to make them their habitat.

The third big project under EcoSikh is the Guru Granth Sahib Bagh which is situated at Patto Hira Singh Moga and inaugurated in August of 2018. Ravneet Singh who is also the project manager of EcoSikh spearheaded the establishment of the first-ever five acres Gurbani-based garden, Guru Granth Sahib Bagh which exhibits all the plants referred in Sri Guru Granth Sahib. This particular spot also serves as a space for live workshops, is an exclusive educating centre for children, youngsters, and the elders to bridge the gap between Sikhism and Nature. The idea is to get people of all faiths and religions, environmentalists and nature lovers, scholars and professionals, devotees, and all those who seek personal and spiritual benefit to come here.

Giving us tips about reforestation, Dr. Rajwant Singh says, "Plant a sacred forest! It is doable and nothing is simple than that. The current situation doesn’t allow us to plant trees. The call is ‘Plant a forest’. If you don’t have space, just donate for 550-trees and EcoSikh will plant your forest in Punjab. There is a massive ecological crisis looming over the Earth and humanity. If we. the people will not take action today, we may not have any other chance to avert the disaster that is coming upon us. “If we love Guru Nanak, then we must serve the entire planet and entire humanity. We just need to remind ourselves, “If one nation sinks, we all sink.” I appeal and invite all the Sikh businesses and institutions to collaborate with EcoSikh and establish 1500 sacred forests and achieve 1 million-tree target."

EcoSikh is going to be part of COP 26 and EcoSikh is aiming to collaborate with all the faith communities to take action on their own and not wait for the Governments to save their planet. EcoSikh will open its knowledge sharing and forest training for all and plant sacred forests for all walks of life. EcoSikh will also explore the possibilities to collaborate with international investors and funding agencies to increase our forest making capacity by 10 times.

If you want to donate for Guru Granth Sahib Bagh or plant a sacred forest in Punjab, email info@ecosikh.org

5 Acts of kindness to adopt when dating online

According to a recent survey by Bumble in India, emotional connection (60 per cent) and kindness (55 per cent) top the charts, followed by empathy (32 per cent), as priorities when it comes to dating someone or choosing a potential partner, post the second wave of the pandemic.

5 Acts of kindness to adopt when dating online

Six South Asian Brands You Can Support While Choosing A Diwali Gift!

While you are looking for gifts, why don't you take it a notch higher and support South Asian brands in North America? Here is a list of brands you can check for some amazing gifting options.

Six South Asian Brands You Can Support While Choosing A Diwali Gift!

Diwali Decor on a Budget

Let us guide you through with a few practical suggestions that will not only help brighten up your space but will also keep your festive spirits high, without breaking the bank, of course!

Diwali Decor on a Budget

The real essence of Diwali gleams through the joy of sharing, spreading the light of happiness, and brightening up the lives of others. So, this year why not make the festivities a bit more meaningful and celebrate a more mindful Diwali? Here are some unique ways to celebrate Diwali and brighten up not just your festive mood but also spread the light of happiness onto others…

We all have some weaknesses and undesirable traits within us — fear, procrastination, low self-esteem, material desires, greed, jealously, or obsession and on the occasion of Diwali, one must reflect upon all these traits that hinder our growth and see how we can improve as individuals.

It showcases 23,000-square feet of indoor and outdoor amenities on the sixth floor for the residents. This upcoming High-rise building is all about luxury and will give Surrey's Whalley district a facelift. The Grand is going to be an iconic structure which is truly unique to the City of Surrey.