Vancouver Police are investigating two mischiefs to the exterior of the Chinese consulate and are asking for the public’s help to identify the suspects.

“These are such disrespectful and intolerable acts,” says Constable Tania Visintin, VPD.

On March 22, a man parked his dark-coloured Ford Escape in front the Chinese consulate near Granville Street and West 16th Avenue.

He approached the front gate and spat on the plaque dedicated to the Chinese Consular General. He then threw an unknown white substance from a take-out cup on the same plaque. The suspect then used a hammer to hit and attempt to pry the plaque off the wall. 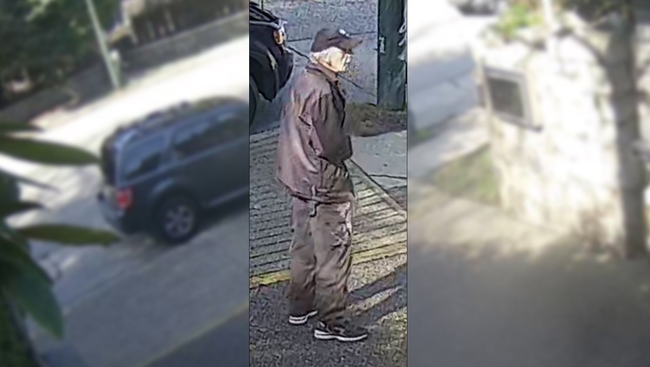 An employee of the consulate tried to leave the building in a vehicle, but the suspect blocked them and spat on the vehicle while verbally berating the driver. The suspect left the area north on Granville Street in the Ford Escape.

The suspect appears to be in his 70s and has a thin build. He has white hair. He was wearing a dark jacket, dark pants, dark shoes and a dark baseball cap.

In another incident, on April 4, a man walked up to the front gate of the consulate and spray painted graffiti on the gate and wall of the building at around 3 a.m. He was seen on surveillance footage walking away north on Granville Street.

The suspect in this case appears to be white with a heavy build and approximately 30 to 40 years old. He was wearing dark pants, a grey hooded sweater with a black “Batman” logo on the chest and dark shoes.

“Investigators do not believe the same man is responsible for both crimes,” adds Constable Visintin.

Unifor president Jerry Dias says an independent commission could be comprised of key stakeholders to research the effects of minimum-wage policy in Canada and tone down the politics involved.

A spokeswoman for Health Canada says the ban on direct flights from India and Pakistan has also affected passengers trying to return to Canada from those countries on connecting flights through airports in Europe or the United States.

2 people have been shot and 1 person is dead. The victim is a young man linked to the Brothers Keepers. Passenger side of the BMW ridden with 13 bullet holes.

Mike Farnworth met with police representatives Thursday following a recent spate of shootings that have left gang members dead or injured on streets, in mall parking lots and at Vancouver's airport.

Sgt. Judy Bird of the Abbotsford Police Department says the 55-year-old was a resident of the Fraser Valley community.