“Quality healthcare delivery in affordable pricing was an inevitable need, particularly for the expat communities in Saudi Arabia two decades back. This thought spurred my interest in health sector then.”

Alungal Mohammed is a popular name in the Middle East. The Kerala-born businessman holds the positions of president, chairman and managing director of Al Abeer Group, a healthcare organization owning and operating high-end medical centers and hospitals across major cities in Saudi Arabia and surrounding nations.
Alungal was just another expatriate until he decided to make a difference utilizing his business acumen coupled with his overwhelming compassion for his fellow beings. Talking about what encouraged him to launch Al Abeer Group, he says, “Quality healthcare delivery in affordable pricing was an inevitable need, particularly for the expat communities in Saudi Arabia two decades back. This thought spurred my interest in health sector then.”
This pioneering vision of serving quality medical care in the most affordable expense triggered the opening up of a polyclinic in Jeddah in 1999. From there began the rapid expansion of Al Abeer Group with 15 facilities in Saudi Arabia itself and also transcending borders to Oman, Qatar, UAE, Kuwait and India. “The group has also undergone diversification to non-healthcare verticals like aviation, visual media, advertisement and marketing, and information technology,” adds the president.
Coming back to his hometown, the group’s project, Al Abeer Educity, at Malappuram district in Kerala comprises of a cluster of institutions in both medical and non-medical streams on a single campus. A multispecialty hospital cum proposed medical college on this campus will be dedicated to the public this year. “The towering growth and abundant scope of medical tourism in Kerala is also part of the key objectives of this hospital project,” says Alungal sharing the vision of the project.
Other prospective ventures like an international school, technical academy, ayurvedic spa, shopping mall, luxury hotel, residential villas, and metro library will be established there as well. “To enable the student community for accomplishing academic fullness is the principal objective of Abeer Educity project,” shares Alungal, adding that this project expects to offer direct and indirect employment to almost 5,000 and 10,000 people.

The successful businessman has been honoured with many awards, two of them being Business Entrepreneur Award (2012), and KMCC Award for the Best Health Care services in KSA (2010). Yet, he does not solely take credit for these achievements. “It is the dynamic and devoted team of Abeer that has brought this success,” he humbly states. Before concluding, I ask him what is his biggest achievement so far, and he asserts, “It is nothing but the trust and preference of scores of care-seekers and employees we have won to date.” 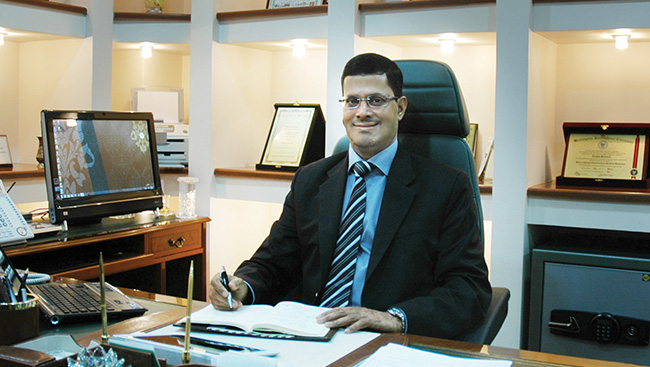 What is your advice to future immigrants?
Most of the immigrants settle in the GCC countries to earn a better living. I wish to say that these countries are really gifted lands; treasure houses of opportunities. Those who work hard with a dedicated mindset and definitive vision to win the bread will be rewarded. These nations are the most stable and secure part of the world. So, explore the possibilities.
What advice would you give to those who wish to follow your path?
Think and act out-of-the-box. Be ready to take meaningful risks. Have an indomitable vision and a never-say-die attitude. Commitment, loyalty and dedication bring success. Be persistent, trustworthy and humble. Live a value-based life. At first, make yourself a good man before you become a businessman. The quality of your service is ultimately an expression of the quality of your own self.
How do you see the growth of the healthcare sector worldwide?
Healthcare industry all over the world is booming as never seen before. But what accounts for this is the rampant unhealthy lifestyle. In my perspective, mushrooming of healthcare facilities indicates an inauspicious condition. The actual growth of healthcare industry must never be understood in terms of multiplying healthcare institutions. It has to be rather on the basis of increasing awareness on the ways to enhance healthy lifestyle practices and thus to check ill-health to the best possible level.
It is high time we reinvigorated our fight against lifestyle disorders which affect human health badly. The large-scale campaigns Abeer sets out this year on Antismoking and Diabetes Control are with this view in mind.
On the other hand, technological innovations and digitalization in global healthcare sector are bringing about fruitful and far-reaching impressions everywhere. Diagnostics and treatment modalities are being simplified at the patient’s ease and comfort. Many such developments like patient-friendly apps are good enough to cater to the healthcare needs of modern world. Technological sophistications in healthcare based on the application of artificial intelligence, virtual reality have triggered a paradigm shift in the industry.
Prev Next

Gulzar Transport specializes in hauling containers, b-train loads, reefers, step decks, tractors, and dry vans all over Canada and in the US.

For more than 35 years, ASFS has represented injured people in claims against insurance companies and government agencies that want to settle for the least amount of money possible.

Described as a soft-spoken yet forthright, tenacious and altruistic entrepreneur who will conduct all business transactions with the utmost integrity, the CEO and founder of THIND Properties is widely respected in development circles. To date, his company has built more than a thousand homes throughout Metro Vancouver and a thousand more are already planned for development in the next few years.

Dr. Greg Thomas is the President and CEO of G3 Consulting Ltd. (G3), an environmental engineering firm based in Surrey BC. G3 conducts environmental effects and human health studies on domestic and international projects.

The techie yearned for freedom to implement his own technical strategies while experimenting with business models and new ideas, thus conceptualizing QuestionPro.