The old adage laughter is a universal language certainly bodes well for hilarious Punjabi comedian Sugar Sammy. Born Samir Khullar, Sugar make us laugh with his hilarious and provocative take on multicultural issues such as arranged marriages. Sugar hit the stage at the age of 19 while he was working as a night club promoter. Since then, Sugar Sammy has toured the world, put out a CD entitled Down with the Brown. Sammy focused on marketing and cultural studies at McGill, and while many standup comics are barely fluent in one language, the Montreal native not only speaks but performs in four: English, French, Hindi, and Punjabi.

Sammy is one of the hottest, emerging young comedians internationally and has enjoyed considerable success around the world. He has set attendance records and received rave reviews in comedy clubs, colleges and theatres across North America, Europe, South Africa, Australia, and Asia. Critics are unanimous in their praise of hilarious material and his concise delivery.

Always known as the class clown, but never had an official gig until some friends organized a fundraiser and asked him to be the night’s entertainment. “I always wanted to do stand-up, but I never had the guts to do it since then. As soon as I did that fundraiser, it never stopped,” says Sammy. “One of my student councillors knew a local club owner and made a phone call. You always get thrown into these things by accident and then you just run with it.”

As a young child, Sammy says he remembers the exact moment when he knew he wanted to be a comedian; watching Eddie Murphy’s 1983 stand up special “Delirious” when he was eight years old. “When I saw it, that’s what I knew I wanted to be, that’s who I wanted to be like. I am very influenced by African-American comedians. Dave Chappelle, Chris Rock, Martin Lawrence,” says Sammy.

Sugar Sammy is always on the fringe of what is politically correct and aspires to stir up and sample present day multiculturalism. In doing so, he presents uproarious scenarios and comments on our global society’s inherent contradictions hilariously funny ways, ranging from arranged marriages in his Indian ancestry, to his views on drugs and modern day relationships. Sugar Sammy will have you laughing, thinking, and seeing life in a completely new way.

A few more questions with Samir Khullar a.k.a Sugar Sammy 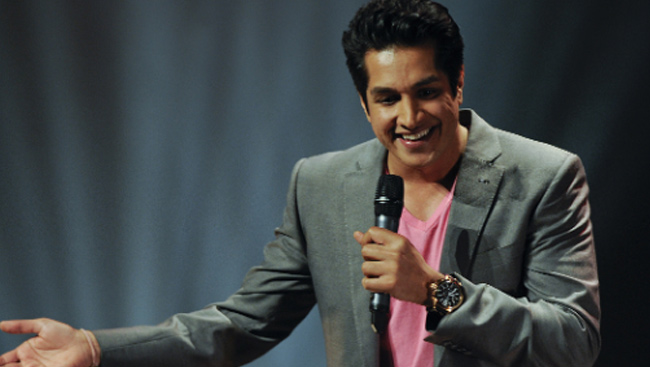 Do you view yourself as a role model for South Asian youth? Why or why not?

I have never really thought about it to be honest. I live my life the best way I know how. So should everyone else.

Being a comedian is a very non-traditional role for South Asians. What, if any hurdles have you faced in your career?

I think being noticed in the beginning was difficult just because the entertainment industry is very cut throat. I just kept at it and eventually my career skyrocketed.

What advice would you give young, aspiring comedian?

Save your money. It is a tough ride. However, it is worth it when you get here. There is no secret. It is like: There’s no shortcut; that’s the secret — no shortcuts. You’ve got to work hard at this and you’ve got to work smart. You’ve got to improve every single time you’re up on stage; you’ve got to get better every year; you’ve got to become the best in your industry. That’s my goal: To become the best in the industry. If you aim for that, even if you don’t reach it, you keep getting better; no matter what, you’re going to get better and you’re going to be better than a lot of the guys out there… You have to suffer through it and that suffering actually makes you a better entertainer and a better comedian and a better person.

Where do you see yourself in 10 years? What would you do after comedy?

Now that my comedy career has taken off, the next step is definitely movies, TV and producing. I see myself being in a position where I can create and produce my own work as I please. Definitely. Definitely looking to make the jump to film and TV. The offers have finally started coming in via my management and stuff like that. It feels like it is starting to go that way now. I am looking forward to doing that and working in that medium as well.

YES! I love Bollywood but not all of it. I love Karan Johar’s work and would work with him in a heartbeat. My dream would be in a Karan Johar film with Amitabh Bachan and Rani Mukerjee. Hollywood for sure! I love romantic comedies and dramas and would love to do both.

Whom would you thank for helping you get to where you are today? Why?

My parents for sure. They really supported and encouraged me to do this without ever questioning me…even through the tough times. They really believe in me and never suggested that I do something else. Honestly, having them behind me like this is like having super powers. They really fuel a lot of my success. Indian parents could learn from their example.

Tell us something that you normally do not share with the mass media?