Garima Goswami, Darpan, 27 Feb, 2014 05:09 AM
Indians are widely acknowledged as bright and adroit individuals, who have over time contributed their knowledge and expertise in the intricate areas of science, mathematics and research and development. This is also one of the reasons why today international organizations are constantly in pursuit of outstanding students from this nation. One such organization that has been on the radar of several international organizations for distinguished reasons is Ramanujan School of Mathematics. This brilliant institute located in Patna, Bihar, a northern state in India, transmits the best of education to students, specifically those belonging to underprivileged families through a vigorous program called Super 30, thus enabling them to secure a seat in the most prestigious and top credited technological institute of India – Indian Institute of Technology (IIT). Ranked as the one of the top universities in the world, IIT is looked upon as a guaranteed guide to wealth and a secure future; a fact that is illustrated with the millions of students, who attempt to crack the challenging entrance exam each year.
Chiefly operated and established by renowned mathematician Anand Kumar, Ramanujan School of Mathematics runs the popular Super 30 program in India, which  has impressively set new records. As the name suggests, Super 30 is a group of 30 ‘super’ students, who are given strenuous training throughout the year with the precise motive of landing them in one of the extravagant eight branches of IIT. In 2008 and 2009, all 30 students in this program cleared the IIT entrance exam with flying colours, and in 2012, 27 students and in 2013, 28 students made it to IIT. 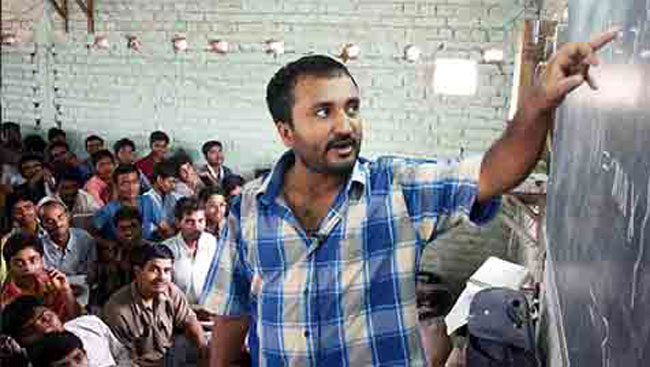 Coming from a family which highly relied on his father’s income, it was quite a blow for Kumar and his family when the sole breadwinner passed away. This was even tough at a time when Kumar was allotted admission to Cambridge University, but could not attend university due to poor financial conditions. “I had a dream of pursuing higher education in mathematics, as I had deep interest in the subject,” says Kumar adding that at the time he was offered admission at Cambridge, he didn’t even have money to buy a plane ticket. “My father was a low paid employee in the postal department. We tried a lot to get money for my education but we were not successful. I was supposed to join Cambridge on October 1, 1994, and I lost my father on August 23, 1994.” The sudden demise of Kumar's father came as a shock and a moment of owning up to his families responsibilities. “It was a question of survival for the family as the lone bread earner was no more and with him the dreams also died.” Struggling through a rough phase in life, Kumar started giving tuitions to a few boys and that proved to be a good start. “Later when I saw some students from the poor families, who could not even pay half-a-dollar, there was a thought of
doing something for them and it resulted in the birth of Super 30.”
Perhaps these students reflected a stage of life that Kumar had gone through and this motivated this math guru to deliver not only the best in education, but to also assist them in safeguarding an enhanced future.
The noted institute does not run on a formal structure and in the words of Kumar, it is a concept that he envisages to implement from his residence. Free and worthy education is accompanied with free meals and accommodation. Kumar is in charge of Mathematics and other teachers are assigned to teach Physics and Chemistry. Students are selected on the basis of an exam conducted annually and thorough scrutiny of each student.
Kumar and his team of teachers run separate evening classes for school students “for a modest fee.” This fee constitutes as a source of support for his family and also the entire program of Super 30. “The students are just like my family members.”
How the entire team manages to compile this compact structure and discharge quality education with guaranteed results is truly laudable. They affirm to continue this endeavour without any sort of external support. Donations from government and private organizations are strictly prohibited.
The exceptional quality of education imparted at Ramanujan School of Mathematics can be calculated by the fact that internationally acclaimed universities and prominent individuals in leading organizations have expressed interest in the Super 30 program. Recently, the renowned former NASA scientist Neil Pundit paid a visit to students enrolled in the program and gave them his dose of inspiration; encouraging them to aim for innovations in science and technology.
Though the setup of Super 30 might seem simple, it can be said that it took the sweat and blood of the entire team in the initial years. Since the concept was diverse from the conventional set of institutes established in the entire nation, Super 30 instantly caught attention from similar setups running on the lines of business. Especially institutes in his own region saw the program as competition. “They felt it could affect their business. But gradually, they realized that I was not the one to look back. Bihar police provided me with two armed bodyguards.” He adds to this and says, “When Super 30 started producing results to draw the attention of people, some did try to defame me, but that also did not work. After all, work speaks louder than words.”
Now after a successful and record- breaking track record, Kumar and his team have established a line of brilliant students that have now reached greater heights and carved a luxurious life out for themselves. Does he hear back from these successful students? “Yes, quite regularly. Some of them are in different countries, while others are well placed in big organizations. It feels great to see that the students continue to remember their roots,” says a proud Kumar.
In 2010, Kumar's extraordinary initiative made it to Time Magazine’s list of “Best of Asia.’ In 2013, he was invited to a university in Tokyo where he delivered a guest lecture and also held talks with Dr. Kiyoshi Kurokawa, an acclaimed scientist and professor at the National Graduate Institute for Policy Studies and science advisor to the Cabinet of Japan. Kumar is also regularly engrossed in writing mathematical articles for foreign journals; a habit he has kept abreast since he was  in college.
Kumar and his commendable program Super 30 reflects how any educational institute can impart a very basic and fundamental requirement – education – without constraining the individual with financial boundaries or clauses. The simple yet guaranteed structure rightly serves as a blueprint for other institutions and also convinces one to allocate education on the basis of equality. This convinced mathematician is steadily echoing his social campaign to the outer world and his work is indubitably getting noticed by luminaries. For the future, he plans to open a school for the poor students, “but that will require a lot of planning,” he adds.
Photo: Anand Kumar
Prev Next

Starring in today’s most popular comedy sitcom, Kunal Nayyar needs no  introduction. He comes aboard with his unique style of dexterity, wit and jest.

Kapany is heralded as the “Father of Fiber Optics” and his scientific contributions and groundbreaking developments have paved the way for technological advancements that have shaped the very nature of today’s world.

Jewellery designing is just one of the several shades that waris ahluwalia dominates. this fashion connoisseur has fabricated a journey with stops made in acting and modelling.

She faced challenges and obstacles along the way, meeting them head on and through determination, talent and charm; she has proved herself and today is the darling of Punjabi cinema.

Irrfan Khan doesn’t look at all as on screen. Films like “Life of Pi” and “The Namesake,” let alone the show “In Treatment” (in which he played a withered retiree), give the impression that Khan is deep into middle age.