All it takes is one person like Dhahan to lead others by example, and make a wave of difference.

The South Asian community in Canada is thriving and is the epitome of cultural diversity and showcases a wealth of passionate individuals. Barj Dhahan is one of them; he is the founder and president of Sandhurst Group of companies, which specializes in commercial real estate, and is one of the largest Esso dealers and Tim Horton’s franchisees in the province.

Dhahan, like many other immigrants, made his way from rural Punjab in the late 1960’s and since then has been residing in British Columbia. During his youth, in Grade 8 to be precise, Dhahan began working in Port Alberni at Dunbar’s General Merchandise Store, marking it a milestone in his career endeavours. “I learnt basic things one has to do to be successful in life and in business,” he says. His father has always been an inspiration for him because he was an entrepreneur in both India and Canada, he says.

Bridging the two countries that have shaped his identity has been a mission for him. Dhahan believes that the structure of society is similar across the world, where a government is established and economies seek to flourish. “The strong and successful Indian diaspora in Canada is a tremendous resource for both countries to help build greater bilateral trade relationships,” says Dhahan. Since Canada is rich in natural resources and agricultural production, his notion of strengthening ties can build bridges of opportunity.

In 1998, UBC’s School of Nursing initiated a partnership with the Canada India Education Society (CIES), of which Dhahan is the co-founder and director, and Guru Nanak College of Nursing in Punjab. This greatly contributed to primary health care practice, research and education while providing Canadian nursing students with valuable experience in India.

Dhahan initiated a health promotion in 2005 that contributed $500,000 in funding from CIES and Canadian International Development Agency (CIDA). Under his leadership, CIES partnered up with Indian non-profit organizations and the grant helped 60 villages in Punjab by building sewers and clean water systems in Daulatpur and Bomboi.

Being a humanitarian has always been easy for Dhahan because he enjoys contributing to society and making a difference. “Helping meet genuine needs is the best way to build respect, understanding and peace in the world,” he says.

His most recent initiative is the Dhahan International Punjabi Literature Prize, in partnership with the Asian Studies Department at UBC. The prize sheds light on authors from Pakistan, India, Canada and all over the world and unifies lovers of literature and provides a market for it. Contributors have up until March 1 to submit pieces that will be in the running for a cash prize of $25,000 for best book in Gurumukhi and Shahmukhi.

“Through this prize we want to recognize and honour Punjabi writers in the world and grow readership in Punjabi literature,” he says. The literature will be read by mainstream Canada through the translations of the prize-winning books.

Dhahan and his wife Rita (both alumni of John Oliver Secondary School in Vancouver), along with family and other alumni, established a ‘Wonder of Reading’ Legacy Fund in January of this year to help students, who need additional assistance with literacy. 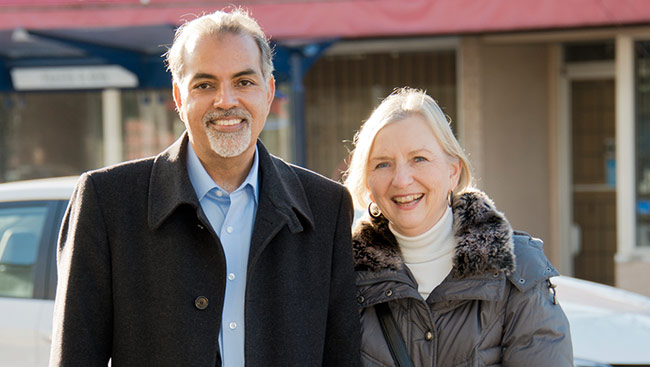 The Dhahan’s like many other families feel deeply connected to the community and their school and are looking for ways to show their support for the importance of reading and education. The John Oliver alumni community has pledged to raise $100,000 for the Legacy Fund to aid students in their educational endeavors and provide them with the necessary help to put them on the right track. The initiation of Dhahan’s literacy fund was a response to the recent statistics of higher than average vulnerability in literacy and related skills within the student popu-lation, and the philanthropic duo decided to reach out and make a difference.

“Literacy is an essential skill for everyone in order to excel in learning and in their work. We want to see that all students get an equal opportunity to succeed in high school and beyond,” he says. Dhahan explains that Rita and him are “serving as a catalyst to engage the larger community to contribute in such initiatives.”

The money raised by the Dhahans and the alumni group is being used to fund other reading initiatives the school has undertaken, including evening classes that are targeted to boost success rates to 100 per cent for students that are falling behind in their regular day classes.

Dhahan’s company, Sandhurst Group has awarded over $80,000 in annual bursaries to high school graduates going on to pursue their educational aspirations in university. With this great financial aid, students are able to get some financial help to start them off with post-secondary.

Society needs more individuals like Barj Dhahan to contribute effort into implementing new strategies to benefit individuals, schools or even organizations. All it takes is one person to lead others by example, and make a wave of difference.

This actor, model and television host is an activist and spokesperson for fashion hope, an organization that aims to expose, rescue and rehabilitate survivors of human trafficking.

Through perseverance, this valiant World War II veteran continued to fight for his rights as a Sikh and war veteran when faced with adversity here in Canada, and his story is one of hope, optimism and determination.

Jewellery designing is just one of the several shades that waris ahluwalia dominates. this fashion connoisseur has fabricated a journey with stops made in acting and modelling.

She faced challenges and obstacles along the way, meeting them head on and through determination, talent and charm; she has proved herself and today is the darling of Punjabi cinema.

Irrfan Khan doesn’t look at all as on screen. Films like “Life of Pi” and “The Namesake,” let alone the show “In Treatment” (in which he played a withered retiree), give the impression that Khan is deep into middle age.