Karm Sumal and Manny Bahia are the two entrepreneurs behind the hugely successful website Vancity Buzz, which keeps Vancouverites up to date on everything going on in their city. From covering news and events to everything in between, Vancity Buzz provides a broad range of content.

These childhood friends both graduated from Simon Fraser University—Sumal in accounting, and Bahia in business. Although these academic backgrounds aren’t usually associated with working in digital media, they have been able to cultivate their website through the passion they have for their work.

The website originally began as a hobby and over the years, it had gradually grown into what it is today. But how exactly does a hobby become one of the most-visited websites in Vancouver? Sumal sums up Vancity Buzz’s success in three simple ways, “passion, consistency and compelling content.”

In the early years when things were slow, and in the process of developing, they say that they did not get discouraged or lose hope. They always believed—even when others didn’t. Bahia explains that they faced their share of disbelievers, “People I knew back then were like ‘what the heck are you going to do with a blog?’” He also recalls how blogs and other websites, at the time, said that Vancity Buzz would only last a couple months. However, six years later, Vancity Buzz is still here, and it is at the forefront of digital media in Vancouver. Sumal and Bahia explain that the negative comments did not get them down. Instead of worrying about what others were saying, they focused on themselves and their content.

They reminisce that one of the early moments where they gained noticeable popularity was during the 2010 Olympics. Bahia explains, with a laugh, that despite the fact that they didn’t have a media background, and that they were unsure about how to get access into certain events and venues, that they did the best they could with “not being allowed to go anywhere.”

He goes on to say that they worked tirelessly during this period, pulling all nighters, having early mornings and writing as many guides as they could. Fortunately, this all paid off, “We heard from so many people that they loved it so much and our traffic really spiked… we saw people really liking our content so we just kept it going.”

Now that they have developed their company and learned so much along the way, they have some great advice for entrepreneurs and those wishing to enter the digital media field. Sumal suggests to “find something you’re passionate about and make that your career if you can… give it your best shot, do whatever you have to... and even if doesn’t happen, you tried, you gave it a good effort, and you won’t have regrets and what ifs.” 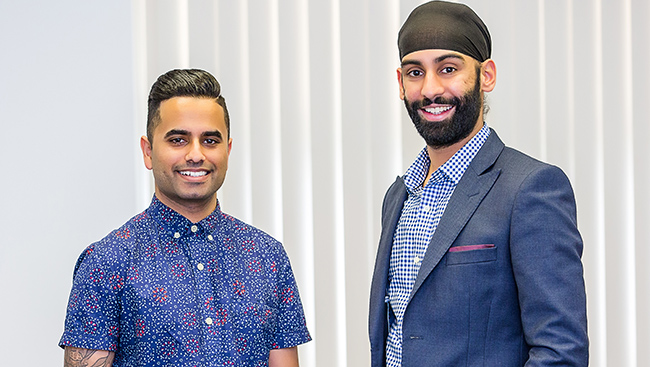 He says that it is important to keep in mind that it’s not going to come easy— “there’re going to be people that want to attack you, there’s going to be a lot of people telling you that you can’t do it… you really have to pour everything into it if you want to be successful in business, you have to love what you’re doing.” His tip is to surround yourself with supportive people, “I was lucky, my wife, even when she didn’t like it, still supported it, she never once told me to not do it.”

Bahia’s advice is to “find something you’re very passionate about, work hard, work smart and be consistent and patient.” He says that patience is the biggest thing that he has learned at Vancity Buzz and he also points out that it is okay to fail. “We failed a lot, we tried so many different things… we never would have known if we would end up successful or not if we didn’t try,”
Bahia says.

One wonders at how two childhood friends are able to work alongside each other in the way that Sumal and Bahia do. Some of the positive aspects they mention about working with a close friend is the fact that they know each other well and are aware of what the other is sensitive of. On the other hand, they admit that mixing work with friendship isn’t always a good idea and that keeping those two areas of life separate is often advisable. But at the end of the day, both strongly believe that if you have the same goal in mind, you can make it work.

Throughout our conversation, Sumal and Bahia continuously emphasize Vancity Buzz as family, and describe everyone as passionate, on the same page, and working toward
the same goal for the company. With this type of company culture that they have fostered, it is clear to see how Vancity Buzz has risen to the top of the digital media landscape and has
been able to stay there.

Ajay V. Bhatt, is known for his contributions to the world of technology in the form of his co-invention, the USB (Universal Serial Bus).