Now in its modern state, human trafficking has grown to become a $32 billion industry. It is claimed that on average pimps earn approximately $67,200 from every single girl trafficked in an industry that has over 20.9 million victims worldwide, as of 2013.

Let us gear our attention towards a different set of numbers now. The country is Nepal and the city is Kathmandu. Over 1,200 individuals convicted in a period of 12 years and more than 25,000 females rescued from Nepal and India by Maiti Nepal, a non-governmental organization founded by Anuradha Koirala, a social activist who has dedicated her life towards the rescue and rehabilitation of survivors of human trafficking.

A series of events in Koirala's life led to the conceptualization of Maiti Nepal. Hailing from Kathmandu, this activist dreamed of pursuing a career as a teacher and rightly so, after completing her academic education in India, Koirala progressed to profess her career as an English teacher for over 20 years.

It was in 1990 when Nepal had acquired democracy, Koirala recalls how every morning she would visit the famous Hindu temple of Pashupatinath in Kathmandu. On the extensive grounds of Pashupatinath, Koirala would notice women begging with their children. "They (women) were healthy. Slowly I started talking to them and got to know that they were survivors of one [kind of]violence or the other."

"I asked them if they wanted to work and they said 'who will give us work.'" In coherence with the age old thinking of treating women afflicted with plights of domestic violence and sexual exploitation as pariahs, these women were left to fend for themselves on the streets, some with their children. "So I asked them that if I give you [a] job will you work and they said 'of course we will work.'"

At this point in her life, Koirala, though not legally separate, was living away from her husband. With a monthly salary of only Rupees 7000 ($80 CDN), Koirala had taken charge of not only providing a livelihood to eight women, but was also responsible for the education and nurturing of her son who was very young.

She provided these eight women with small shops on the streets where they sold items such as candies and matchsticks. While further delineating the inception of Maiti Nepal, Koirala says, that she started talking to these women about the dangers of trafficking, and one day they approached her saying “you (Koirala) talk about trafficking and we fear that our girls might be sexually exploited or trafficked by men.”

Consequently, Koirala rented a two-bedroom house, where she shifted with her seven-year-old son and ten girls. “I used to sleep in the corridor with the children. Some children were in the room and some in the corridor on the floor.” To render her time towards the safety of the young girls, along with providing the women with a stable livelihood, Koirala gave up her full-time position as a teacher and within a year and a half, she was broke. “I used all the money I had and sold all the jewellery I had,” Koirala recalls, while humbly adding that “the people around the community were really nice. They used to give me loans in shops. The landlord would still consider me without me paying rent for 2-3 months.” 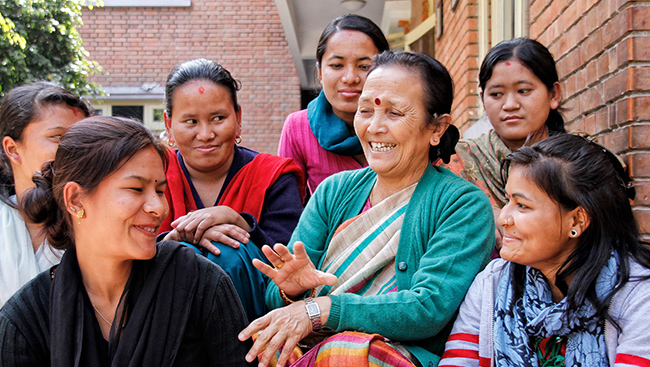 Eventually, an individual from UNICEF (United Nations International Children Emergency Fund) learnt about Koirala and asked her to register Maiti Nepal with the government so he could support her cause and initiative. After registering the organization the individual from UNICEF asked her how she wanted him to assist her. “I told him very clearly that the first thing I would like to do is [spread] awareness in the villages.”

The newly conceived democracy was stirring debates on issues that were earlier hushed in social milieus; trafficking being one of them. Intellectuals from various fields including law, media, administration, and medicine were seen contesting views and regulating rules in this direction but were clearly detached from the ground reality.

“I told him that I would like to take a whole bunch of people and go to villages. Earlier there were only seven districts that were very problematic. So I said that I want to go to all these districts with lawyers, doctors, students, judges and journalists. I wanted them not to talk hypothetically in the cities, [after] hearing other people. I wanted them to see the facts. That is how I started and when I did awareness, everyone came to know about Maiti Nepal,” Koirala explains.

The initial steps in the institutionalization of Maiti Nepal were emotionally tough for Koirala. The extensive involvement of her time with the girls resulted in Koirala losing her son to drug addiction at the age of nine. “I got him back and looked after him when I had no time to look after him. Till today I have no time to look after him. My responsibility is more towards Maiti
Nepal then my son.”

All throughout the existence of Maiti Nepal, Koirala has stayed exposed to the terrible dangers that take refuge in this billion dollar market. I ask Koirala about the dangers she encounters, and with a fearless persona, she replies “Danger is always there. But if you feel there is danger and you don’t work then who will work. Someone has to do the work.” She elaborates saying “So they (convicts) phone from jail and threaten us that 'we know where you are, where your son is, what your daughter is doing, where they are educated and we can do anything' and I say, 'ok try your luck.'”

Despite the dangers, Koirala has manoeuvred the functionality of Maiti Nepal to not only survive, but in fact grow and benefit victims beyond Kathmandu. There are currently 11 transit homes, five rehabilitation/reintegration programmes, two child rights programmes, a legal assistance team for survivors, and several other projects incorporated for the rehabilitation of those affected by trafficking. 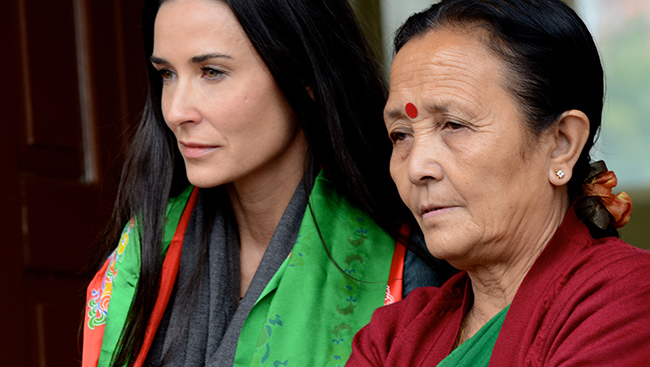 When a girl is rescued, the first step is to have her identify the criminal. While Maiti Nepal assists in fighting the legal battle, survivors are given accommodation in shelter homes and during this period they are instilled with vocational training. “We cannot send the girls back home during this period because the case can become hostile anytime. They (convicts) [can] say ‘withdraw the case, we will give you money, build a house for your parents' and if the girl does that, the case becomes hostile.” The shelter homes provide training, informal education, medical assistance, empowerment programmes, counselling and antiretroviral therapy (ART) to women and children infected with HIV.

Traffickers lure girls from Nepal, with promises of better jobs, but instead escort them to brothels, across the country and beyond, India being the major destination. A team at Maiti Nepal works with border guards to scrutinize suspicious activities.

Koirala’s crusade in rescuing women and girls from the various trades of trafficking has been honoured with several national and international awards including – the Peace Abbey Courage of Conscience award in 2006 for her work to “rescue, rehabilitate, and support some of the thousands of girls and women who have been trafficked from Nepal to India to be sexual slaves in brothels,”; the German UNIFEM award for her humanitarianism; CNN Hero of year Award for “protecting the powerless” in many years of her human service in 2010; and the International Sensation award at DARPAN’s Extraordinary Achievement Awards 2014.

Due to the continuous struggle of Koirala, including individuals and organizations associated with the cause, the Government of Nepal recognized September 5th as Anti-Trafficking Day. She was also appointed as a state minister because of her selfless dedication to social work and contribution towards the issues of children and women.

Starting from a small house, this activist has taken Maiti Nepal and the cause across national borders. Koirala has not allowed the perils of this heinous industry to pull her away from her commitment to rescue the victims shoved into the horrors of its vicious cycle. Responding to my question about how she sees the future of Maiti Nepal, Koirala says, “I would like Maiti Nepal to be closed. I don’t want to see any trafficking in the world so what is the need of Maiti Nepal. No trafficking, No Maiti Nepal.”

Her efforts clearly illustrate that you do not need an army to rescue or change someone’s life, all that is required is strong will-power. “I have been fighting for 21 years and it (trafficking) is still there. It may take time but there will come a day when there is no Maiti Nepal, and women and children of this region (Nepal) will be free of sexual exploitation.”

*Statistics noted have been taken from Havocscope.com and Dosomething.org

Whether faced with praise or controversy, Singh remained stoic to his beliefs and values and is recognized as one of India’s most prolific novelists and figures

After acquiring Sikh artefacts, including the majestic sword of Maharaja Ranjit Singh, Dhillon hopes this will ignite a discussion amongst all Canadians, who will also strive to become custodians of Sikh treasures here in Canada.

Over the years, the BC Teachers’ Federation (BCTF) and provincial government have had a tumultuous relationship and as a result, their disagreements have often made front page news. In the latest round, teachers have moved forward with an escalation in job action to stage 2. We had a chance to sit down with BCTF President Jim Iker, who advocates on behalf of BC’s 41,000 teachers and their students for improved educational conditions, to learn what he had to say about his new role, ongoing negotiations and what needs to be done.