Bhullar is on a unique trajectory where he can make waves for all Indo-Canadian athletes to show that anybody can succeed with high levels of effort and competitiveness to reach their goals.


With a highly successful career in wrestling and Mixed Martial Arts (MMA) fighting, Vancouver-based Arjan Singh Bhullar rightfully owns the title of a winner. Bhullar’s big breakthrough came in the 2010 Commonwealth Games where he took home the gold medal for the men’s freestyle 120kg wrestling competition in New Delhi. Another huge moment was when he was chosen to represent Canada in the 2012 Summer Olympic Games in the men’s freestyle 120kg wrestling competition in London. This also earned him another distinction – of being the first wrestler of Indian descent to compete for Canada at the Olympics in freestyle wrestling.

Although his wrestling career has been extremely productive, Bhullar set his sights on accomplishing even more. He decided to pursue MMA and try his hand at the fast growing sport. He had been 6-0 in regional MMA leagues including becoming the Battlefield Fight League Heavyweight Champion. This gave him the opportunity to join the top MMA league in the world, the Ultimate Fighting Championship (UFC). Bhullar touched on his progress from the local fights to the big stage of the UFC.
“This whole process has been about getting to the UFC. Canadian promotional fights were part of the development as I needed that experience to prove I could dominate in the octagon. I started in the minor leagues and now I’m in the big leagues ready to show the world I can be the UFC Heavyweight Champion,” says the first Indo-Canadian fighter to compete in the UFC.

Bhullar’s first fight in the UFC came on September 9, 2017, at UFC 215 in Edmonton, Alberta. It was against heavyweight bout Brazilian Luis Henrique. The second round of the fight was the dagger for Bhullar as he was able to knock Henrique down with a thunderous punch and followed that up later in the round with a ferocious takedown slam. His performance was nothing short of outstanding and he won by a unanimous decision from the judges.
After the match he was interviewed by current UFC light heavyweight champion Daniel Cormier who has been a mentor to Bhullar, assisting the latter’s progression. Winning the fight, that too on home soil in front of his fellow Canadians in Edmonton, just made the night even more special for the inspiring fighter. “It was surreal, the atmosphere was crazy,” describes Bhullar, recalling that moment, “I knew of people from BC, California, the UK and India all coming to Edmonton to support me in this fight. I definitely had the home field advantage thanks to all the amazing fans that showed up. I’m glad I was able to give them a victorious performance.”

Bhullar has amassed a large group of supporters from all over the world. As an Indo-Canadian Sikh wrestler, he is certainly the first of his background to have reached such great heights, and the people are taking notice.

Outside of the ring, Bhullar remains committed to initiatives aiming to do better for the community. He is currently a spokesperson for The Esteem Team which is a national organization comprised of professional athletes who look to aid the community and inspire the youth. Bhullar is also a spokesperson for the Ending Violence Association of BC (EVA BC) which is a program designed for males to work to end violence against women. He is the co-founder of Kids Play, a non profit organization working towards keeping kids away from the lifestyle of drugs, gangs and violence through sports tournaments, conferences, and other projects for the youth community. 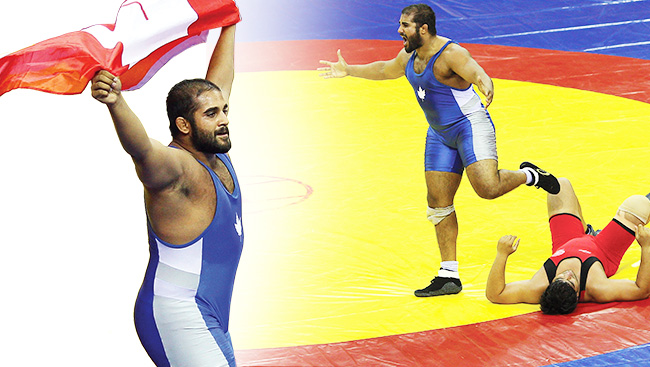 Bhullar feels very strongly about these causes and hopes he can make a real difference wherever and whenever he can. “I want to be able to contribute to these main causes. Kids being active, empowering women and ensuring there is access to clean water around the world are issues I want to make an impact with.”
There is no uncertainty in Bhullar’s path. He is gunning for that UFC Heavyweight Championship title. As the 19th ranked fighter in that class, he has a long road ahead of him but Bhullar is no stranger to adversity. He is all ready to prove that he can conquer this challenge with his combination of mental fortitude and physical prowess. Bhullar is on a unique trajectory where he can make waves for all Indo-Canadian athletes to show that anybody can succeed with high levels of effort and competitiveness to reach their goals. Everyone should be taking notice of Arjan Bhullar’s ascent to stardom.
Prev Next

Singh, founder of international non-profit aid and relief organization Khalsa Aid, has taken it upon himself to create a world that believes in equality and charity. Through Khalsa Aid, he has been reaching out to various corners of the earth helping those in need and in turn rekindling people’s trust in humanity.

The Citizen of the Year award honours an individual who has given long-standing and exceptional community service towards making Surrey a better place to live.

Bal grew up and studied in the Surrey region. At 19, he got his realtor’s license, and by 22-23 he had his own real estate brokerage.

2016 was a year where we saw the Defence Minister take up important issues affecting the country and its people and bravely and fairly finding measures to deal with them.

A successful entrepreneur, well-known personality in the South Asian community and beyond, and a philanthropist – Dave Mann, founder of Isle of Mann Construction Ltd. and Mannkind Charitable Society, is known by many names.

Each initiative of Vikram Vij has been better than the last – the recent one being his association with Air Canada and the introduction of his food on their Vancouver to New Delhi flights.