In the super populated Indian temple, Lakshmi is the domesticdeity representing wealth and the embodiment of beauty, grace, and charm. Padma Lakshmi does not stray from the classic description of the Hindu god; in fact, the mere mention of her evokes an immediate association to a stunningly beautiful woman with a stellar physique and long flowing dark hair. While her obvious beauty is easily noticeable Padma Lakshmi is an award-winning cookbook author, an internationally renowned actress and model, the host of Bravo’s highly acclaimed Top Chef, and an ambassador for the United Nations Development Fund. 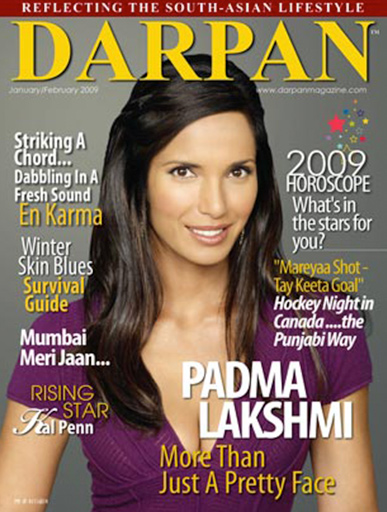 Born in Chennai, India on September 1, 1970, Lakshmi spent her childhood in India, but came to the United States as a young teenager. Being in New York quickly enabled her to immerse herself in the culinary melting pot, where she fell in love with global cuisine. Padma talks about her mother as her inspiration for her culinary talent. “My mother was a great “what’s-is-in-the-fridge- throwit- together kind of cook.” Padma recognizes all the subtle ways her mother helped formulate her affirmative years. She recounts how her mother wanted her to not be viewed as different when taking her rice and bean lunch to school. Instead, she ensured that Padma was eating meat like steak and liver, which in the late 1970’s symbolized good health. “To me the definition of a good cook is someone who really has a command and mastery of their ingredients and knows how to manipulate those ingredients. To manipulate the combination of those ingredients and know how to make that dish better than the collection of things on the plate. My greatest pleasure is to send out a plate before someone and watch them eat,” said Lakshmi. “It is true. I love to hear someone say, ‘Mmmmm’.”

Padma attended Clark University in Massachusetts and got a bachelor’s degree in theater arts. Her real dream was always to become a model; however, her mother insisted she think of school before beauty. “My mother had said that if I was beautiful at 17, I would remain beautiful at 21, but with a degree in hand.” Also at that time, she was in a serious caraccident, which left a seven-inch scar on her right arm. This later became her signature feature that made her that much more exotic. Her last semester of college was spent in Spain, where she landed her first modeling job.

Soon after, Helmut Newton, a photographer most well-known for his stylish pictures, wanted to photograph Padma. Giant fashion magazines like Vogue, Elle, and Glamour quickly rushed to include the model in their pages, leading to Padma becoming an overnight sensation. Suddenly she was booked by everyone, “Modeling was very good for me. It allowed me to do things that I would never have been able to do. I liked the people I met, I liked traveling first class. I liked the world it allowed me to enter. Once I was in the room, it was up to me.  Modeling was my ticket.”

“I began my Hindi film career with a bang. I mean, to start off opposite Amitabh Bachchan is pretty damn good. I am looking for an agent in India.I would like to work with people like Aamir Khan,for example. I have met him. I have seen a lot of his work, from Lagaan to the Coke commercials and I really respect his talent.”

Her travels as a young model took her around the world, but no matter where she landed, she always tried replicating the flavours of home: her mother’s Indian food, the Filipino noodles of her neighbors, the dishes of Spanish Harlem and Chinatown.” After modeling for Versace, Armani, and Ralph Lauren, and the constant experimentation in the kitchen resulted in her first cookbook, Easy Exotic, in 1999. This soon led to a hosting job for Planet Food, a documentary series exploring the culture and cuisine of different countries. Despite her bountiful and broad-based food experience, she still struggled with being taken at face value.

Padma’s frequent returns to India resulted in starring in Bollywood films likeCaribbeans and Sandokan: The Darkness and the Light. She quickly became a household name in India, so much so, that American studios wanted to capitalize on her talents. She was cast in Sylk, Glitter, guest-starred in an episode of Star Trek Enterprise, The Ten Commandments, and Sharpe’s Challenge. In 2003,Padma starred in her biggest Bollywood film, entitledBoom, which did not fare well at the box office, but lead to a role alongside Aishwarya Rai and Dylan Mc-Dermott in The Mistress of Spices.

Lakshmi notes, “I did begin my Hindi film career with a bang. I mean, to start off opposite Amitabh Bachchan is pretty damn good. I am looking for an agent in India. I would like to work with people like Aamir Khan, for example. I have met him. I have seen a lot of his work, from Lagaan to the Coke commercials and I really respect his talent.” She admits her Hindi is not the greatest, but would spend the time to ensure her pronunciation and slang were perfected for a film. On the other hand, her Tamil pronunciation is perfect and is considering the possibility of Tamil films. “I would love to meet Kamal Haasan.”

Lakshmi is newly single after divorcing novelist Salman Rushdie to whom she was married to for three years. When asked if she misses married life, she answers with a resoundingly, “No.” She states, “I miss the good times I had with the man I was married to, but I am much happier today than I was a year and a half ago. In order to get there, I had to walk through an ocean of crap. But I have built my life around the way I want to live now, and my little corner of the world feels nice.”

She has been using her break to focus on more business. On the horizon are more cookbooks, another cooking show, and a brand of chutneys, a jewelry line, and a memoir. “If I do not conquer the world, that is fi ne,” said Lakshmi. “I want to teach people about things and places and foods they do not necessarily know. I think it is important to sample and taste what the rest of the world is about. Maybe  it comes from being an immigrant child and wanting others to understand me.”

In her current role, as host of Top Chef, Padma balances respectability among the Contestants. She is likable among the reality TV circuit and utilizes her smooth voice, when she affi rms to the latest ousted contestant each week, ‘Please pack your knives and go.” While hosting, Padma works alongside judges like Food &Wine’s Gail Simmons and Tom Colicchio to explain elimination challenges and critique the creations of talented chefs each week. “I have lots of fun doing the show and can gain 12 to 15 pounds easily in a season,” says Lakshmi. “The chefs are very serious and I have great compassion for them because they have to think quickly on their feet. What makes it so engaging is that these are people who are striving to be the best at what they do.”

Top Chef has never been hotter, with the series averaging three million viewers, making it cable’s number one food show. Due to the success of Top Chef, “I can get a table at any restaurant I want,” Lakshmi shares. Originally, she imagined the show as good publicity for her latest cookbook, but turned down the fi rst season to work on a BBC miniseries. When she is not fi lmingTop Chef, her time is shared with an assistant and a designer, who are helping her develop a line of Indian-inspired jewellery. Lakshmi confidently knows she is beautiful, but believes her greatest asset is not her beauty, her intellect, or her good sense. Rather, it is her taste.

“Whether it is my taste in food, my taste in clothes, my taste in music, furnishings, or art,” she says, “that is one skill I have, and it can be applied to everything.” Furthermore, she affirms, “the things I have accomplished have really been on my own steam. For good or bad, every word, every picture, every taste is mine.”

Interspersed with wonderfully candid essays, Tangy Tart Hot & Sweet offers more than 100  sophisticated yet easyto-follow recipes that not only promise to please the palate through refined, modem simplicity, but also encourage individual creativity in the kitchen. Each satisfying dish is a reflection of how Padma eats: fresh ingredients, clean flavors, and a healthy dash of the unexpected. Best of all, this is food that any cook can make—any night of the week. Tangy Tart Hot & Sweet is the perfect book for anyone who wants cooking to be easy, elegant, and unforgettable.

Along the way, Padma shares anecdotes and recollections told with passion, insight and humor. Among them, the story of Jhoti, The Peanut Man, whose distant cry from down the beach would send a young Padma running to her grandfather for rupees to buy Jhoti’s delicious concoction of boiled peanuts, diced tomatoes, fresh coriander, green chilies, salt and lime juice; the inspiration for the Warm Peanut Salad.

Padma’s love of food started at a very young age and has been influenced by those who have come into her life. Padma’s earliest childhood memories include shelling peanuts and eating pickles at her mother’s side in the kitchen. Upon moving to New York, her palate would be shaped by a Peruvian babysitter, her mother’s Caribbean boyfriend,  a playmate from the Philippines, and culinary field trips to a variety of ethnic neighborhoods like Chinatown and Spanish Harlem. She has eaten her way through every course, every city. Through it all, her passion for food has defined her: “Eating and cooking is as much about our  identity as about our mood…. The American palate is the most open and inviting audience for the world’s flavors. When I look at how Americans eat today, I come to the conclusion that we are all a little bit Chinese, a little bit Mexican, a little bit Italian and French. Our lives have all been touched by the  many cultures that coexist among us.”

Aravind Adiga: The Man Behind The Booker Prize

Aravind Adiga, winner of 2008's Booker Prize for his debut novel The White Tiger says, “his novel highlights the brutal injustices of changing India, which is on the verge of inheriting the world from the West.” It is a story that is set in today’s India, and revolves around the great divide between those Indians who have made it and those who have not.

Aravind Adiga: The Man Behind The Booker Prize

“Be proud of your heritage, of who you are, says Jasbir. He adds, “Today I am recognized because I’m a Sikh, because I wear turban and because I have a beard. Without this I would not have got the kind of recognition and reception I’m getting currently.” Jasbir Singh Tatla