A machine operator at a local sawmill by day and a weightlifter by heart, Dhaliwal has been competing in the sport for the past 40 years.

The key to a long-lasting and satisfying life is passion. No matter the age, passion for work, an activity or even a prominent goal is what keeps one going. It is this passion for weightlifting that has motivated 65-year-old Raghbir Singh Dhaliwal to be an active participant of the sport and win recognition and awards over the years.
A machine operator at a local sawmill by day and a weightlifter by heart, Dhaliwal has been competing in the sport for the past 40 years. Though he wanted to learn weightlifting quite early on in his life, there weren’t many opportunities to do so in his hometown of Dhaliwal, in Punjab, India. So, when he immigrated to Canada and settled in Port Alberni, BC, in 1972, his passion found the opportunities it had been waiting for. 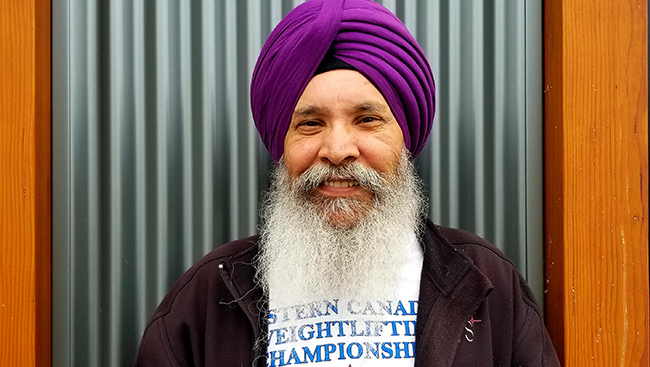 “When I came to Port Alberni I saw a picture of Rashpal Singh Rai and Jodhi Singh Rai in the local newspaper after a competition that they had lifted in. I got a hold of them and started lifting and have not looked back every since,” shares Dhaliwal who competes at championships in the 69 kg class.
Rashpal Singh Rai has been Dhaliwal’s inspiration and a pillar of support throughout his journey. Dhaliwal has therefore been organizing Rashpal’s memorial meet for over 20 years, which has now become one of BC’s biggest meets. Dhaliwal has won numerous BC Championships and placed second at the North American Masters Games. Back in 2007, he competed and won a medal for Canada at the Pan American Masters Championships in Texas, USA. The same year, Dhaliwal also competed in Kelowna and won the BC Championships in the same class that he had won 20 years ago. This win has been a memorable competition for the BC weightlifter because on the last minute he made weight, and on the Clean and Jerk, he ended up winning. 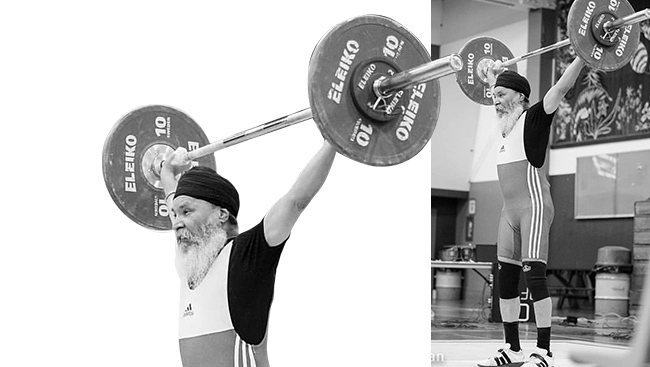 The latest in Dhaliwal’s long list of achievements is the 2018 BC Masters Championships in which he ranked number one and qualified for the World Masters Weightlifting Championships in Spain in August later this year. The dedicated weightlifter also set a new Snatch, Clean and Jerk and Total BC Record where he lifted a total of 112 kg.
Despite the wins, the renowned weightlifter recounts that it was not easy to get to this success point. Initially when Dhaliwal immigrated to the country, he faced a lot of family pressure to focus on work and job security – a path that is traditionally seen as the only way to settle in for an immigrant. But Dhaliwal knew he was not going to let go of the opportunities that Canada offered him. So he made sure he utilized the 24 hours of each day well and was determined to not only work full-time but also lift full-time.
Beyond fulfilling his passion for weightlifting, Dhaliwal’s other goal was to train those who want to follow in his footsteps. He now runs the EMS Weightlifting Club where he has coached many weightlifting enthusiasts who have gone ahead to compete nationally and internationally.
Currently, Dhaliwal has his eyes set on the World Masters Championship in Spain, and he hopes to bring a medal home for Canada. We wish him the very best in his future endeavours.
Prev Next

But seeing that Indian culture was hardly depicted through art got him interested in a career as a painter.

Sonia Sidhu, co-host of Mornings with Kevin and Sonia, is a popular name and face in British Columbia’s radio circuit.

Diagnosed with an autoimmune disease called lupus and a chronic pain condition called fibromyalgia since her teenage years, Zoya’s physical condition and medications significantly affected her quality of life, including her passion for fashion.

Amani’s findings, the thought of her sister, and family inspired her to establish a national, non-partisan, not-for-profit organization that advocates for the prevention of adverse drug reactions – Adverse Drug Reaction Canada.

A distinguished name in the South Asian community, Arora is the founder of Strata Queens and specializes in townhouses, condos, apartments and offices.