Vijay inherited his talent from his grandfather, the late Ustad Lal Chand Yamla Jatt, who was a renowned folk singer and popularized the North Indian musical instrument, tumbi.

A very important event for the South Asian community in April is Vaisakhi. Not only does this hold immense religious value for multiple communities, but it is also a time to showcase the cultural roots and heritage that Vaisakhi is known for. A prime example of this can be seen through the story of Vijay Yamla, a talented Punjabi folk singer and musician.
Born into a musically-gifted family, Vijay inherited his talent from his grandfather, the late Ustad Lal Chand Yamla Jatt, who was a renowned folk singer and popularized the North Indian musical instrument, tumbi. Vijay’s grandfather worked hard to promote Punjabi music and culture all over the world. “By listening to his songs, I was inspired to pursue music ever since I was a child,” says Vijay, who proudly adds, “I instantly fell in love with music, and realized that the purpose of my life was to preserve and spread the rich form of folk music in every corner of the world.” 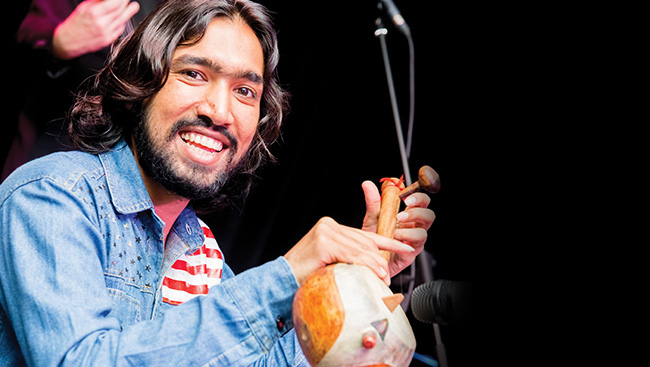 Vijay started his musical journey by first learning various instruments at home with his father. His father would play the dholak and accompany Vijay’s grandfather in his performances. “I further went on to learn the tumbi, which has become my favourite instrument, and I learned this through the guidance of my elders, who would often play it around me,” he adds. Vijay continued to grow his wealth of expertise for instruments, and soon learned to play the tabla, dhol, alghoza, dhadd, bugdu, morchang nagada, chimta and naal. Many of these are used to accompany the popular Punjabi dance form bhangra, which Vijay is also very skilled at.
The talented musician’s singing ability and skillfulness with many instruments got him instant fame at the young age of 12. His career had officially begun, and so Vijay started to perform on stage individually, and alongside other professional artists. “I gained a lot of valuable experience in the music industry, which helped me grow as an artist,” explains Vijay, who even received the chance to work with famous personalities of the Bollywood industry, including Shyam Benegal and Amit Trivedi.
When asked about his proudest achievement, Vijay excitedly shares that “it has to be performing for MTV’s Coke Studio Mumbai in August 2015, where I got to work with Gurdas Mann and Diljit Dosanjh, two incredible artists in today’s date.” This performance was much loved by all audiences, and has been a notable milestone in the multi-instrumentalist’s career so far. Over the years, Vijay has released multiple singles that showcase his vast talent and love for music, and has also received many honours for his notable work, including gold and silver medals in competitions throughout India.

One of Vijay’s most memorable opportunities has been the experience of teaching Punjabi instruments overseas to people of diverse cultural backgrounds. He has taught in many academies, colleges and musical workshops in both the government and private sectors. Recalling one such past memory, Vijay says, “I thoroughly enjoyed working as a coach for six months at the Royal Academy of Bhangra in Surrey, BC. It is so great to be spreading my love for the Punjabi culture to kids in Canada who want to learn about their culture.”
Through his work and artistry, Vijay continues to promote Punjabi music and culture. In the near future, he plans to release new singles in order to keep his passion for folk singing alive. He also hopes to take on new projects both as a music director and singer. Vijay is a great example for all to realize that understanding the significance of our cultural roots is extremely important for securing a positive future for generations to come.
Prev Next

Though he wanted to learn weightlifting quite early on in his life, there weren’t many opportunities to do so in his hometown of Dhaliwal, in Punjab, India.

But seeing that Indian culture was hardly depicted through art got him interested in a career as a painter.

Sonia Sidhu, co-host of Mornings with Kevin and Sonia, is a popular name and face in British Columbia’s radio circuit.

Diagnosed with an autoimmune disease called lupus and a chronic pain condition called fibromyalgia since her teenage years, Zoya’s physical condition and medications significantly affected her quality of life, including her passion for fashion.

Amani’s findings, the thought of her sister, and family inspired her to establish a national, non-partisan, not-for-profit organization that advocates for the prevention of adverse drug reactions – Adverse Drug Reaction Canada.