Being Mercedes-Benz’s top-selling model, you knew the German automaker was going to make sure the new C-Class was something special not only to drive, but also look at and sit in, as well. And it is all that, as well as being lighter, roomier, and more high-tech, to boot.

Premiering at last year’s Canadian International Autoshow in Toronto, the C is completely redesigned and comes in two flavours for our shores: the four-cylinder C300, and the one I tested, the C400 bi-turbo with a V6. Although a bit bigger than the outgoing model — 94 millimetres longer and 40.6 millimetres wider — the 2015 version is approximately 100 kilograms lighter, thanks to the use of aluminum in the body’s construction.

The vehicle is visually striking. Mercedes says nature was source of inspiration for its design, which I gather is where aesthetic cues such as the windswept fender and door creases come in. It’s curvy, but in a muscular rather than a feminine way like on the CLA. The facial features are big and exaggerated: large fibre-optic equipped LED headlamps, a polished two-slat beak of a grille, and due to the optional sport package, a chrome AMG front bumper splitter, a pair of gaping front air intakes, and massive brake calipers clamped onto cross-drilled rotors.

For its price bracket, starting at $51,400, the interior is rather well appointed. The first thing I’m going to comment on is the Burmester Surround Sound System ($1,000 option). The door speakers are finished in a sporty/retro/classy brushed aluminum, and emit a full tonal range that sounds amazing whether you’re listening to jazz or EDM. A freestanding display screen dominates the dashboard, and is controlled via a rotary knob and a hand rest that looks like a floating smartphone. Like on a modern phone, it accepts touch gesture inputs. At times, it’s also equally frustrating to master.

Sitting inside the C400 feels oddly welcoming. Glance up, and you’ll notice the giant piece of glass that dominates most of the black-coloured roof. 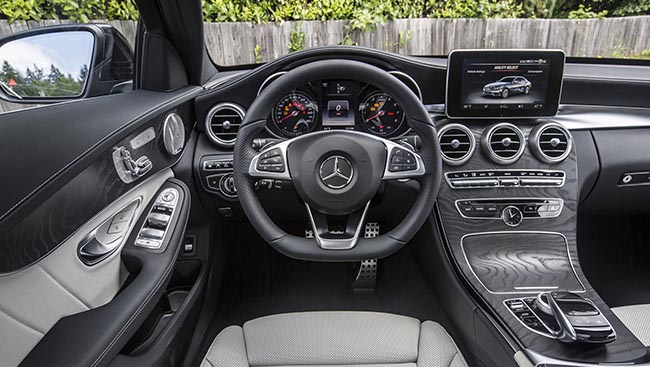 Buckle in and press the engine start button, and you’ll be greeted with a slight hug as the seatbelt electronically pre-tensions itself. Everything happens without a sound, because engineers have “optimized the noise characteristics” of several key components
from the power windows to the seat motors.

Unfortunately, what’s happened is that even the sound produced by the 329 horsepower, 3.0-litre twin turbo engine is somewhat muffled. I suppose what really matters is that the performance is there. The decreased weight of the car can really be felt when you’re tossing the car around. Throw in the permanent 4MATIC permanent all-wheel drive system and seven-speed 7G-TRONIC PLUS with manual mode and you’ve got a luxury sedan that’s actually enjoyable to drive.

So what’s the bottom line? The reimagined C-Class, in particular the C400, is above its class in terms of what Mercedes has managed to trickle down from its higher-level lines.