Residents in Surrey may soon start noticing a rash of new Hyundai Tucsons in their neighbourhood. And if you find yourself driving behind one, you might notice something different — that there aren’t any exhaust fumes, or even a traditional tailpipe, for that matter. Meet the new Hyundai Tucson Hydrogen Vehicle.

In late November, the Korean auto manufacturer announced they are going to be the first in Canada to offer a zero-emission hydrogen fuel cell vehicle to consumers, with the initial units arriving in the Lower Mainland in the coming months. Currently, the primary designated fuelling station in the Lower Mainland is located at Surrey’s Powertech Labs, a subsidiary of BC Hydro.

“This is not an announcement about another pilot program or some government fleet test,” said Don Romano, president and CEO of Hyundai Canada during a press conference, who held up a clear glass of water that he called “exhaust.”

“We’re going to grow a new segment in the industry by taking this first step because we’re confident in the fuel cell technology.”
Called the Tucson FCEV (Fuel Cell Electric Vehicle), it is based off the company’s existing compact crossover platform with the exception of the drivetrain. In fact, besides some extra badging, the re-engineered Tucson looks remarkably like its gasoline-powered sibling.

This is in stark contrast to Toyota’s take on the subject with their Mirai, a futuristic-looking hydrogen sedan that is already available in Japan and set to enter the United States later this year. 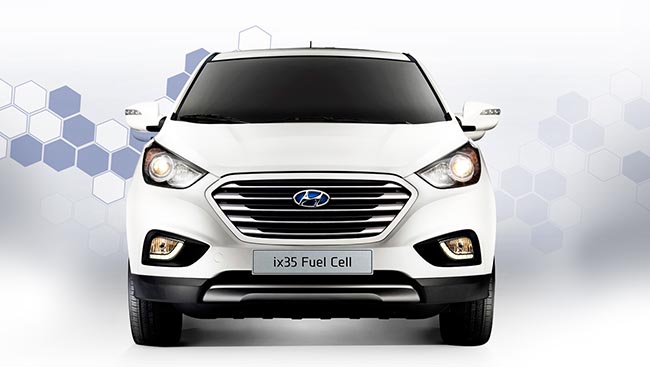 Romano said utilizing a familiar platform allows for leveraging economies of scale if and when demand grows, something he sees happening. The crossover runs quietly off a fuel cell stack that converts hydrogen gas into useable energy for the electric motor, producing 134 horsepower and 221 lb-ft of torque. Filling up the tank is a similar process to conventional cars and takes less than five minutes — in comparison to 30 minutes, the quickest recharge time for plug-in electric vehicles — and can drive for a distance of 426 kilometres.

Eric Denhoff, president and CEO of the Canadian Hydrogen Fuel Cell Association, got behind the podium to dispel some prevailing myths about the new power source.

“We’ve demonstrated that the vehicles could work here. People said ‘Hydrogen fuel cell technology won’t work, it’s not practical.’ They were wrong. They said, ‘Well, you can run demonstration fuel cells in Vancouver where it’s nice and warm, but it won’t work in the cold, it won’t work in the desert.’ They were wrong. They said ‘You’ll never have commercially available fuel cell vehicles in Canada or North America,’ and today we’re here to say: they’re wrong.”

The Tucson FCEV will be available on a three-year lease at $599 a month, and that includes all scheduled maintenance over that period, roadside assistance as well as all fuel costs. Interested parties can visit hyundaihydrogen.ca to sign up and find out more.