A car with beauty and balance

I  will be the first to admit that the Cayman 718 for me has to be one of the best looking cars on the road. The way Porsche has made the car look so well-balanced with a motor and transmission sticking out the back is amazing. This love for its good looks was not just from me but my neighbours as well as they all came over and had their pictures taken beside the car.
Some of you might be a little unfamiliar with the 718 designation, which means this Cayman is powered by a 2 litre flat or boxer engine with a turbo to give it more power that the old flat six-cylinder it replaced. This base model Porsche produces a very robust 300 horsepower giving it 0 to 100kph time of 5.1 seconds, which is pretty good for a car that weighs 1,335 kg. My test car was equipped with the six-speed manual, which as you would expect from Porsche, is firm but easy to shift. The only problem I had with the car was getting used to the clutch, which required a fair amount of slippage to get moving from a standstill. 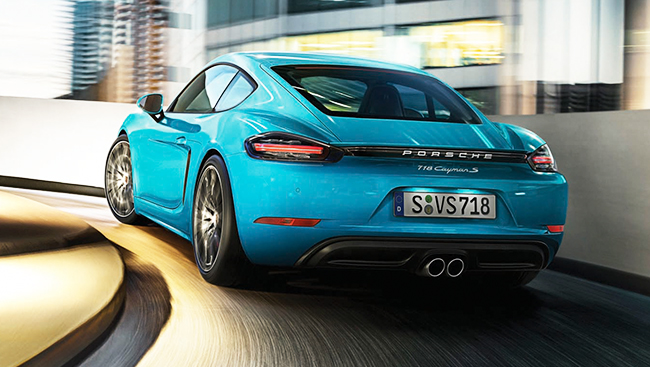 If you are new to the world of manual transmissions, I suggest trying an automatic, especially if you live on a hilly street. The automatic is the Porsche Doppelkupplung (PDK) seven-speed unit which I drove briefly and is very quick in shifting through the gears, and gets slightly better fuel consumption as well.
First off, I was generally impressed with the way the 718 manoeuvred around the city. It was nimble enough to scoot about traffic. On the road and in twisty sections especially, the mid-engine came into its own. Unlike the 911, the handling of the Cayman is much more neutral so you don’t have to worry about the rear coming around in the long sweeping bends. Putting price and prestige aside, I much prefer the handling of the 718 with its smaller and lighter mid-engine four-cylinder arrangement. 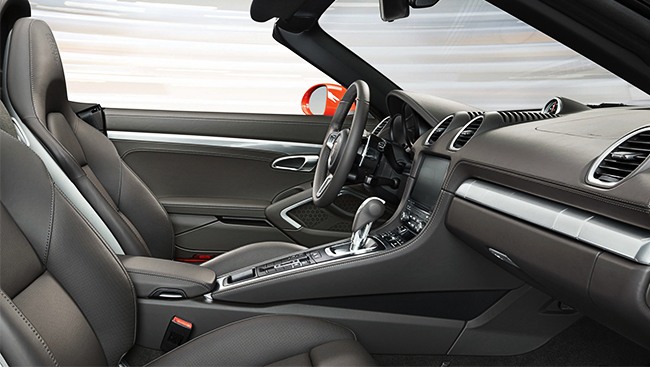 The Cayman is not for those who golf or play hockey and need to carry their gear with them, as it is not the car to load gear into. The rear cargo area is small and not deep due to the fact that the transmission is under it. The front on the other hand is not really too bad for a mid-engine car but is a little odd in shape, so soft luggage would be better suited for any trips where two people are involved.
Getting into the low slung Cayman might be a chore for the very tall. Once inside you will find a comfortable interior with everything easy to get to and reach. The tachometer, like in all Porsches, is front and centre with a digital speedometer and gear indicator. You might ask why a gear indicator. Well, the engine is quite and it is easy to forget what gear you are in. Believe me, I had to glace down on many occasions to remind myself I was in a higher gear. Design-wise, the interior is a very nice place to be in. If it were me buying I would probably opt for the sport seats as I found the lower seat cushion a little lacking in padding.
With any high-performance car like the Cayman 718, getting the car right for yourself is important, which means ordering the options that make you feel good in the car. The base price on my test vehicle was a very surprising $62,700 and my test car listed for about $73,000 with some practical and wise options.
Highlights
MSRP: Base $62,30
Horsepower: 300 at 6,500 rpm
Torque (lb-ft): 280 at 1,950 rpm
Transmission: Six-speed manual or seven-speed automatic
Fuel economy: 11 L/100 km city and 8.3 L/100 km highway
Prev Next

The CX-9 is a full seven-seater SUV that I have to say I really enjoyed driving, and I can’t say that about many of the larger SUVs I have tested in a while.

As GS 350 is a powerful car you tend to drive it a little more aggressively and that is where the AWD really comes into its own as the grip on the pavement is superb.

MINI is really a misnomer, because measuring at 4,314 millimetres in length, 1,822 millimetres in width and 1,557 millimetres in height, it’s anything but miniature. That means the 2017 model is a full 200 mm longer and 30 mm wider than before. And rare for a performance vehicle, there is loads of cargo space, depending on how the back seats are configured.

If you are a penny pincher like myself and really don’t like the fuel consumption numbers on many new vehicles, then this new Jaguar XE R-Sport Diesel might be just the car you need. At the moment, this Jag is probably one of the only diesels on the market, and I know the only luxury model car so equipped.

It has been a while since I last tested a BMW and every time I do, I am amazed at how many more advanced products have been added, and as usual I was not disappointed.