It doesn’t have any connection to the Star Trek Villain by a similar name, but the partially electric 2018 Kia Niro is nearly as forward thinking. Introduced last year, the so-called Urban Crossover Hybrid Vehicle (UCHV) doesn’t really fit into either the traditionally defined crossover or hybrid boxes, as we will explain below.

“We’re excited about the Niro,” says Orth Hedrick, vice president of product planning at Kia Motors America. “It’s fantastic – exceptional fuel economy, great looks, the usefulness and security of a compact utility and it’s fun to drive.”
The Korean automaker describes the vehicle as an “Un-Hybrid,” because it doesn’t follow the design ethos of many current competitors. Rather than a conservative approach, there are plenty of sporty touches such as short overhangs, long wheelbase, fender flares, and a big roof spoiler. A reinterpretation of chief designer Peter Schreyer’s game-changing Tiger Nose grille prominently defines the front fascia.

The Niro is also quite different than other crossovers found on the market. Its stance is low and wide, handling is car-like and appearance resembles a beefier wagon rather than a small SUV. Measuring at 4,356 millimetres in length, 1,806 in width and 1,534 in height, the size is a perfect compromise between drivability and practicality.
Inside, the layout of the dashboard is simple and intuitive with just the right amount of physical controls. The T-shaped gear lever is a little dated, but is still a far better option than being swapped for a series of transmission buttons. Neatly arranged underneath the centre stack is both an auxiliary and USB port, flanked by two 12-volt plugs. The tray below is capable of wireless charging supported devices.  Manufacturers take notice – every vehicle should have this in 2017.
The powertrain is comprised of a 1.6-litre four-cylinder Atkinson-cycle engine, an electric motor, and a 1.56-kilowatt-hour lithium-ion battery together producing a combined 139 net horsepower and 195 lb-ft of torque. Mated to a six-speed dual-clutch transmission, the Niro behaves much like an ordinary front-wheel drive car without any jerkiness caused by the kicking in of internal combustion processes under heavy
acceleration, for example during highway merges. 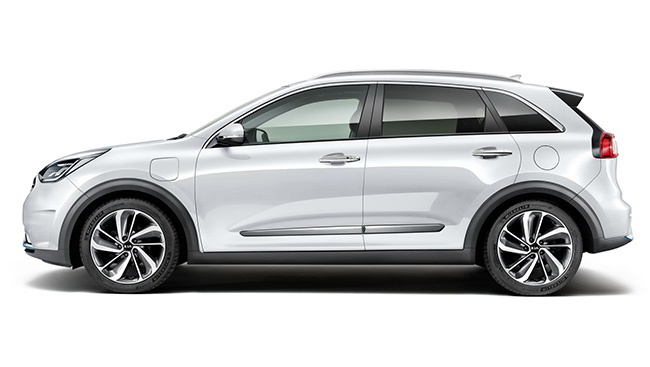 Similarly, the regenerative braking system is unobtrusive and doesn’t cause any bucking or heavy lurching while in use. I did find, however, the brakes to feel a little squishy and the stopping distance longer than some other models I’ve tested in the segment.
Performance-wise the UCHV won’t blow your socks off but is adequate. There is a Sport mode that is activated by bumping the gear lever over to the left, helping shifts engage a bit quicker and surprisingly makes the driving experience livelier and more fun.
A neat new brand feature is Eco-DAS (Driver Assistance System) with Coasting Guide and Predictive Energy Control. Talking to the on-board navigation, Eco-DAS analyzes the programmed route and coaches the driver on where to coast and brake in order to maximize fuel economy. Topological changes in the road including inclines and declines are taken into account and energy reserves are managed accordingly, again to achieve the best efficiency possible. “The Niro really does set a new standard in the market,” says Hedrick.

The way Porsche has made the car look so well-balanced with a motor and transmission sticking out the back is amazing.

The CX-9 is a full seven-seater SUV that I have to say I really enjoyed driving, and I can’t say that about many of the larger SUVs I have tested in a while.

As GS 350 is a powerful car you tend to drive it a little more aggressively and that is where the AWD really comes into its own as the grip on the pavement is superb.

MINI is really a misnomer, because measuring at 4,314 millimetres in length, 1,822 millimetres in width and 1,557 millimetres in height, it’s anything but miniature. That means the 2017 model is a full 200 mm longer and 30 mm wider than before. And rare for a performance vehicle, there is loads of cargo space, depending on how the back seats are configured.

If you are a penny pincher like myself and really don’t like the fuel consumption numbers on many new vehicles, then this new Jaguar XE R-Sport Diesel might be just the car you need. At the moment, this Jag is probably one of the only diesels on the market, and I know the only luxury model car so equipped.