Living and Breathing With Asthma

Taking a breath with ease can easily be taken for granted. But for the over three million Canadians living with asthma, breathing isn’t always as easy as it may seem.

Asthma is a long-term lung disease marked by breathing difficulties that occur when airways become inflamed and subsequently narrowed or blocked.

These symptoms can range from mild to severe and often vary among how sufferers are affected. They can appear for days on end and then disappear for just as long. Not all asthma attacks are the same; they can be unpredictable and differ each time they appear.

“Wheezing is the most specific sign of asthma in children,” says Ablog-Morrant. “In adult patients, clinical features of asthma often are similar or overlap with other respiratory conditions.”

Despite the growing number of individuals suffering from asthma and years of genetic research, the cause of asthma is still relatively undetermined. It is believed to be hereditary, triggered by the environment and a result of an impaired immune system, making it difficult to pinpoint a single cause among the large number of triggers.

“We know that there are going to be things that we can inherit from our mom or dad, but it’s really things that we’re exposed to, given our genetic makeup, that really determine whether or not we’re going to develop asthma,” explains Dr. Del Dorscheid, director of St. Paul’s Hospital’s Severe Asthma Clinic and associate professor at the University of British Columbia. “We now know that some of those things are: did your mom smoke, what was the psychological stresses of the environment that your mom and you grew up in, what were the early childhood viruses, did you live in an urban area that had certain urbanization particles? We realize now that the environmental influences are probably much larger than the genetic influences.”

Asthmatics often experience attacks in reaction to a trigger. A trigger is any condition that causes inflammation of the airways and they can be both allergic and non-allergic. “Asthma symptoms can be triggered by irritants, allergens, respiratory infections and exercise, although the common trigger in the 0-6 age group is respiratory infections,” says Ablog-Morrant. 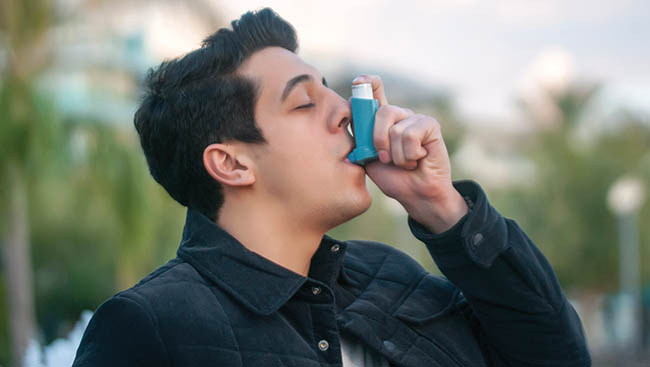 For those with asthma, knowing your individual triggers and avoiding any high risk factors is important for minimizing inflammation and reducing symptoms. Recognizing the symptoms and being thoroughly assessed by a health care professional is the first essential step to relief from and control over the disease.

“They first have to have recognition,” says Dorscheid, in regards to treating the illness. “There are a lot of children that don’t really realize why they’re not playing sports. They just get short of breathe so they’ve taught themselves not to play. In adults, that’s a bigger problem. Adults think, well I never had asthma as a child so I can’t have asthma as an adult.”

After improving the air quality in their homes, Dorscheid suggests that patients need to understand their medicinal needs. All asthmatics will need a controller medication, individually prescribed based on the severity of symptoms.

“Every asthmatic, once they have insight into what they have, what their triggers are, how then medicine can ameliorate all that, they have to know what their action plan is,” says Dorscheid.

“Asthma is a beautiful disease because it’s fully reversible, fully treatable,” explains Dorscheid. “If the patient themselves understand what it’s all about and what triggers it, and how then they can manage their medicine on a day to day basis, they should be able to do everything that a non-asthmatic can do, even in horrible pollen based seasons.”

The more attention you give asthma, the less it will take from you.

A Playground Workout For Your Inner Child

Breathe some fresh air into your fitness routine that’s not only free but fun as well &...

A Playground Workout For Your Inner Child

May is National Sunshine Month

May is National Sunshine Month

Diabetes is leading cause of non-traumatic lower limb amputations

Time to act to save limbs and improve lives.

Diabetes is leading cause of non-traumatic lower limb amputations

Diabetes increases a person’s risk for many serious complications such as heart attack, stroke, kidney failure leading to dialysis, and blindness. Nevertheless, for many people it is possible to live a healthy, full life with diabetes.

Get that Beach Body

Losing weight and toning up take time, and a lot of people make the mistake of waiting until summer is already upon them.

Get that Beach Body