History keeps a record of ‘the firsts’ – the first person to walk on the moon, the first person to climb Mt. Everest, the first person to invent electricity and so forth. So rightfully, Lieutenant Colonel Harjit Singh Sajjan’s name will be remembered in Canadian history as the first Sikh to take command of an army regiment. The extraordinary achievement of this valiant army personnel has further added glory to the nobility and valour of the Sikh community worldwide; a community identified as warriors with a generous heart.

Sajjan was born in a small town in India called Bombeli and came to Canada at the age of five. His family resided in Vancouver and it was an adventurous ride thereon that unfolded to Sajjan establishing a milestone in the Canadian and Sikh history.

Initially he planned on pursuing a career in the Air Force. “I did everything possible to learn about flying and getting my grades up and I joined the Army Reserve to get experience. I thought it would look good on my resume if I got experience.” But how did he end up in the army? “Something with the bug to be in the military," Sajjan says.

Straight after high school, Sajjan initiated his career by joining the Army Reserve in 1989. “After spending some time part-time I ended up working full-time within the army.” A few years later, Sajjan “decided to look at something else and that is when I looked at policing and I applied and I got hired by the Vancouver Police.” But he was able to hold on to his status in the military. After fulfilling his role in the Vancouver Police Department and conducting his duties during deployment in Bosnia and Afghanistan, he decided to focus solely on the military. “I resigned from the police after the third time I had to go to Afghanistan.” He mentions his father who supported him along the road but most importantly mentions his father’s advice that worked as a driving force leading to where Sajjan stands today. “His advice was really simple. You can quit, but you will always be circled as a failure wherever you go on from here if you quit now. So it is your choice.”

Sajjan says he never expected to be in combat when he first joined army, but Afghanistan, where he was deployed three times, accounts as a “humbling experience” in his life. Though he also performed his duties in Bosnia, Sajjan describes Afghanistan to be a completely different experience. Reflecting on that experience, he beautifully outlines that one should never take other people for granted, “You never know which person could be really good, just because someone is small and they may not look big, but all of a sudden they would be the greatest person you have ever met. I saw that in action.”

Sajjan strongly pressed on his ideology of holding on to your identity and dedicatedly performing duties. “You don’t just represent yourself, you represent other Sikhs around you and people count on you.” He recalls an incident while he was deployed in Afghanistan and an Afghani came up to him and said “You are Sikh and I know you have to help me if I ask you for it.” He said in combat people look at you as a Sikh, thus being a warrior.

Recently in March, Lt. Col. Sajjan was awarded the Meritorious Service Medal (Military Division) by His Excellency the Right Honourable David Johnston, Governor General and Commander-in-Chief of Canada, in Ontario.

“Major Sajjan deployed to Afghanistan as a special advisor from February to November 2009, and from November 2010 to March 2011. His approach, based on his knowledge of local culture and tribal dynamics, helped senior management to engage with influential Afghan tribal leaders, and led to the identification of insurgent command and control connection points. Taking every opportunity to deploy forward to refine his leads, Major Sajjan provided critical situational awareness and reduced the Taliban’s influence in Kandahar province through his sound analysis,” mentioned a government statement. 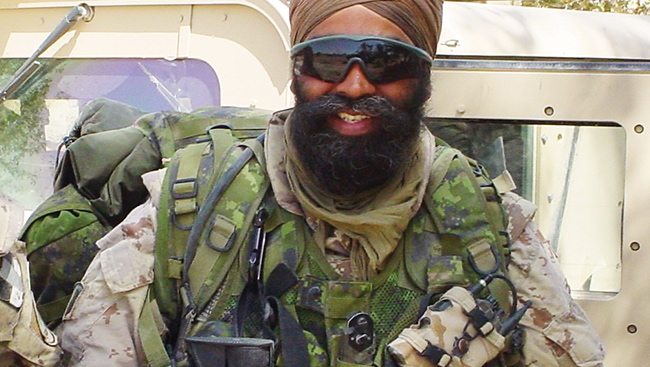 But these accomplishments were not something Sajjan achieved overnight. Sajjan tells us how being a Sikh helped him to persist his mind and body to cultivate qualities that bring together his true identity – a Sikh. “When I was younger, I used to think why do we have long hair? But when I thought about it, when you look at it from the aspect of building strength and counter adversity here is a visionary because to have long hair requires effort right? It takes effort in terms of you going swimming and doing all these other things. You have to figure out a way yourself, how you are going to do these things.” He elaborates on this saying it builds strength and endurance to go forward, “If you look at the Sikh community around the world, it is why they are succeeding, because we had already gone through these obstacles.”

Extending on that note, Sajjan tells me another interesting story. He says “Someone asked me why don’t you just cut your hair because it would be so much easier for you to wear a helmet and wear the gas mask and I said ‘Yeah it would be easier but I said if I gave this up now, how could you trust me later on? How can you trust me in combat if am willing to give up something I believe in so easily?’”

He ends the interview on a good note praising the Canadian military and delineating their professionalism. He considers himself very fortunate to be part of the Canadian military. “They look at your performance, once they realize that you can perform, for example good or better than any body else, than you get accepted very quickly.”

To this he adds the importance of women being part of the squad as well. He says, “It is not just for minorities, but for females as well. There is no debate at all for women not being in combat. I consider Canadian forces probably one of the most welcoming organizations in Canada.”

Sajjan’s achievements are a true inspiration for youth and other individuals to strive to achieve what they truly believe in. He says obstacles will be there in whatever path you choose to take but “if you pass them, it builds your confidence.”

Well who is this Sandy Sidhu? She is a bona fide breakout actress, who happens to be South Asian. Witty (if you know me – you know I appreciate this quality), easy on the eyes, grateful for every opportunity, and above all very optimistic.

Ram Gill is a living breathing example of the long time saying, “behind every man’s success there is a woman.” Although body building had always been a sport that intrigued Ram, his wife, Kuldip is the true lady luck behind his success. Fed up with Ram’s lifestyle, which consisted of mostly drinking, hanging out with friends and a little more drinking, Instead of criticizing she encouraged Ram to pursue his lifelong dream of body building.

Dave Mann, a lower mainland entrepreneur, has established a non-profit organization called Mannkind Charitable Society (MKCS). This non-profit organization’s mission is to make the world a better place. In order to transform our global societies into liveable spaces for all, MKCS is involved with helping the environment and less fortunate children around the world.

In recognition of his scholastic achievements Afraj Gill has won 16 scholarships totaling in at $100,000. This includes a prestigious Simon Fraser University Award, which alone is $34,000. In addition, he was class valedictorian and as the president of the school’s student council and president of the graduation committee, he contributed a lot. “I had responsibilities that not many kids experience.

Asa The Saga - Life of the lumber legend

Asa Singh’s life is a saga with all the ups and downs of an epic. Starting from a wage of 25 cents an hour wages, his net worth is now measured in the billions but he maintains a humble view and emphasizes that his goals are not about being “big”. Asa Singh’s inspiring life journey continues as always to motivate people of all ages and backgrounds. His name and fame travel thousands of miles a day to reach thousands of hearts on the way.