Indian Cuisine is one of the most popular cuisines across the globe. With thousands of Indian restaurants popping up across the map and more people being introduced to India’s cuisine, the appeal of curry is being compared to pizza. Indian cooking classes, culinary schools, and cookbooks are going mainstream – all due to the demand of people wanting to learn how to prepare delicious Indian meals in their own kitchen.
Growing up in a household where preparing In­dian food was part of the daily routine, no con­sideration really went into what it took to get the meal on the table. Perhaps it was because my Mom was efficient and made it all look easy. While in Canada, her meal preparation must have seemed like a breeze, especially with the technology and convenience that the Western world had to offer. Back in India, my mom used to grind flour/spices and make roti’s on a chula (coal heated stove).

Once I was old enough, I would stand in the kitchen and make honest attempts to learn how to cook. But when it came to preparing Indian food, I always left the kitchen discour­aged because there never seemed to be a rec­ipe to follow. Consequently I always ended up with a botched meal. A pinch of this and a handful of that, led to no consistency on how the meal would turn out. After many failed at­tempts, eventually I just gave up, but my desire to learn the cuisine remained.

Fast forward two decades and voilà at my fingertips, I have online recipes available and a myriad of Indian products available in the marketplace. Some of the products I could rave about and others, well let’s just say I won’t be serving those dishes at my next party. I eventu­ally found solace with the knowledge that pre­paring a delicious healthy Indian meal was not a gift you are born with. While surfing the web, I found ‘Simply Indian’ a blog written by Preena Chauhan. Chauhan is recognized as a Toronto based Indian food expert. She has appeared on the Food Network, City TV, Omni TV and SUN TV as a guest presenter. Preena honed her own Indian culinary skills from watching her mother Arvinad cook over the last 17 years and went on to create her own style of Indian cooking, which she expresses through her ‘Simply Indian’ blog.

Preena’s blog is devoted to preparing nutri­tious economical and delicious Indian meals. She takes away all subjective impressions that Indian food is unhealthy and time consuming to prepare. Preena’s blog is written based on first hand experience and refined while work­ing with her mom at Arvinda’s Healthy Gourmet Indian Cooking School. Along with many ac­colades, Preena has also co-authored and self published The Healthy Gourmet Indian Cookingcookbook. 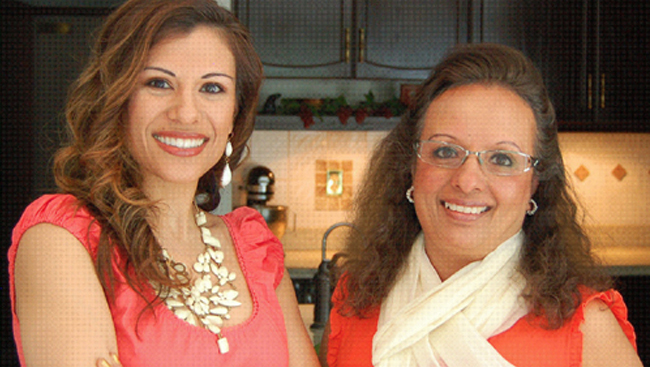 Her mother, Arvinda began her Toronto based cooking classes with a few simple in­gredients, inspiration, culinary passion and hard work. “To master the complexities of In­dian Cuisine can take a lifetime.” However, Ar­vinda shares her recipes that have been passed down from generation to generation through her cooking classes. She teaches technique, traditions and philosophy that reflect the true essence of Indian cuisine. She has also passed on to her daughter a love of Indian food and cooking – a gift that simply is beyond measure.

Absolutely, once one has a little knowledge on the foundation of Indian cooking techniques and how to use spices correctly, putting to­gether an Indian dish can be definitely easy. I encourage my students to be flexible in sub­stituting or even omitting certain ingredients to simplify both your shopping list and cook­ing steps. Additionally, some time-saving tips make Indian cooking just as easy as cooking a good pasta dish. There are a few things to keep in mind to getting results — fresh, good ingredients (including spices, which will alter results dramatically) and understanding how to balance spices.

Q2. For those that are intimidated by the cuisine, what meal is a good starting point?

As a starter dish, I always recommend Channa Masala. The ingredients are familiar, the spicing is basic and the end-result is delicious. This is always a good ‘hook’ to get someone to try an Indian dish and I always find this one is a pleas­er for beginners, children and of course, those looking to include more lentils and beans into their diet. I have a super easy recipe on our web­site: Quick & Easy Channa Masala – I can make this in 10 minutes!

Q3. What is unique about your spice blend?

Arvinda’s spice blends use premium quality, hand-selected spices. Going back to an Italian analogy, just as a fine olive oil nuances in aro­mas and flavour, the same can be said about spices. Premium grade and quality is para­mount to getting good results and we use spic­es that have intensity, allowing you to achieve complexity in an Indian dish. They are free of additives, preservatives, oils and are gluten-free and nut-free. This allows for the cook to use good quality oil (not cheap fillers), fresh in­gredients like tomatoes and onions and adjust the flavouring to suit their own palate. We use organic garlic that has spicy notes, heightening the flavour, from a farmer in Stratford, Ontario.

Q4. In your opinion, can anyone be a good cook, or is it a talent that some are just born with?

I think anyone can be a good cook! Keeping the ingredients simple and fresh makes cook­ing approachable and simple. I think positive energy is important however. If you’re passion­ate about food and cook with happy spirits the food tastes really great. If frustrated or frazzled when cooking then it really reflects in the end-result – I know this by experience. So good en­thusiasm and a little fun in the kitchen never hurts.

Q5. What are some of the basic spices and why are they good for you?

Turmeric is India’s super-spice with loads of me­dicinal benefits — it’s an antioxidant, purifies the blood, aids in digestion..the list goes on. I love turmeric for its medicinal value. Chili pow­der is anti-bacterial and increases metabolism. Cloves act as an antiseptic and cinnamon fights Alzheimer’s disease. Each spice has a multitude of medicinal properties and my mother always says, when you’re eating a curry you’re healing yourself inside-out.

Q6. Talk a little bit about regional cooking and what some of the areas have to offer?

With India being home to people spanning from different religions and cultures has giv­en Indian cuisine so much diversity. Addition­ally, geographically Indian being a vast sub-continent has different geographical features and temperatures also influences the cuisine immensely. South Indian cuisine which is get­ting more popular, is on the coastal region, thus will include lots of seafood. Northern India is the wheat-growing region, so you’ll find more flatbreads including paranthas and Naan, than in the south where rice is more prevalent. Cen­tral-western region is home to pure vegetar­ians where over 60 varieties of lentils and beans are the main protein source in countless num­bers of dishes or curries. Indian cuisine offers so much diversity which is just being discovered in the mainstream now. Cooking techniques, spice combinations (masalas) and ingredients will differ from region-to-region.

Well who is this Sandy Sidhu? She is a bona fide breakout actress, who happens to be South Asian. Witty (if you know me – you know I appreciate this quality), easy on the eyes, grateful for every opportunity, and above all very optimistic.

Ram Gill is a living breathing example of the long time saying, “behind every man’s success there is a woman.” Although body building had always been a sport that intrigued Ram, his wife, Kuldip is the true lady luck behind his success. Fed up with Ram’s lifestyle, which consisted of mostly drinking, hanging out with friends and a little more drinking, Instead of criticizing she encouraged Ram to pursue his lifelong dream of body building.

Dave Mann, a lower mainland entrepreneur, has established a non-profit organization called Mannkind Charitable Society (MKCS). This non-profit organization’s mission is to make the world a better place. In order to transform our global societies into liveable spaces for all, MKCS is involved with helping the environment and less fortunate children around the world.

In recognition of his scholastic achievements Afraj Gill has won 16 scholarships totaling in at $100,000. This includes a prestigious Simon Fraser University Award, which alone is $34,000. In addition, he was class valedictorian and as the president of the school’s student council and president of the graduation committee, he contributed a lot. “I had responsibilities that not many kids experience.