Named one of Hello! Canada Magazine’s ’50 Most Beautiful People’ in 2014, Sangita Patel has become a familiar face on Canada’s leading entertainment show, Entertainment Tonight Canada. This former engineer gives us the scoop on her rise through the media ranks and her exciting career reporting on some of the biggest stars in Hollywood.

For film fans, a new year means one thing: awards season. With highly anticipated events like the Golden Globes and Academy Awards looming near, many of us are already looking forward to camping out in front of the TV with our friends and family – and lots of popcorn. While we predict the winners, keep an eye out for our favourite stars, and discuss whose outfit is most flattering, Entertainment Reporter Sangita Patel will be one of the many working the red carpet, trying to get exclusive interviews with some of the biggest names in Hollywood.

“I’m looking forward to talking to Julianne Moore; I’ve been following her career since last year. I am so excited to see her on the carpet for Golden Globes,” says Patel, who is currently a reporter for Canada’s top entertainment show, Entertainment Tonight (ET) Canada. This will be Patel’s second time at the Golden Globes and she is more than ready to push her way through the swarms of other reporters present and get her red-carpet interviews. “I’m very aggressive,” Patel says, and shares some sneaky manoeuvres she uses to pull the stars aside for an interview. “I’ll say, ‘there is something on your dress! And they (the stars) will look at it. And I say, ‘here, I’ll show it to you’ but there’s nothing on the dress. I’m one of those people,” she laughs. 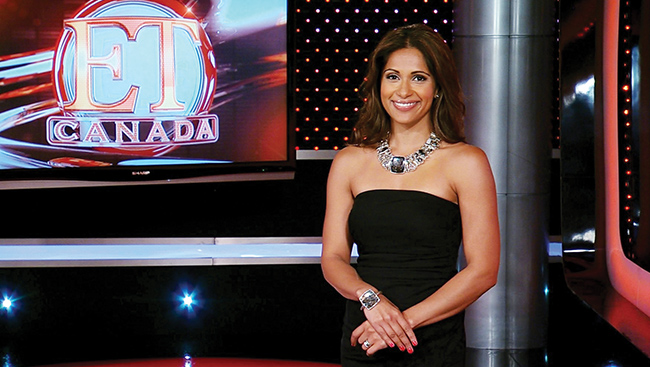 If you watch ET Canada on a regular basis, chances are you already know – and adore – Patel. This native of Toronto, Ontario, joined ET Canada in early 2013, filling in for co-host Cheryl Hickey, who was on maternity leave at the time. Whether she’s on the red carpet or doing a sit-down interview, Patel’s vivacious, upbeat energy infuses everything she does. This makes her a delight to watch on screen, especially when she’s chatting with celebrities like Robert Pattinson or the cast of the Hunger Games.  “When I’m in front of a camera, I forget there is a camera there. There is something about it that I absolutely love,” she says.

Her passion for what she does is evident. Watching her on-screen, it’s hard to believe that Patel originally was a professional engineer before she landed on the small screen. “I was bit of a nerd,” she says, and mentions that math and science were her favourite subjects in school. When the time came to apply to universities, Patel applied for engineering and journalism, and got accepted in both programs. “It really came down to what was the smart move, you know, most of the time in the Asian world, you are a doctor or an engineer,” Patel says. “So I talked to my dad and I really tried to figure out where was I going to make a good financial decision and that was engineering.” After graduating with a degree in electrical engineering, Patel worked in the manufacturing industry and earned her Professional Engineering Designation.

“But I wasn’t really happy, my passion was always television,” Patel admits.

So she decided to volunteer for Rogers Community TV and soon began working on a lifestyle program called Toronto Living and Rushes, a highlight show for the Toronto International Film Festival.

Working as an engineer by day and TV reporter at night, Patel led this double life until she was offered a job she couldn’t refuse – a weather presenter on the Weather Network. “It was a perfect job for me; it was science, math and television... It was also a great starting point for me; it really was a stepping stone for doing live television.” The six-minute weather broadcasts were unscripted, Patel explains, and this helped her get comfortable ad-libbing on live television. Her stint on the Weather Network got her recruited by City TV, and for the next five years, Patel tried her hand at everything. 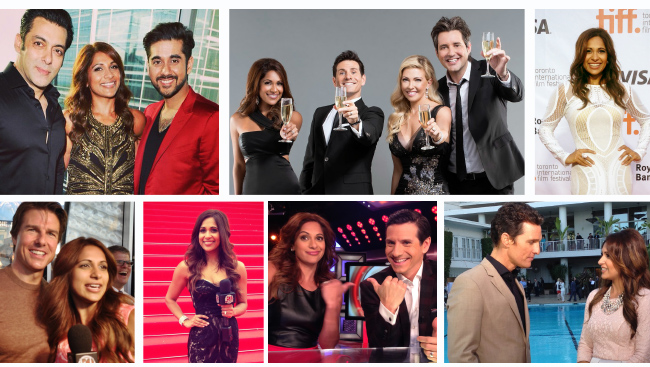 Besides the weather, she covered entertainment stories and made occasional appearances on the popular morning news show, Breakfast Television.

So how did Patel land a coveted gig on ET Canada? After hearing of a temporary position on the show, she decided to give it a shot and go for an audition. “It was a risk right, you’re leaving your job for six months [of] work somewhere else...and I took the risk,” she says.

It certainly paid off as they decided to keep her on the show permanently. Almost two years have passed since then and Patel is thrilled to be a part of the popular national show. She adds, “I have to say, being a South Asian face on a national show really got recognised.

People emailed me, I’m very active on social media and they were like ‘wow, there is a brown girl on television.’ You know, I never thought of myself as a minority, or as a person of colour, I am just who I am. I never thought about it until I was on ET Canada. That is when I started acknowledging that people do look at who is on television, in terms of colour, they have a connection to that and I appreciate that. It’s an honour to represent the [South Asian] community on a show like this and I’m so honoured that they kept me on the show!”

As an entertainment reporter, Patel spends most of her time covering movie premiers, giving viewers a behind-the-scenes look into glamorous events like the Cannes Film Festival and of course, interviewing Hollywood celebrities. She cites her interview with George Clooney as her most memorable celebrity interview. “It was epic for me because he made me coffee,” she laughs. “He’s standing there, making his own coffee, and he goes, ‘do you want one?’ He’s so nice, and just an incredible guy.” She also mentions that it’s always a pleasure to interview Mark Walberg. “Every time I see him, he is so genuine, and he’s always willing to chat, so it’s such a great feeling that he is comfortable talking to me.” Patel is also a part of a popular running series called Adrenaline Rush on ET Canada. “I take a star and we do something crazy,” she explains. “It really shows the personality of the actor and they get out of their shell!” Some of her memorable moments include walking on the edge of the CN Tower with Maze Runner actress, Kaya Scodleraio and bungee jumping from a 153-foot drop with former CFL-er Sebastion Clovis.

The key to Patel’s success was hard work and a lot of perseverance. “I volunteered for years in television until I got my start at the Weather Network,” she says. “You got to be patient; you got to get out there with a camera and practice.” In an extremely competitive industry like journalism, aspiring journalists should seize any opportunity they can to get their foot in the door, Patel advises. “Sports is an amazing place for women, that’s where you should go, I say! There’s a good chance of you getting in and you grow from it.” 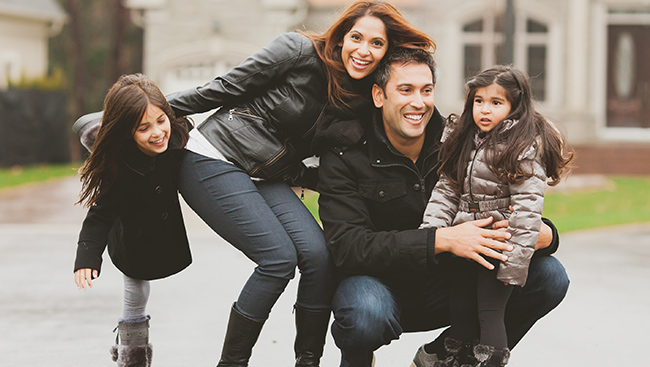 When she’s not working, Patel spends most of her time with her husband of 11 years and two young daughters. With a job that racks up air miles, it is challenging to balance work and family life but Patel seems to make it work. She credits her husband’s support as one of the main reasons why. “My husband, who is my best friend, is the best father ever. He takes care of them when I’m away,” she says. Skyping also helps as Patel is able to sing her daughters their bedtime song when she’s away. “I also take vacations. If I work on the weekends, I try to take days off during the week. So it’s not easy, but there is a great balance for it,” she explains. “I am very blessed that everything is working out – knock on wood – my kids are great and life is good.”

With her media career on the rise, what’s next for Patel? Well, at the moment, she is extremely happy with where she is. But she does have an idea of what she’d like her future to hold. Drawing on her passion for interviewing and chatting with people, Patel hopes to have her own talk show some day. “I kind of want to open that door where I can be a South Asian person and be someone people can turn to,” she says, adding that it would be one of those fun, lively shows where nothing is scripted and the goal is to make people laugh. “That’s why I got into television, you know. I always look into the camera and think I’m talking to one person, and that one person has to laugh. At one point, that person has to laugh.”

You can catch Patel on ET Canada, weeknights at 7:30pm on Global.