2016 was a year where we saw him take up important issues affecting the country and its people and bravely and fairly finding measures to tackle them. Personally, Minister Sajjan calls his experience of 2016 as “humbling and a privilege.”

Defence Minister Harjit Sajjan is a newsmaker in many ways – as the first Sikh to lead Canada’s defence system, as the first South Asian in Canada to be honoured with this title or as the first Sikh-Canadian to command a Canadian army reserve regiment.
2016 was a year where we saw him take up important issues affecting the country and its people and bravely and fairly finding measures to tackle them. Personally, Minister Sajjan calls his experience of 2016 as “humbling and a privilege.” In simple words, he finds it an honour to be part of a government that works for its people, “a government that wants to look after the younger generation, wants to look after people who are getting into middle class, and wants to get them to succeed,” he says praising the system he is part of.
As we delve into his role as the Minister of National Defence, his tone takes up a serious note. “I’m very proud of Canada’s accomplishments and what we have done but at the same I realize there’s a lot to do and it’s something you can’t do alone,” he shares while picturing a 2017 filled with challenges and responsibilities, “You have to be able to work with your allies and I’m looking forward to dealing with a lot of challenges as part of the team and trying to be that responsible partner in the world and making a difference in the world.” 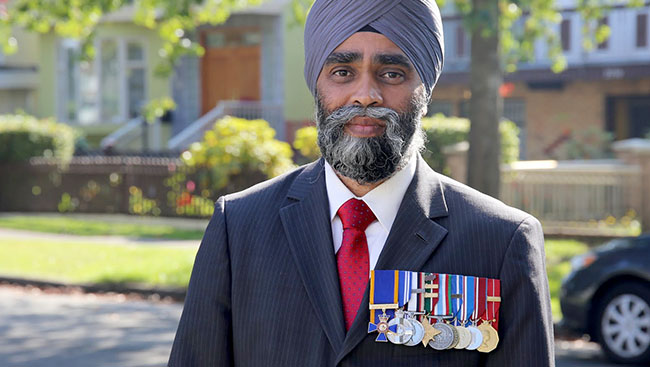 Last year, Minister Sajjan’s role got him experiencing a lot of first-time moments; he narrates one among those many that made a lasting impression. “I go to NATO quite often for meetings as a Defence Minister but then we have the Leader Summit where it’s the Prime Minister’s precedence and I get to sit next to him at that meeting. But when he’s not there, somebody sits in his spot – and he (PM Justin Trudeau) had to go for an interview and I was sitting there in his position. I’ve represented Canada in many places but I was representing him. [Later] Prime Minister turns to me and says ‘you realize this is probably the first time we had somebody with a turban representing a nation at NATO.’ It kind of dawned on all of us. To me that was a very proud and humbling moment to be there in that [moment] because we all come from very humble backgrounds.”
As he goes about having conversations with various countries and leaders all around the world, his kind demeanour, positive attitude, and willpower to do what’s best for the country has made Minister Sajjan a role model among youngsters and adults alike. Yet in a surprising way, he finds inspiration in the younger generation to take better decisions. “When I talk to them [young generation] and people come up to me and ask me for advice, I know they see me in a certain position but I don’t see myself that way,” he shares. “So when I get asked, I have to be that person to motivate them because if they don’t see the confidence in me, how are they going to have the confidence to do things?”

For 2017, the outspoken minister has major plans for the country and his cabinet. “I’m engaging in the world where we can come up with frank conversations about what’s happening around the world and tangible things that we actually need to do and working in a multilateral environment, whether its NATO, United Nations, or coalition partners and dealing with direct threats which we have to.”
He also intends on finding solutions to the threats the country and the world around faces. “A big focus for me is solidifying the direct fight where we can contribute as a nation. Also start focusing at looking at the root cause to conflict and how do we deescalate the situations and prevent situations from becoming full blown conflicts,” he elaborates. In conclusion, he asserts, “We have a responsibility as a government to look at trying to reduce conflict as well and we have a responsibility as Canadians.”

What does success mean to you?
Success to me is when we have had an impact on the younger generation. That we have inspired them, that we have motivated them to wanting to go beyond, not just to succeed but wanting to make an impact on the world. To me my success is going to be defined by the success of the next generation, what are we doing to set them up for success… that’s how I define my success.
What is your advice for youth?
Regardless of what you want to do answer the question why you want to do it because if you answer the question why you need to do something, you’ll automatically achieve it. It’s not about having a recipe to success… to succeed you need to answer the question why you need to succeed. If you answer the question why it’s important for you to succeed, success will be guaranteed. The other added personal trait to me that’s very important is having confidence and you have to feel it inside you. If you feel confident inside you, other people will look at you and be attracted by that confidence. It’s something like ‘I really don’t know what you just said, but you just said it in a confident way and I’m just going to trust you because you’re going to make it happen.’ When I feel confident inside, I’m very confident in knowing that I can achieve it. Sometimes I don’t know how but I know why I need it and I know that in time I will figure out how we’re going to do it. And if I can’t, I’ll find the person who is going to show us how to get it done.
Prev Next