Gloving – a modern dance form which involves the use of fingertip LED lights to accentuate hand and digit movement – is slowly catching the eye of young dancers and attracting interest. Though a dance form that has been around since the 2000s, not many are aware of gloving or have seen performances of it.

Alexander B, associate community manager at Emazing Lights, defines gloving as “a hobby that nobody ever took seriously which exploded into something much larger than anybody expected it to.” Emazing Lights is a California-based retail company best known for its light show gloves. The company, which started in 2010, is pioneering the new Gloving Movement into a skillful expression of art.

Though the origin of the dance form is unclear, Alexander states it may have started in the 1900s. “It was definitely rooted in the good dance that was popular back then.” The passionate glover further narrates that in early 2000 people started putting small lights from department stores into their gloves and began playing with it. “The only real beginning we have on record of gloving is a video from 2006. That’s when the online community started getting together.”

Alexander, who also goes by the name Cypher, has been a glover for five years. He started out as a kid in high school. He came across gloving while witnessing somebody else doing it at a rave party. “I found it cool. I looked it up and found live videos of people practising and doing cool things with it. I got myself my first pair of gloves, and started practising with a friend,” he recalls.

Gloving, also known as light shows, is now slowly gaining popularity at rave parties and at dance shows and competitions like BOSS and International Gloving Championship. Alexander agrees, “It has definitely been a strange growth since the last couple of years. There are dedicated kids in school and otherwise that are practising and creating moves, and are really defining the sport themselves.” 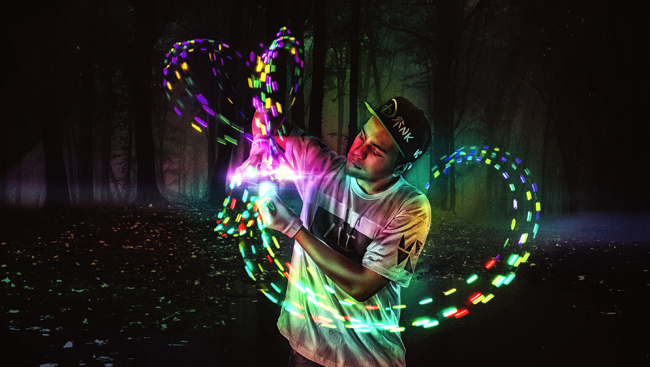 Alexander Balladares, who also goes by the name Cypher, has been a glover for five years.

One will be surprised to know that gloving also has medical benefits. Kids suffering from depression or physical disabilities are able to function, grow and get better with the help of gloving. Emazing Lights started a program called Glove4Glove to find glovers with medical issues and ask them how the dance form has helped them – to spread the word of medical benefits of gloving. They found many youngsters who have benefited greatly from gloving.

Alexander shares the story of Mathew Fernandez, a wheelchair-bound youngster suffering from a condition called cerebral palsy, whose motor skills started improving with the help of gloving. “Medical doctors said that because of gloving his motor ability had increased, his strength had increased, his muscles were rebuilding. We had no idea that gloving can have medical benefits at that time,” explains Alexander.

Glove4Glove, now a nonprofit organization after being inspired by Mathew, gives away gloves to disabled festival fans.

Emazing Lights is exploring other conditions like Alzheimer’s disease and trying to figure out what gloving can do and the medical benefits behind it. “So far it seems very positive and a lot of medical professionals are willing to work with us to get more help,” says Alexander, adding that even older adults are practising gloving trying to better their hand strengths or fixing their arthritis.

“Gloving has something for everybody, anybody can be a glover. It’s very much for the community and I think the world is about to see how deep this is,” says Alexandersumming up.