The skilled hockey player is the captain of Delta Ice Hawks and diligently led the team to winning the Pacific Junior Hockey League (PJHL) Championship.

Though just 20 years old, Gary Dhaliwal already understands what it takes to be a good captain. The skilled hockey player is the captain of Delta Ice Hawks and diligently led the team to winning the Pacific Junior Hockey League (PJHL) Championship. 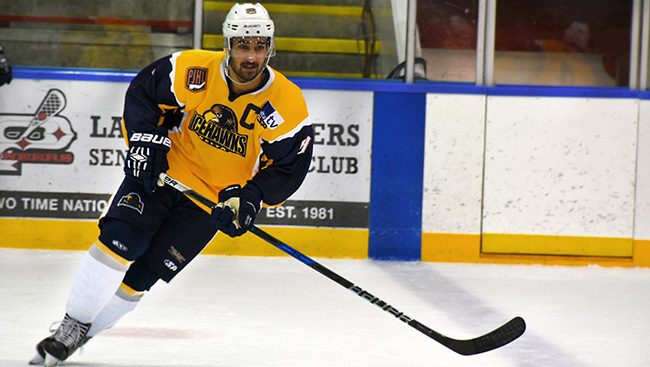 This season, Dhaliwal amassed 18 goals and 35 assists, placing him seventh in league scoring. He finished second on the team in goals, assists, points and penalty minutes while also leading the team with nine powerplay assists and six game-winning goals.
In the playoffs, the talented captain had the third highest point total in the league while scoring 10 goals – the most for any player in the playoffs. He truly shined on special teams as Dhaliwal was able to score three powerplay goals and three short-handed goals. He had four goals and four assists in the championship round and also led the league with three game-winning goals in the playoffs. 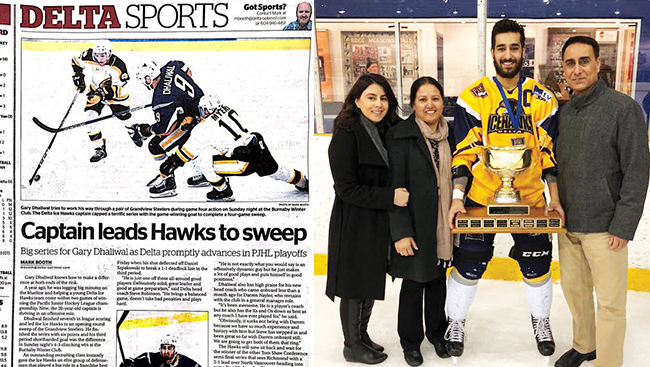 Since a young age, Dhaliwal loved watching hockey. However, a career in ice hockey would not have been possible without the support of his parents who encouraged him to play the sport he loved. “My parents were very supportive. They were new immigrants so they were new to the game of hockey. But they let me follow my dreams and I can’t thank them enough for what they have done for me,” he shares.
The two-way player grew up watching the Canucks and idolized star player Markus Naslund. But when he started playing hockey, he chose to emulate a different player. “I look to model my game after Jonathan Toews. He is a great two-way center and also a strong team leader. His level of play on offense and defense is something I hope to bring to my game whenever I step onto the ice,” states Dhaliwal. 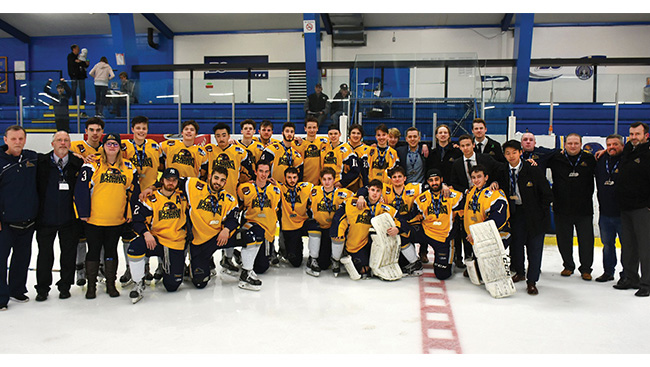 After playing junior for a few years, Dhaliwal was made captain for the Delta Ice Hawks team. “I was one of the few older players on the team as we had the youngest team in the league. It was just natural for me to be a leader for this team. I felt very confident and comfortable in this role and I’m happy that I was able to deliver with a championship for my great teammates and coaches,” says the team’s leader proudly.
The PJHL Championship win was very important for the Delta Ice Hawks. In 2017, they lost in the finals in game 6 but the hardworking team managed to rebound and prevail this season. Commenting on last year’s defeat, Dhaliwal says, “It was very devastating for everyone. But our returning players used this as motivation to win it this year. Our goal from the beginning was to win it and we dominated the season and playoffs. We had a chip on our shoulders which fueled the fire for this season.” 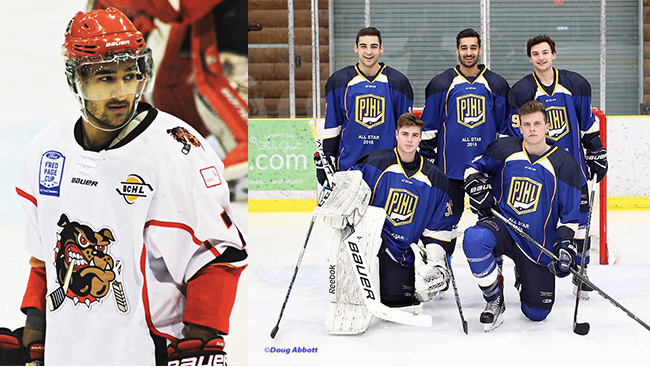 Currently, Dhaliwal is working with his family’s real estate development company as well as his family business at Real Lighting & Fireplaces. He is also enrolled in the Urban Land Economics Program at the University of British Columbia.
Looking ahead to the future, the hockey star has different options to pursue. As of now, he has several offers to play hockey at National Collegiate Athletic Association (NCAA) schools as well as an offer from Simon Fraser University in BC. He alsowants to maintain his involvement in the sport by coaching hockey at the junior or midget level. Dhaliwal’s long-term focus is to stay close to the game of hockey while expanding his family businesses. If his hockey career is any indication, he will thrive with increased responsibility and
enjoy a successful future.
PHOTOS: Courtesy of GARY DHALIWAL, DELTA ICE HAWKS/ Facebook, Doug Abbott

With the support and participation of a group of girls from Ladakh, a small rural village in northern India, hockey legend Hayley Wickenheiser, is on a mission to train these budding players in ice hockey and promote women empowerment through the sport.

Eric Basran is an 18-year-old Team Canada boxer, who despite his young age has already proved his capabilities to the world.

Satnam was born in Ballo Ke in Punjab – a small village with a population of about 800. At a young age, he decided to pursue basketball and enrolled in a sports academy in Ludhiana.