By Shanel Khaliq, 17 May, 2015 03:44 PM
Sahil Sandhu, midfielder for Vancouver Whitecaps FC, has an easy-going persona, but not when it comes to soccer. He is fiercely passionate about the game and hopes to make it to the Major League Soccer (MLS) soon.
Sandhu was born in Amritsar, India, and moved to the Lower Mainland as a child. The eldest of three siblings, he attended Princess Margaret Secondary School up until Grade 11, after which he moved to Burnaby Central Secondary School to be a part of the Whitecaps Residency Program, when it started in 2008.
The struggle to become a soccer player started early, admits Sandhu. “I was really into soccer, so I had to sacrifice much of my social life, which didn’t feel right at the time, but I was willing to give it all up to stay focused on my main goal.”
Sandhu started playing soccer at the age of ten. His journey towards becoming a soccer player began with Pegasus Football Club in Surrey. “Pegasus was like family to me. I made my debut for them when I was 17, and have been with them ever since,” says Sandhu. Over the years, he has developed strong ties with his team mates, and feels blessed to be a part
of the team. 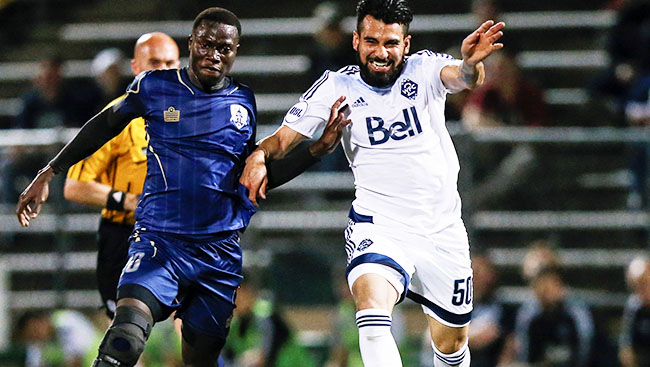 Though he always knew that he had potential for the game, it was when he made it to the Whitecaps Under-13 Team that his dream began to turn into reality. Since that day he has been playing for the Whitecaps, as well as BC’s provincial teams.
Contrary to most people’s opinion, Sandhu feels that it is not as difficult for a young player to land a professional contract. Rather, he feels that the challenge begins when you reach that place. “Everyone can land their first pro contract, it is the next thing that is hard – to stay on top and not lose focus. Players usually feel that since they got a professional contract, they can take their foot off the paddle a little bit. I can promise you that you won’t land another contract once it gets to your head,” he says.
The midfielder feels humbled to have achieved so much already, but states that it also keeps him grounded, and he does not lose focus from his bigger goal – playing in MLS. For now, he hopes to play a good United Soccer League (USL) season and wants his game to be recognized more.
Sandhu has just returned with his team from California, where the WFC2 was playing in the United Soccer League (USL). Unfortunately, they lost both games, but he feels that the team gained experience. “It is going to take time, but we are moving in the right direction.”
Though he is living his dream, Sandhu is extremely cautious about not letting this success get to his head. He acknowledges his family’s support for being the single most important factor contributing to his achievements and success so far. “My family is very supportive; they always wanted me to be happy – and that meant playing soccer professionally. My dad has always been by my side, taking me to practices all the way to either the University of British Columbia or Simon Fraser University; and of course my mom, who would love making meals for me when I would come home tired from practice. Without their support, I couldn’t have done it.”
Prev Next

Atwal was drafted into the Western Hockey League (WHL) by the Prince Albert Raiders in 2010 during the Bantam draft at the age of 14.

DARPAN had the chance to speak with Alexander Edler about the current season, how he stays calm and his career-long tenure with the Canucks.

2013 was a breakout season for Teibert, as he started 19 games out of 24, scored two goals and recorded a team high of nine assists, tying the club record in MLS play.

This Surrey native has been playing hockey since the age of seven, and he was recently drafted by the Edmonton Oilers as the 63rd overall pick during the 2012 NHL Draft in Pittsburgh – a dream coming to fruition for the Khaira family.