DARPAN had the chance to speak with Edler about the current season, how he stays calm and his career-long tenure with the Canucks.

With over half the National Hockey League season come and gone and the playoffs quickly approaching, the Vancouver Canucks are in a better position than they were this time last year – much to the relief of the team, management and many fans who needed their faith in the team restored.

While there is still plenty of hockey left to be played before the season is deemed a success, Vancouver has worked hard for their wins and currently holds one of the last highly coveted playoff spots. It's been a year of change for the Canucks and it may be just what was needed to help bring them back to victorious times. However, despite the team's transformation, some things have remained the same...or even become a bit better. Alexander Edler is one such thing – a player who has continuously upped his game even when the times got tough.

DARPAN had the chance to speak with Edler about the current season, how he stays calm and his career-long tenure with the Canucks.

Drafted 91st overall by Vancouver after impressing the team's head scout with his play in Sweden, Edler made his NHL debut on November 3, 2006 following short stints with both the Kelowna Rockets and Manitoba Moose.

Returning the following season as a full-time member of the team and holding his place in the lineup ever since, Edler has provided the Canucks with a solid presence on the blue line, an
offensive approach to defence and one of the team's hardest slapshots.

Besides his skills on the ice, Edler has often been complimented for his calm demeanour, both on and off the ice. “I think that's just the way I am,” he says about staying focused in the midst of daily scrutiny. “I don't try to get too rattled about things. Nothing good is going to come out of it. It would be to my advantage to stay calm and focused and just concentrate on the task.”

And it has been to his advantage. Edler has a confidence with the puck that has made him the highest scoring defenceman on the team this season. While it could be argued that his stats aren't that impressive this year compared to prior 40+ point seasons he's had, Edler has consistently stepped up when called upon, proving he's the strong defenceman fans have come to know. Complimented well by Chris Tanev on the blue line, Edler has been able to bounce back from a rough 2013-2014 season and become perhaps one of the most reliable players in blue, green and white. 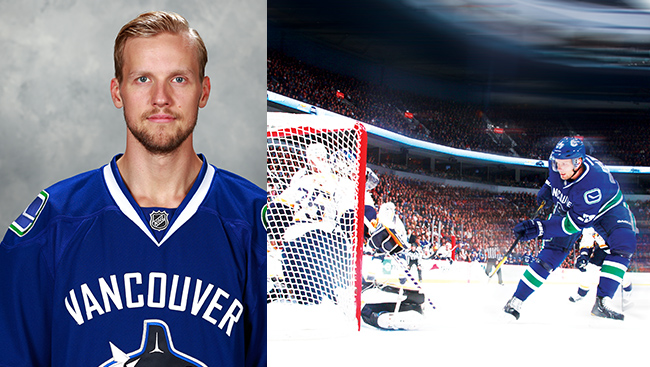 But is it enough? The Canucks certainly have a challenge ahead of themselves, one that Edler thinks they're up for as long as they stick to their systems.

“We just have to work on own game here as a team. Everyone obviously has to,” he says, not singling anyone out but holding himself accountable
as well. “You can always work on your game individually but just working as a team – we know that when we're successful is when we play good
together, all five guys on the ice. And it takes all of us to be successful so I think that's the number one thing [the Canucks need to do to make it to the playoffs].”

“It's a lot of new things - from management to coaches to players,” Edler said when asked about how this year has felt different than the last. He can't help but remember how the season ended last year but, with the way the first half of the season has played out, he's hopefully optimistic. “The core is still here but I think it's been pretty good so far.”

Hailing from Sweden but spending the majority of his years with the Canucks in Canada since he was a teen, Edler was quick to respond when asked if Vancouver feels like home. “Absolutely,” he says, without hesitation. “It feels like home, for sure. I really like it here. Obviously, Sweden is home, too, so I get to have two homes. But I feel like I've really settled down here and I like this city. I've obviously been here for a while now, so yeah, it feels like home.”

Approaching a decade as a member of the Canucks is quite the accomplishment and one that Edler can't believe himself.

“It's a long time,” he laughs, reminiscing about the almost ten years he's spent on the roster. “I've been here for a while and it's going by pretty fast. I feel like I was the youngest guy here for a lot of years and then, all of a sudden, a veteran one year. Obviously, it's different from being a rookie to being more of an 'older guy'. You want to make sure that your team is doing good and you do everything you can to help the team play good. And if anyone else needs help, you have to be there.”

He knows his role and he plays it well. He's been around through many changes, both good and bad, and has continued to remain an essential part of the team's success. Edler's calm confidence and strong presence have provided stability and assurance through turbulence and transitions. Overshadowed and perhaps understated, it's clear he's in it to defend to the end.

2013 was a breakout season for Teibert, as he started 19 games out of 24, scored two goals and recorded a team high of nine assists, tying the club record in MLS play.

This Surrey native has been playing hockey since the age of seven, and he was recently drafted by the Edmonton Oilers as the 63rd overall pick during the 2012 NHL Draft in Pittsburgh – a dream coming to fruition for the Khaira family.

After speaking with him about his unconventional journey to becoming the captain of Canada’s cricket team, it became quite apparent why this very affable 26-year-old has been creating a stir on the Canadian cricket scene