It is our minds that govern who we are, and help us establish a destiny for ourselves. Our mental self, is the most important self, or how Gurdarshan (Gary) “Saint Lion” Mangat puts it, “Don’t become a product of the environment, become a product of yourself.” Great words of wisdom from a young man. Gary, as he likes to be referred to as, went from being an underdog to a feather weight champion. He lives his life remembering and acknowledging Sikh warriors and ancestors within his heart and keeping their names alive while entering the cage. Kneeling down and praying to the higher power, before performing his physical, yet mental art.

During my short interview with Gary, I learned a great deal about the sport of MMA. I have to admit, I had many misconceptions about the sport and quickly found out it is not about testosterone, aggression, and brute strength, but a mental sport, or how Gary puts it “A Human Chess Match.” Gary noted several times, “When you enter the cage, your mind must be clear, all emotions and attachments must be left behind. The brain is a superior muscle being put into play, in cohesion with the body when trying to win over your advesary.”

I was impressed by the way Gary carries himself. He is without ego, humble and down-to-earth. One thing is clear; Gary never forgets who he is, and where he has come from. He spoke about how many individuals perceive his sport as a ‘blood bath’ or ‘a pure macho testosterone driven wrestling match’; however, these are just fabricated images of Mix Martial Arts (MMA). MMA is more of an art then a sport; it can be compared to drawing and painting. Physical and mental techniques are core components necessary to Mixed Martial Arts or participate in any form of organized sport. He went against the negative attitudes of jealousy, hate, peer pressure thrown at him by the greater masses, and showcased how pessimistic perceptions could not deter his pursuit. Furthermore his physical transformation into a Mixed Martial Arts mastermind helped build confidence and enabled him to put to good use any ill feelings that every younger person experiences. accomplish, Mangat was faced with many individuals who believed that he was inferior and could not fully endurance, and stamina helped him become who he is today. During his childhood, Gary started his career as a Mixed Martial artist at the age of 21, which some say is a late age. He had no previous wrestling or martial arts training; however his mental strength, 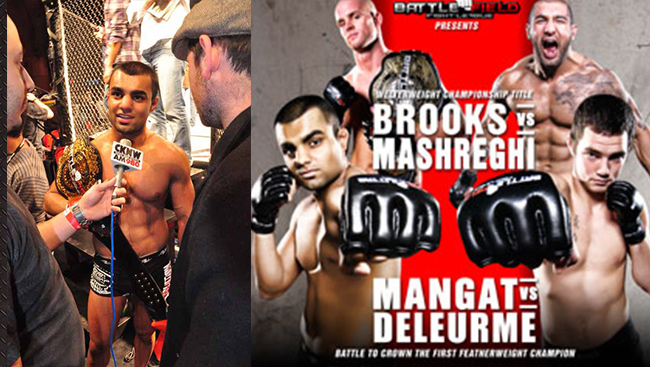 Born and raised in Williams Lake, Gary moved to Surrey immediately after graduating high school with a scholarship that would enable him to become a Certified General Accountant. He had always wanted to be successful in organized sports, but because of negative body image fears and lack of acceptance, Gary never really fully pursued anything. Gary notes, “It was through coasting through life that I managed to get myself into mixed martial arts.” So just as he had put his focus into academics, Gary put his no-fail attitude into the art of MMA. His account of his approach made me think of a Japanese proverb, “Fall down seven times, get up eight.” This proverb completely describes his no fail approach. When he first started out, he would lose many fights; however to increase his skills he would study UFC matches, and mentally adjusted his techniques. Mangat stated that he is a “visual learner,” which has much to do with his current success.

Nevertheless, Gary stated, “He never gave up until his punches and kicks were perfect.” January 15, 2011 at River Rock Casino in Richmond, Gary ‘Saint Lion’ Mangat won the feather weight title. What does his win represent? Well this means, Gary or rather ‘Saint Lion’ is a contender for the Ultimate Fighting Championship or more aptly known as UFC. Mangat is now a household name within British Columbia, especially since he is the first South Asian Canadian in the world of Mixed Martial Arts. I spoke to Gary about his feelings toward being considered a celebrity he blushed and was modest about his new title. He noted he is gaining recognition from many wrestling clubs throughout BC and gaining a ‘somewhat’ following from the South Asian community.

Gary states that it is difficult for him to fathom his newly acclaimed fame, especially since he has lived most of his life being an underdog. This notion of being an underdog is an integral part of Gary. He notes that he spent much of his teenage life with an underdog stigma, which is ‘all of the sudden’ changing because of his highly acclaimed success. Reading between the lines, I denote that he will forever keep that stigma within his mind. It appears it is a motivator – a way for him to consciously remind himself he can do better. South Asians and non-South Asians alike see him on the streets and shake his hand congratulating him on the great achievements he has made. He has become a role model of sorts for the young and win a title in a UFC cage match.

Besides training and working hard for his upcoming fight, ‘Saint Lion’ is a perfect role model for the younger generation. He has given back to his community of Williams Lake by visiting his old high school and having talks with the 2000 to 3000 kids. Gary stated that he mostly enjoys talking to anyone who resembles being an underdog and showing them that “Yes” they too can channel any negativity into something positive. Gary shows a stunning example of how a young insecure teenager, can be transformed into a strong willed person that can triumph all obstacles standing in their way. Gary has repeatedly mentioned the importance of the mind. “It’s the mind which controls our actions, and controls how people perceive us.”

He presents an example that if an individual sees themselves as an inferior being, therefore they will become that inferior being. In contrast if an individual sees themselves as a strong willed human being, they will further be perceived as this confident, superior being. Gary has shown that the mind is a powerful tool. He has exhibited great words of wisdom for any insecure child, teenager, or adult that they too can use their mind and transform themselves into a champion of sorts Furthermore, I asked Gary how he coined the name ‘Saint Lion’. Gary spoke about how during his childhood he would go to Sikh camp in Kelowna.

At this Sikh camp, he met a group of Gatka (a form of Sikh martial arts) trainers, who trained him. Through this vigorous training, Mangat won matches against his fellow Sikh camp members. His accomplishments with Gatka ignited the trainers to refer to Gary as a lion because of his dynamic display of wining matches. The name lion then progressed into ‘Saint Lion’, as a nickname that was developed by his respected Gatka trainers. Another striking moment in our conversation, Gary mentioned how he treats the day before his matches. In a serious tone, Gary notes that he thinks of that day like it is his final day in life. He makes his bed in the morning of the fight and mentally detaches himself from all his loved ones, which includes siblings, significant others, parents, and grandparents. ‘Saint Lion’ informed me that there is a low fatality rate during MMA matches; however, all fighters walk into the cage understanding that it may be their last day on Earth. Anything can happen during a MMA cage match; therefore, all MMA fighters need to be prepared for the worst. It is a well known fact that UFC matches are widely popular-many men and women make an event of it at bars or other social settings to watch the outcomes. I asked Gary about the success and popularity of MMA and UFC matches and how there are rumours that this sport is trumping the classic Canadian sport of Hockey. Saint Lion did speak more about the comparison being made within mainstream media, where Georges St-Pierre (a famous MM artist) was voted best Canadian athlete of the year, beating out Sidney Crosby (who scored the winning goal during the 2010 Winter Olympics). I asked him why MMA is so popular within Canada- why it is growing at a rapid rate. One of the key answers that Mangat provided was because of its ‘realness’ and that it is a pure mind and body match. The authenticity of MMA draws people of different backgrounds and age groups, especially when compared to its predecessor the WWE.

The WWE quickly lost its fame and hype once it was discovered that it was a false show and nothing more then a dramatic act. Gary spends much of his time training, and spending quality time with his team mates, who are Brazilian Jiu-Jitsu artists. Nevertheless, Gary stated that he does not want to get caught up with his current achievement and wants to solely concentrate on training and achieving more belt titles. “The future is more important then the present”, therefore, he is using his great mental strength to accomplish more than his current feather weight belt that he currently holds. Good luck to Gary and his new found journey to the UFC.

When the word “wrestling” is introduced into a conversation about legitimate athletes and sports, some may imagine the “wrestlers” of the WWE. Certainly some gifted people, put on stage to entertain the masses. Granted they are quite charismatic, talented, and high-flying men; however, they must not to be confused with the determined, physically and mentally strong athletes on the competition mat of freestyle wrestlers.

DARPAN Magazine had the exclusive opportunity of sitting down with Jason Garrison and learning more about the newest Canuck. Garrison, who was born in Burnaby and raised in White Rock, British Columbia, says “it means a lot” to be playing back “in your hometown. Growing up, I was always a Canucks fan.”