Satnam’s commitment and skills has proven that nothing is impossible if you have the will and desire to achieve it. Though he is just beginning his journey, he has already become a historic figure, star basketball player and youth icon for everyone.


Satnam Singh Bhamara’s road to success and stardom is one that can inspire many. At the age of 19, he became the first-ever basketball player born in India to be drafted into the National Basketball Association, popularly known as the NBA. The Dallas Mavericks selected Satnam with their 52nd pick of the 2015 NBA Draft. This selection was the onset of Satnam’s upward journey as an international basketball player, who has only soared higher in the game. The young player has played in 27 D-League games in the past two seasons and averaged 7.8 points, 7.1 rebounds along with 0.4 blocks per 36 minutes. The performance chart is only an indication that Satnam has managed to achieve what others can only dream of.

Though his road to success has been quick, it wasn’t a simple path and came with many challenges. Satnam was born in Ballo Ke in Punjab – a small village with a population of about 800. At a young age, he decided to pursue basketball and enrolled in a sports academy in Ludhiana. A few years later, at the age of 14, a 7-foot tall Satnam received a basketball scholarship to IMG Academy, a renowned sports training facility in Bradenton, Florida, United States.
The 21-year-old was just a kid when he left India to join the IMG Academy in 2010. For a young boy, being part of a sports training facility that too in Florida was definitely a dream come true, but Satnam had two basic yet major obstacles to overcome – getting accustomed to the food and learning English. There were not many places that served roti with daal in Florida – a staple diet for Satnam back home. “When I came to the USA, I had to change my diet around the food they had,” he shares.

Also, English not being his primary language, a young Satnam had to learn the language in order to be properly trained. “Hardest part of adapting to American lifestyle is the language. I had to learn the language and understand my coaches, teammates and teachers. My coaches helped me a lot with learning English. I am getting better every day,” says Satnam positively. Once you mix these two complications of language and food, the transition is incredibly difficult at the root level. When basic elements of life like these are completely revamped, it seems almost insurmountable to overcome. But Satnam was determined to make it work and made sure he got the best training and experience at IMG. A few years later, he made history by becoming the first-ever basketball player born in India to be drafted into the NBA.
The process of getting Satnam to the NBA took a unique path. The traditional routes involve kids going from high school to an NCAA college and then go to the draft after months or years of being scouted. International kids play for professional teams overseas like Barcelona in Spain and get scouted from there. However Satnam was an exceptional case. He played at IMG Academy with minimal scouting but it was his agent that effectively marketed him to the NBA. He got Satnam to the combine and the interest grew from there. “It all started when my agent informed the league of me, this young kid in India. I became eligible for the draft right after that. The next step was team workouts with about a dozen teams in the league. I was pretty nervous but confident in my abilities,” recalls Satnam, who took the rare path of entering the draft from high school, being the first player since Amir Johnson in 2005 to go directly from high school to the draft. 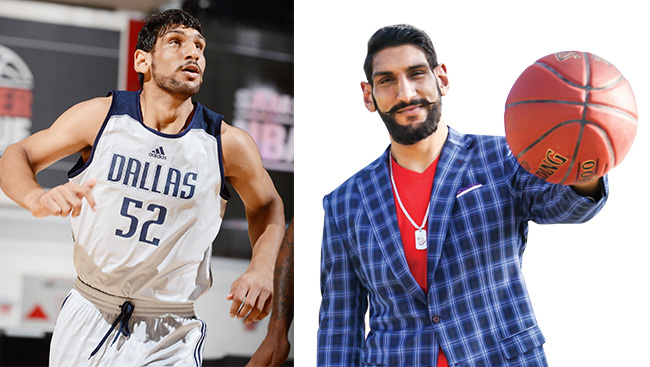 Just about half the league invited Satnam to workouts. Teams such as the Portland Trailblazers, San Antonio Spurs, and Washington Wizards took the opportunity to see him up close. He received positive reviews for his play and upside. Then on June 25, 2015, NBA deputy commissioner and CEO, Mark Tatum, stepped up to the podium and announced: “With the 52nd pick of the 2015 NBA draft, the Dallas Mavericks select Satnam Singh.” Satnam was there with his agent and representatives to take in that huge moment. ESPN analyst Fran Fraschilla described Satnam as a “long term project” but with the raw tools to become an impactful player in the NBA.
As Singh’s proficiency with English improved, he was moving on to the next stage of his development –working with a team. “Once I got better at understanding my coaches, they had me working on team philosophies. When I played in India I was pretty much the only good player. Here, everybody is good so I needed to adjust to the team mentality.”

The US coaches stressed key concepts like spacing and ball movement which are crucial to picking up the game here in North America. As a big man who can shoot with range, it was essential for Satnam to learn how to move around the court. There were also some technical aspects that needed some tweaking. “Another thing I had to work on was my footwork and strength. I was just tall and skinny before I came overseas. I’ve gone through extensive training and workouts to get stronger and more physical.”
The game is changing and young athletes are starting to adjust to these new expectations. Also, NBA teams have started to focus more on physical specimens who may not have had flashy production in their teen years but possess elite physical gifts. At a fluid 7’2” and 290 lbs, Satnam had what a lot of teams look for. Despite his game being incredibly raw and untested, the Dallas Mavericks figured they could mold him into a solid player. Strength and conditioning usually are the first drills rookies go through once they get drafted. This was emphasized even more so in Satnam’s case to make the transition from just being big, to being big and strong. 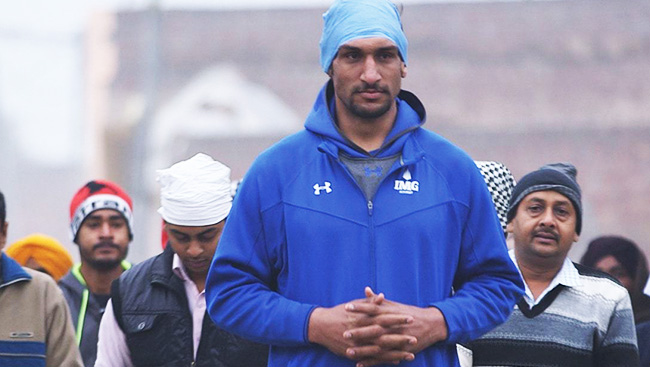 Today, Satnam’s height, passion for the game, and shooting ability have made him unbeatable on the court. These qualities are beautifully showcased in a documentary starring Satnam titled  HYPERLINK "http://variety.com/t/one-in-a-billion/" One in a Billion. The documentary, that chronicles Satnam’s journey from a young age to becoming the first Indian-born basketball player drafted into the NBA, made its debut on Netflix worldwide on December 6 last year.  Sharing his thoughts on this interesting experience, Satnam states, “There were cameras following me everywhere I went. I just got used to it after a while. When the movie came out it was cool to see myself in my own movie. All these people like the commissioner and the owner of the team talking about me and my journey.” The doc also features encouraging and uplifting words shared by the Mavericks representatives along with Satnam’s IMG coaches and teammates.
Satnam’s hardwork, dedication and love for basketball have made him one of the most popular Indian players all over the world. His skills and personality has gained him much love from youth and has motivated and encouraged young sportspersons to follow their dreams. In fact, the talented player reciprocates this love by devoting a lot of his time to youth events around the world. 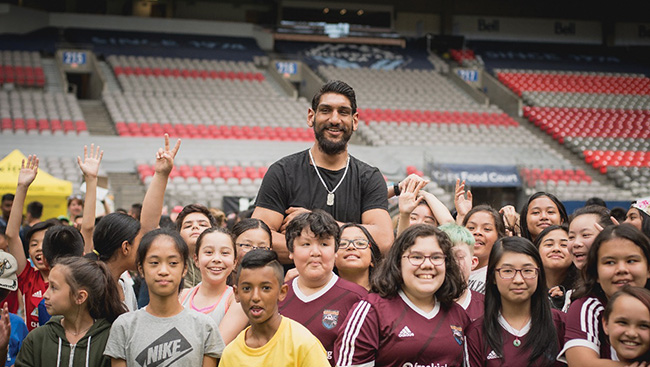 Locally, he has taken part in the drug and gang forums as well as the Satnam Singh Basketball Camp he leads. He has teamed up with Indo-Canadian athletes like Arjan Bhullar and Jas Dhillon to show young kids of similar backgrounds here that they can make a difference. Talking about these initiatives, he says, “It was my responsibility to make a difference for my country and prove to other kids in India that we have a chance, anyone can make it.” Satnam is always looking to give back to the community by participating in these events to talk to all these kids and encouraging them to focus on their goals. “The door for the NBA is opening in India. I want them to know that they have an opportunity.” When you consider the growth of basketball in BC, specifically the higher number of Indo-Canadians playing basketball, having someone like Satnam Singh involved is huge for the community. 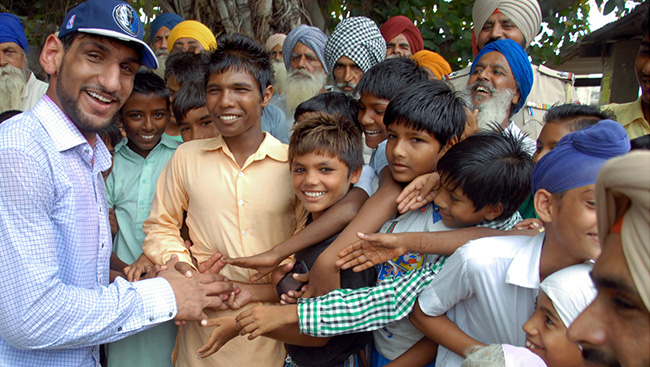 India has a population of over 1.3 billion people but they’ve never had anyone make it to the NBA. Satnam made history by being drafted and he has done everything he can to share his story with the world to inspire younger generations. These camps reinforce his values in sports and also make a positive impact in the community with respect to young leaders. Satnam wants them to realize their potential and understand that they can make their dreams come true with hard work and determination.
Coming back to basketball, with all the things Satnam has going on, he remains focused on his career. “My next step is to just keep training and working out. Playing in the NBA is the ultimate goal. To reach that, I have to keep working hard. Anytime there’s an opportunity, I have to break down the door and take it. That has been my thought process during my development and will continue to be how I strive for my next goals,” says Satnam who preaches the very same principles to all the children he works with. 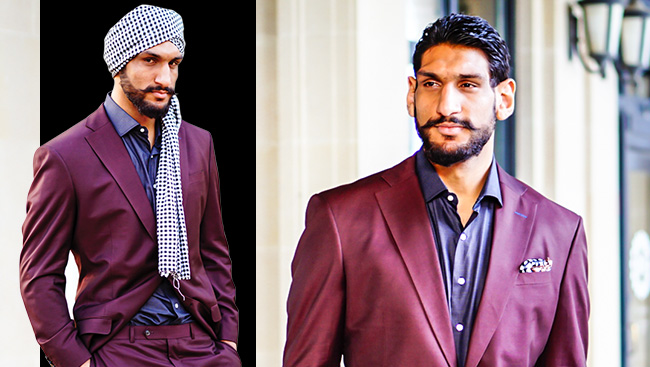 Satnam’s commitment and skills has proven that nothing is impossible if you have the will and desire to achieve it. Though he is just beginning his journey, he has already become a historic figure, star basketball player, and youth icon for everyone. It is hard to believe that he is only 21 years old as he has accomplished so much on and off the court. The future of Satnam Singh Bhamara cannot be predicted, but he intends on writing his own destiny.
Satnam’s Top 5 favourites
Favourite food: Chicken and fish
Favourite movie: Singh is Kinng
Favourite singer: Gurdas Mann
Favourite actor: Akshay Kumar
Favourite player: His teammates
Photos: Fernando Medina, NBA Photos/Getty Images; Glenn James, Dallas Mavericks; Austen Dor Photography; courtesy Satnam Singh
Prev Next

“My family is very supportive; they always wanted me to be happy – and that meant playing soccer professionally. My dad has always been by my side, taking me to practices all the way to either the University of British Columbia or Simon Fraser University; and of course my mom, who would love making meals for me when I would come home tired from practice. Without their support, I couldn’t have done it.”

Atwal was drafted into the Western Hockey League (WHL) by the Prince Albert Raiders in 2010 during the Bantam draft at the age of 14.

DARPAN had the chance to speak with Alexander Edler about the current season, how he stays calm and his career-long tenure with the Canucks.