“My mission is to serve as a practicing clinician and social innovator who empowers all people to achieve self-actualization, by giving them access: to their health, to their human rights, to their full potential.”

Sejal Hathi, an internal medicine resident physician at Massachusetts General Hospital in Boston, has been making impacts in the filed of primary care, women and girl empowerment, and social welfare since her school years. The 27-year-old has served as a USA Ambassador to Ashoka, a “For Girls in Science” Ambassador to L’Oreal USA, an Innovation Advisor at the U.S. Small Business Administration, and an adviser on youth development and women and girls to the U.S. State Department, UNESCO (U.S. National Commission), Youth Service America (Board member), the World Bank (YDP Network Board), Girls for a Change (Board), and State Farm Insurance (Board).
Sejal’s own patient experiences inspired her to pursue medicine as a career. “I did not so much choose medicine as it chose me,” she states. At the age of 15, she felt her “whole world shattered” when she was diagnosed with anorexia nervosa. “But in my journey to recovery, I also discovered the capacity of good medicine to heal: the power of gentle words simultaneously to restore and galvanize; the solace of a caregiver’s simple presence; the marvel of a science defined by its heritage in the dignity of life,” she shares, about the experience that encouraged her to take up medicine. “I realized how critical health is to achieving self-actualization: that quality care is a foundational human right, because without it, no matter a person’s other resources, intellect, education, or talents, no individual can aspire to beyond her basic needs.”
Beyond medicine, Sejal is deeply passionate about improving opportunities for women and girls. She started the non-profit, Girls Helping Girls, when she was 15, and the social organization, girltank, at 19, that aims to socially and economically empowering young women globally. Galvanized by own struggles and the inequities she witnessed against girls worldwide, she determined to found an organization that would embolden girls to discover their voice and collaboratively effect positive change.
“Initially, we were just girls helping girls, the eponym for a nonprofit that evolved to teach girls globally how to design and implement social change, while sponsoring their secondary education. Then arose girltank, a community born to support the most promising of these changemakers, by building their capacity as entrepreneurs to sustainably address local development challenges,” recalls Sejal, who has served a two-year term on the U.N. Secretary-General’s expert advisory group for women’s and children’s health. Over time, these organizations rippled into a global, girl-run movement that incubated and trained, mentored and mobilized more than 32,000 young women in 100 countries. 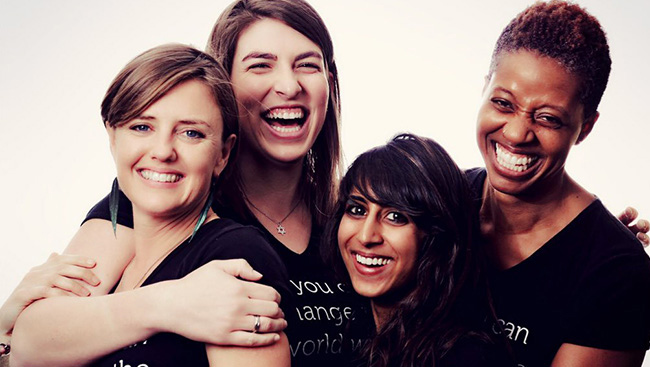 One among the notable organizations she spearheaded is The Arena, where she is now a board member. The national nonprofit was founded in the wake of the 2016 U.S. presidential election, to mobilize the next generation of progressive leaders. “Against the fear and racism and hateful rhetoric that spiked in the election’s wake, many of us felt compelled to speak up and fight back. The Arena was born in the midst of this crisis, because some of these same people – strangers who became friends – decided one of the boldest actions we might take is to elevate those voices of reason – of compassion, of integrity, of substance – we most admire in our generation, and run for office ourselves,” she says, further explaining, “In other words, perhaps the most powerful way we might #resist an administration, which so flagrantly assaults our values, is to assume the mantle of leadership and, ultimately, enter ‘the arena.’”
In less than three and a half weeks from election day, The Arena pulled together a national summit that drew more than 400 attendees from 32 states to Nashville, Tennessee, for talks, trainings, and community-building workshops on how to assume the mantle of civic and political leadership. “Since then, The Arena community has only continued to grow, supporting over 25 Fellows for all levels of political office – in this 2018 midterms cycle, not one has lost a primary – and organizing its fifth national Summit in Philadelphia this September,” adds the young leader.
Sejal has played many roles: from social entrepreneur to grassroots organizer to policy advisor to now doctor. She is determined to introduce change to enhance the lives of people worldwide. “My mission is to serve as a practicing clinician and social innovator who empowers all people to achieve self-actualization, by giving them access: to their health, to their human rights, to their full potential,” she declares.

Is there enough awareness on health care and effective policies at the grassroots level?

Healthcare in the United States is complicated – and administered by one of the most byzantine systems in the developed world. Americans also are plagued by low health literacy, with some surveys finding that less than 10 per cent of patients grasp the terms of their own health insurance. It’s difficult to navigate effectively a system one doesn’t understand – let alone advocate for something better. Luckily, there are many incredible organizations working to address this challenge – from Doctors for America to Protect Our Care to the new United States of Care. Together, we must continue to place pressure on our lawmakers to amplify and not reverse the gains in coverage and equity achieved by the Affordable Care Act.

In his senior year, with the support of classmates, teachers, and local community members, Bal managed to set up the school’s first blood clinic signing up close to a 100 donors in a single day.

For many people, religion is just a set of rules, something they ought to do. Gurumustuk Singh Khalsa continues to work towards changing this.

Simran Walia: A Leader in the Making

Simran Walia: A Leader in the Making

Vijay started his musical journey by first learning various instruments at home with his father.

Though he wanted to learn weightlifting quite early on in his life, there weren’t many opportunities to do so in his hometown of Dhaliwal, in Punjab, India.