I first saw the Volkswagen Golf SportWagen - it’s spelled Sportwagon here in Canadia, FYI - at the Los Angeles International Auto Show last year and knew it was going to be something special. While “station wagon”is considered a taboo term down south, in the Great White North we don’t seem to mind a practical vehicle that allows us to function in adult mode without having to transition to a SUV or minivan.

Offered in both a gasoline TSI 1.8-litre with 170 horsepower and a TDI 2.0 L with 150 hp, I gleefully was able to test the latter on a 970-kilometre drive from Vancouver to Calgary. The magic number for the diesel variant is 236 - that’s how many pound-feet of torque is available at a lowly 1,750 rpm, which means available power almost immediately when you need it.

First, lets talk about how it looks. If you like the standard Golf/GTI shape, then by extension you should love the wagon. It’s really just a stretched out version: basically imagine an elongated hatchback, with some slightly different bumpers, taillights, liftgate and a set of roof rails.

My range-topping Highline trim tester was equipped with lots of creature comforts, like a huge panoramic sunroof, ambient LED lighting and dual zone climate control. Then there’s the leather-covered sports seats, with 12-way power adjustability for the driver, that I can’t praise enough. On my 11-hour trek to Alberta, I often drove for three to four hour stretches at a time. Never once did any part of my body cramp up, and I think a lot of that has to do with the wonderful lumbar support offered. 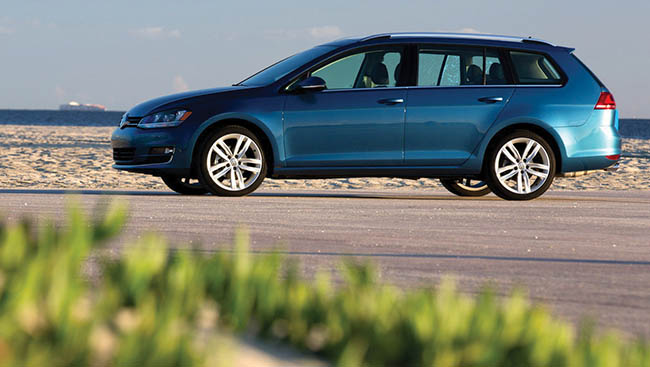 As with other cars in the lineup, the navigation system is intuitive and fairly quick - big assets when finding one’s way in a different city. Nowadays we all need to charge our mobile devices, and I was shocked that my Sportwagon didn’t have USB ports. It’s coming in 2016 models when the company launches a new infotainment platform, but that provided little solace during my trip. There is a proprietary cable for Apple devices, but the way it’s designed, if you have a case on your phone (who doesn’t?) you may have to remove it before you can plug in.

On the road, the cabin is whisper quiet. There is a faintest lumpy engine sound characteristic of diesels, but highway noise is kept to a minimum. At 903 millimetres, the rear legroom isn’t as spacious as you would guess given the form factor, but there’s oodles of cargo space in the back: 861 L with the rear seats up, and 1,883 L seats folded.

The last time I drove to CowTown, I took a previous-gen MazdaSpeed3. While the drive was fun, I remember stopping multiple times for a fill up, and sweating bullets when the “No gas for 100 kilometres”sign appeared on the side of the highway, somewhere around the halfway point between the two provinces. With the turbodiesel, I had no such worries whatsoever. I almost made it all the way to my destination without refueling, the car yielding something like 800 km on a single tank.

It turns out that Palo Alto, CA, isn’t just for the Facebooks and Googles of the world anymore, as more companies outside of the traditional tech world turn towards modernizing their products and services for the future.

The new subcompact crossover on the block.