By Benjamin Yong, 22 Jan, 2016 04:33 PM
How does one describe the legendary Ford Explorer? Many would probably just say sport utility vehicle, as the two have almost become synonymous since the debut model hit the road over 20 years ago. It has re-invented itself several times during five generations, and the latest development is the creation of the top-of-the-line Platinum edition.
I liked Ford utility marketing manager Craig Patterson’s description of the latest Explorer the best, who called it an “adventure enabler,” whether that takes place out in the wild or right in the city. The automaker held a series of media events to showcase exactly what this meant, including a cross-country driving tour and an audio technology demonstration in Ontario.
The initial part of my personal Platinum adventure began in Colorado during the #ExploreMore expedition, where drivers were given an opportunity to experience the vehicle as though out on vacation.
Whether you’ve seen the current-gen Explorer or not, there are subtle but significant differences between it and standard trim level examples, and even other cars that the company sells. A prime example is that for the first time in a production model, the oval Ford logo in the centre of the steering wheel isn’t done in the classic blue plastic, but brushed aluminum, which matches other interior pieces with the same finish.

As my driving companion and I loaded up our gear into one of the Explorers that we would be driving for the duration of the journey, I noticed a few more highlights. A conventional instrument cluster has been swapped out for a wide 10-inch digital display with analog elements. The 2016s don’t get the SYNC 3 infotainment system quite yet, but I was assured it’s coming in 2017. There is, however, a brand new Sony audio setup - more on that below.
A collective favourite part of our drive was pulling off the main highway and heading towards the Colorado National Monument, a national park near the city of Grand Junction. Taking Rim Rock Drive up the side of the plateau, there were tight switchbacks, sweeping corners and even a cave or three along the way, and as a bonus, also an amazing view of the surrounding red-clay-coloured canyons.
Although the trip to the top was fairly steep, it was not something noticeable in our Explorer powered by a 3.5-litre V6 EcoBoost producing 365 horsepower and a healthy 350 lb-ft of torque. Engines offered in other grades include a 3.5-litre V6 and a new 2.3-litre four-cylinder EcoBoost. All powertrains are equipped with a six-speed automatic gearbox and four-wheel drive.
The two of us spent the better part of an entire day on the road, taking turns at the wheel, so both of us had to assume the role of DJ on more than one occasion. Like in other Ford products, Sony provides the music equipment here, but the Platinum gets something special that has never been done before. I didn’t really fully grasp the new innovation until attending a presentation the pair of manufacturers hosted, at downtown Toronto’s Sony Centre for the Performing Arts. 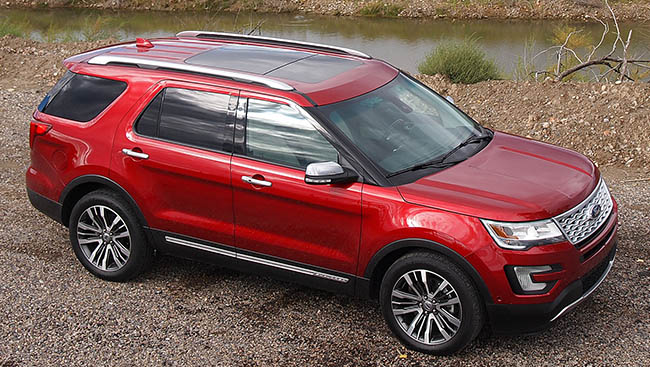 Sony liaison Tony Cheslick stood in-between a foursome of 2016 Explorers on the main stage and reminisced about the electronics giant launching their first OEM partnership back in 2001, in a Ford of course, and spoke of how they are trailblazing again by porting high-end home theatre technology to a vehicle. “[Ford] came to us and asked ‘What can you guys bring to the table?’” says Cheslick.
What Sony came up with is a 12-speaker, 500-watt audio system featuring Live Acoustics and Clear Phase technologies. The former uses a proprietary algorithm to recreate the dynamics of a concert hall, so whatever is playing out of the speakers seems like it’s coming from every direction.
The latter takes advantage of the upgraded sound deadening, thicker glass and better door seals of the Platinum and produces distortion-free sound to allow the listener to hear individual instruments in a piece. I put on the Star Wars theme song already preloaded into the playlist, and it were as though I was sitting in front of the entire brass section when the opening note hit.
The Ford Explorer was originally released in 1990, and was a traditional truck-based SUV before making the switch to the more popular crossover platform in 2011. The 2016 Ford Explorer Platinum is available now.
Prev Next