Whenever you see advertisements for sport utility vehicles on the TV or Internet, it’s usually depicting owners happily piloting their SUVs in the city to and from work, and then blasting through the country on the weekends. But how many people actually do that?

Well, I did, for one, as well a group of my colleagues during Subaru’s latest 2016 Crosstrek media campaign right here in B.C. With Vancouver’s busy central roads and rugged backyard terrain, there are few better places to see whether the manufacturer’s tagline “It’s Up for It” is an accurate one.

What it’s supposedly up for is the ability to drive the vehicle for almost any purpose and to virtually anywhere. It’s something the general purchasing population seems to be catching on to, as crossovers — especially the mini variety — are one of the hottest commodities in the industry right now.

“The subcompact utility segment has really grown from nothing, to really having people moving from cars to this segment,” says Anton Pawczuk, director of product management.

Manufacturers have clearly taken notice, from Honda with their HR-V to Mazda and the CX-3. It’s worth mentioning that the Crosstrek was one of the first on the scene, introduced three years ago, badged as a 2013.

For 2016, key changes include the removal of the “XV” portion (as its known in other markets), from the nomenclature, a revised grille, front bumper and headlamps, and different 17-inch wheels that look almost the same, except the spokes have been angled to evoke the appearance of movement. 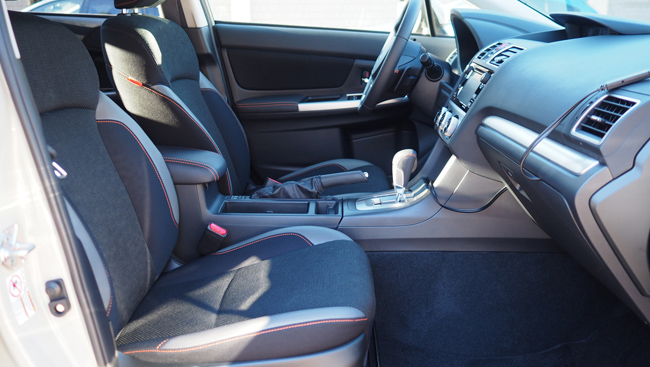 Fans of Tangerine Orange might be saddened to hear the Smurfesque Hyper Blue has been named the replacement as the new “wow” colour, but at least bits of orange live on inside the cabin in places such as the shift boot and seat stitching.  The other interior highlights, like silver and glossy black trim treatments, more intuitive controls on the steering wheel and a soft-touch armrest bring the Crosstrek up-to-date with the other products in Subaru’s lineup.

The first part of our drive took us out of the downtown core and into some twisty roads behind scenic Fort Langley. A major benefit of being more car-like than full-size-SUV-like is that the shorter wheelbase keeps the fun factor alive and well, especially when going around corners.

Although a five-speed stick shift is available, all of our testers came packaged with the continuously variable transmission (CVT). The steering wheel paddles do a good job of holding a “gear” when in manual mode, allowing you to wind out the standard 2.0-litre 148 horsepower Partial Zero Emission Vehicle (PZEV) engine when you choose to. The handful of times I encountered excessively hilly spots, acceleration felt a touch sluggish and the CVT sounded noisy as it made the ascent, but once things levelled out the Crosstrek regained its civility.

Before trying out the legendary all-wheel drive system in a low-traction environment, we were given the chance to navigate the urban jungle. First, one of Subaru’s drivers demonstrated the surprising ground clearance of 200 millimetres — in contrast, the HR-V has 170 and the CX-3, 154 — by climbing over some concrete parking lot blocks with relative ease. 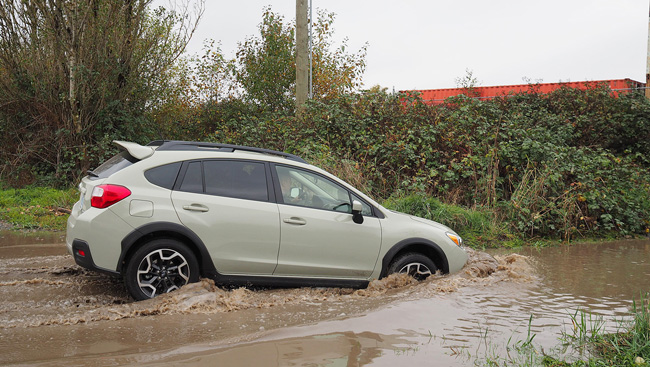 Then, I got back behind the wheel to practice emergency manoeuvres and braking in a tight slalom, which the small crossover handled beautifully. Finally, everyone lined up and it was time to tackle the off-road course, riddled with giant potholes filled from fresh rain.

Vehicle after vehicle drove in and out of the first puddle, the size of a small lake, and then proceeded to negotiate off-camber turns and up and over muddy inclines. I’m happy to report there were no incidents of anyone getting stuck or stranded.

The 2016 Crosstrek is available in a base Touring model, followed by the Sport Package and Limited Package models. A hybrid version is offered as well. For Sport grades and above, EyeSight — the digital stereo camera-based driver assistance feature that adds adaptive cruise control, lane departure warning, brake assist and more — is optional. 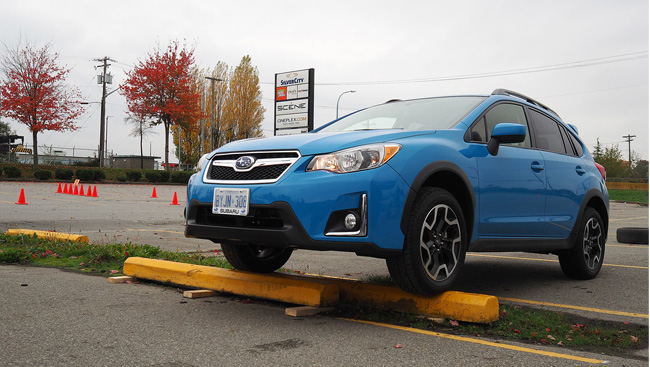 It turns out that Palo Alto, CA, isn’t just for the Facebooks and Googles of the world anymore, as more companies outside of the traditional tech world turn towards modernizing their products and services for the future.