I don’t often start off any truck review with a mention of luxury or fuel economy, but I will in the case of the Ram 1500 EcoDiesel Laramie Limited, because those are simply two of the comfortable and efficient pickup’s standout features.

Carrying over into 2016, some changes for the 1500 include the addition of the aforementioned top-of-the-line Laramie Limited in the lineup, which FCA lent us to drive for a week. Headlining the new model is a redesigned billet silver grille with huge RAM lettering prominently displayed in the centre, and matching the shiny face are big polished 20-inch forged aluminum wheels. Options, like the $450 soft tri-fold tonneau cover covering the bed, give the truck a unique and upscale look.

As cool as the outside is, the cabin is really where the magic happens. One of my passengers commented on how plush and un-truck-like the interior is, and I’m inclined to agree, though I will say most examples in the market today have really stepped up their game in this department. Without running boards on our vehicle, however, climbing up to admire the inside firsthand can be challenging for smaller folks.

Seating is taken care of by the way of leather buckets complete with all the bells and whistles: contrast stitching, heating and cooling, power lumbar support and 10-way memory driver-side adjustability. Being the Longhorn edition, our tester also had a Southwestern theme manifested through graphics – such as an outline of a Texas bull’s horns – inset into the armrest and seatbacks.

Storage is always a huge plus in a utility vehicle or otherwise, and the Limited has it in spades utilizing a new centre console that houses a cell phone and tablet holder underneath a sliding cover made from real wood. 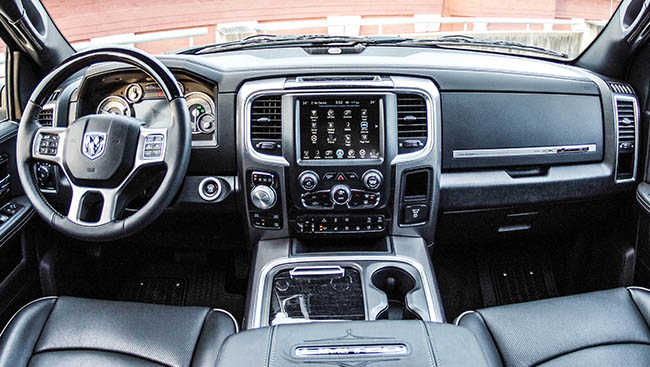 Occupants up front sit high resulting in a great view of the road, and there is loads of rear legroom for Crew Cab owners. Controls are easily accessible and the infotainment/climate controls are a cinch to operate thanks to FCA’s Uconnect system.

Responsible for the 1500's miserly fuel consumption is the turbocharged 3.0-litre EcoDiesel V6 engine, considered a small powerplant in its class. Don’t be fooled by the compact size – the V6 generates 240 horsepower and a mammoth 420 lb-ft of torque and is capable of towing up to 9,200 pounds.

Taking the truck on a lengthy trip down south on the I-5, the pickup picked up speed quickly following any application of the throttle. Although I didn’t hitch anything up in the back, the extra torque is definitely noticeable during manoeuvres like overtaking on the highway. All the while, the ride remains composed and cushy in most conditions. I am a huge fan of diesel, but some newcomers may find the noise emanating out from under the hood a bit much.

Helping the efficiency is a TorqueFlite eight-speed automatic transmission, as well as Ram’s proprietary pulse-width modulation technology that reduces the load on the alternator and parasitic energy loss. In addition, the engine has a stop/start function, and the 1500 sits on four-corner air suspension that hunkers down the truck for better aerodynamics at high speeds. The proof? I managed a pretty remarkable fuel economy average of 11.0 L/100 km in mixed city and highway driving. 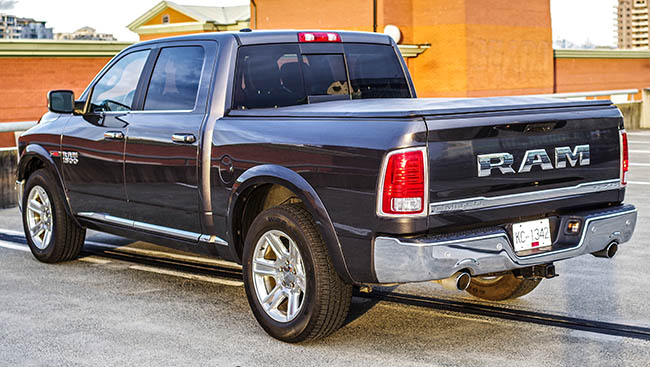