Singh has become a household name around the world, in addition, he is one of the faces of Adidas, who is also his sponsor. Over the years, I have heard about Singh and his accomplishments – extraordinary considering his age! Eagerly awaiting his arrival for our interview, I was amazed by his humility, down-to-earth nature and great sense of humour. As he is exceptionally talented, we are accustomed to hearing about this wonderful personality, but upon meeting him, he reminded me of my sweet grandfather, who is full of life and is ready to live each day. In addition, Singh doesn’t exude pride or ego.

He began his journey as a marathon runner when others his age considered retirement as a desirable option. Singh has been running for a number of years, he amusingly said, “I never ran in India, I never came to London to run.” Being the spiritual soul he is, Singh added “but our Guru gave me the push and the inspiration to be able to do what I am doing now. I have all my faith in Waheguru to help pave my path in what I am doing.” Although there has been many different reasons voiced as to why he began running – greatness does not need reason or incentive, it’s something you are born with.

Winston Churchill once said “A pessimist sees the difficulty in every opportunity; an optimist sees the opportunity in every difficulty.” Sometimes we wait for something or someone to inspire us to take hold of an opportunity. For Singh, his inspiration was more spiritual; he looked on and said “When your kismet is good, everything in your life is good, but when your kismet is bad, nothing in your life goes the way you want it to – when my kismet was bad, I faced destruction but when my kismet made a turn for the better, I met a great man from Ludhiana, Harmander Singh, my coach, who has brought me all the way to this point.” Harmander made the impossible possible and told BBC News “I only had 10weeks to train him for his first marathon. He turned up the first day in a three piece suit and a pair of trainers. But he soon got his decent gear and we haven’t looked back.” Running a marathon is not everyone’s cup of tea – but for someone of his age it seems implausible. Many people have raised the age question because of all he has been able to accomplish – which leads us to the Guinness World Records incident!

The centenarian is a world record holder in his age bracket – they don’t call him the “Turbaned Tornado” for nothing! With all that he has been able to accomplish, it was more than just a bit disappointing when Guinness refused to acknowledge Fauja Singh due to the absence of an official birth certificate. Singh was born in a Punjab village in 1911, and during this time, recording birth dates was not a formal, standardized practice; therefore many individuals do not have an official birth certificate outlining their place of birth or even date of birth. According to a 2008 statistic, about 51 million babies worldwide (two fifths of the babies born) were not registered in developing countries.

In regards to the Guinness incident, there have been powerful opinions arising in claims of discrimination; but all Singh had to say was, “I have no ill feelings regarding what had taken place. In my heart I have no regrets. I am very happy because I am doing what my Gurus have put me on this earth to do.” He is ecstatic that he has made it this far and although he was not official recognized by Guinness World Records, his name will be forever etched in the books of history.

Singh feels his biggest achievement lies in the humanitarian work he has been able to do, “the work I am doing for charity is what I want to continue to do. There is no bigger achievement than the love and respect I have received from my community. In my life, the rest of my life left in me, I hope to continue to do what I am doing now and that Maharaj continues to command me to do the same work.”

In light of the events that took place, Singh has clearly never lost faith and has carried on as he has always been – living each day with the blessings bestowed upon him. With this same positive attitude, he participated this year at the London Summer Olympics, in which he was given the honour of running with the Olympic torch. Dressed in all white, proudly making his way through the crowd (dressed in all yellow with his face imprinted on the t-shirts) marked this as “a moment in history.” 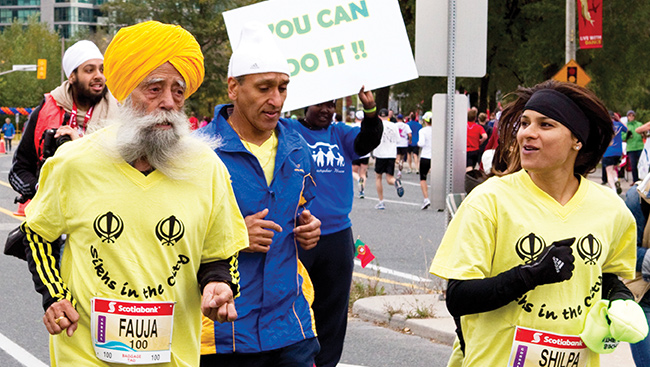 As an image of hope and embodiment of positivism, Singh talks about his Olympic experience with a twinkle in his eyes, “There was a girl like you [he said to me], who got five to seven Gurdwaras together and raised 500–700 £ from each of them. On average, the authorities agree to langar during the nagar kirtan only.” However, the Sikh communities met the authorities conditions and were allowed to serve langar during the Olympic Torch Relay. Singh continued by adding “Every Sikh, in every corner [of the route], had langar set up and where they handed me the torch, everyone there had langar. On that day, my Guru created a hope in everyone and I was humbled with the respect that was given.”

Parvinder Kaur, the woman who organized the langar in respect to Fauja Singh, told the Times of India, “We are proud to share with the public the 500-year-old Sikh tradition of serving free meals to celebrate the carrying of the Olympic Torch by Bhai Fauja Singh.” Without a doubt, this was a proud moment for all Sikhs around the world. With gratitude, Singh also explained “I am happy that my family and community lives around the world, I want them all to live their lives and be happy where they are.”

As our interview began to wind down, Singh bowed his head to his Guru wanting nothing but to bless the children of the world. A man who went through discrimination of his own, ridiculed by others, sits with a smile for all that has been bestowed upon him. He is the mere image of the rules of positive thinking. Proud as we are of this grandfather of the world for his past and ongoing achievements, we are touched by his humility and pure heart. Although Singh announced his retirement in April – who knows what is in store for this inspirational individual.