DARPAN 10 with Andrew Wilkinson, Leader of BC Liberal Party

“It is a time of renewal and we have a challenge in taking on the NDP who are moving toward a very difficult place for British Columbians. The first task is the make sure we have unity in the party all over the province.”

1. What is your main goal for the BC Liberal party?

It is a time of renewal and we have a challenge in taking on the NDP who are moving toward a very difficult place for British Columbians. The first task is the make sure we have unity in the party all over the province. I will be travelling through the province to build up those relationships with members all over BC. Secondly, to hold the NDP to account for their massive increases in taxes which are going to hurt the economy and cause a lot of trouble to British Columbians. I have worked and lived everywhere in BC so it is a very attractive idea to me to be out on the road, meeting British Columbians and hearing their concerns of what the NDP are up to and working with them to build up the BC Liberal Party.

2 Many say the party is divided especially after the leadership race, how do you plan to unite the party?

I was fortunate to have 13 MLAs supporting me from a broad spectrum of politics. So I will be going around the province meeting BC Liberals members from all corners of the province and with a wide variety of beliefs and perspectives; my task is to unite the party behind me as leader to get ready to form a government so that we can defeat the NDP.
What has happened since the leadership election is that our caucus has come together very well. We are an effective legislature against the NDP and I am delighted to see that I am so well accepted by the caucus. The task now is to talk to the communities and people of BC to give them the confidence that we are doing well in the house and bring together all the people who supported different candidates for the leadership.

3 Judging by the positive response Diane Watts received, do you have any plans on working with her in the future?

I am pleased to be taking over as leader with a whole team of very effective people helping me out, including my very strong relationship with the competitors such as Todd Stone and Michael Lee. I have reached out to Diane Watts, and she and I have an ongoing conversation about where she might want to go in the near future with her political career.

4 How will your past experience as a lawyer and as a cabinet minister add value to your new role?

It has become very clear in the last few weeks that the NDP are not very good at government. They have made major mistakes in triggering a trade war with Alberta, and having training as a lawyer is very helpful because it makes you understand how the Constitution of Canada actually works, and the NDP clearly did not understand that in the last few weeks.

5 Your top pledge during the campaign was to fight the upcoming referendum on electoral reform, what steps will you take ahead on this issue?

We are working closely with community groups to make sure that the true story about the proportional representation referendum comes out, and that it is a little more than a gift to the Green Party to keep the NDP in power. We will be pointing out to the people that they are much better off if they directly elect their MLA rather than counting on a party list to find who will be representing them.
Proportional representation encourages small parties to appear because if you get 2 per cent of the vote, then you are guaranteed one or two seats in the legislature, and that 2 percent is province-wide. So it’s attractive for people to have geographic parties, ethnic parties or religious parties, leading to a proliferation of small parties. So if we start to get parties that become geographically or ethnically-focussed, that can start to dissolve the fabric that pulls us together in this province. We have to prepare and present a program that appeals to everybody in BC, to keep us all on the same page.

6 You mentioned in your winning race that you will make the NDP accountable for its decisions, how will you do that?

The NDP has introduced a very wide range of new taxes, more than $5 billion dollars in new taxes for British Columbians and our job is to make sure these are not damaging the BC economy and hurting families, and also to make sure that their spending plans are responsible. 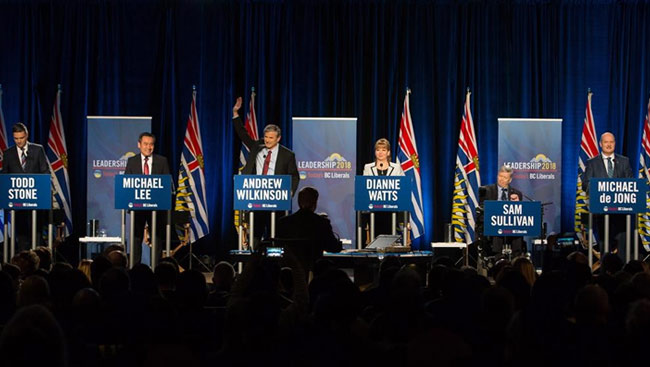 7 What are your views on the NDP’s approach to child care in BC?

The NDP put out an ambitious program for child care spaces and that is a desirable thing if we can afford to pay for it. The thing we have to keep our eyes open for is if they are simply going to be converting unlicensed spaces to licensed spaces and counting that as a part of their success. That is a problem because it does not actually create any new spaces. They have also abandoned the idea of the $10 dollar a day child care. They have set themselves at a very high standard and we will see if they meet it. Also, part of paying for all that is bringing in a whole series of property taxes.

ICBC is now a 45-year-old NDP-created state-run monopoly, and I question whether it is a right model at all. It is very easy to talk about tinkering with the caps on injury rates and premiums and so forth but we have seen that the financial picture of the ICBC has been deteriorating in recent years, and the idea that it can be fixed with a single tweak is unlikely to be true. My view on auto insurance having been a defence lawyer for 25 years is that we need to focus on who needs to benefit there. The motorist needs reasonable premiums on their insurance and the injured need reasonable compensation and we are straying away from both of those things right now.

9 The NDP has announced that the Medical Services Plan (MSP) premiums would be completely eliminated from 2020. What are your thoughts on this decision?

The NDP are going to phase our MSP premiums which is a continuation of BC liberal policy. We cut them by half a year ago and they are going to cut them off completely but not for another year. In the meantime, they are increasing employer’s health tax. So in 2019, double premiums will be paid, both the MSP and the employer’s health tax. The Richmond School Board has calculated that this will cost them $2.2 million dollars and they have no revenue to compensate for it. So their only alternative will be to cut down the number of teachers or programs. Clearly this is tax grab that the NDP needs to balance the budget and it has been done out of the pockets of employers and organizations. This is a very poorly thought of tax grab made by the NDP.


10 What is your message to BC Liberal party members and supporters?

The BC Liberal party is in the middle of a big renewal and we are working to broadening the base of the parry. It will allow us to take in new ideas from all over BC and prepare for a broadly-based election platform that will appeal to the interest of people in their own daily lives, to make sure we don’t repeat the mistakes of the 2017 election where we were talking big macro terms and not talking about what affects peoples daily lives.
We had a very strong leadership race where we doubled our membership. We had heavy involvement from people all over the province who were concerned about the future of our province and have a positive view of BC as a land of opportunity. It is my job to make sure that BC continues to be a place where people can enjoy their lives and get ahead.
Prev Next